Move over Manolo! White trainers are the new heels with the smart set now wearing trainers to the glitziest occasions but, asks DINAH VAN TULLEKEN – is it a fashion crime or a feminist triumph?

When actress Emma Thompson, above, went to the Palace to meet her prince for a Damehood from Prince William, she wore rather more prosaic footwear: a pair of white trainers

When Cinderella met her prince at the palace ball, her feet were famously shod in a pair of delicate glass slippers.

When actress Emma Thompson went to the Palace to meet her prince — she received a damehood from Prince William on Wednesday — she wore rather more prosaic footwear: a pair of white trainers.

While no rules dictate what to wear for such events, traditionalists will have raised an eyebrow at such casual shoes, which she teamed with a Stella McCartney trouser suit. Dame Emma isn’t one to follow convention.

Still, the fact that white trainers have made it to the grand surroundings of Buckingham Palace shows just how far they have come from their humble origins as sports shoes most frequently found on a teenager’s smelly feet.

Rubber companies may have started producing ‘sneakers’ as a way to utilise spare rubber more than 100 years ago, but they’re now the most beloved footwear of female celebrities, with ‘must-have’ styles by high-end designers commanding eye-watering prices.

Gucci’s jewel-encrusted design are on net-a-porter for £1,080. Christian Dior’s simple white trainers retail at £640 and Roger Vivier has a pair of slip-ons for a whopping £870.

White has become the colour of choice because it signifies wealth: the illusion is that you can afford new pairs constantly to keep them looking pristine and you travel by taxi rather than foot for fear of scuffs.

Some establishments, such as The Ritz, still ban them, and many others consider them inelegant and inappropriate for a formal occasion, but still it’s become de rigueur to wear them to posh parties, restaurants and the theatre.

And where celebrities start a trend, middle-class women follow. Retail data shows just how much the market has grown.

In January 2013, there were 1,203 trainer designs available online in the UK. Two years later that figure tripled. Then, two years ago, sales of trainers outstripped those of high heels. 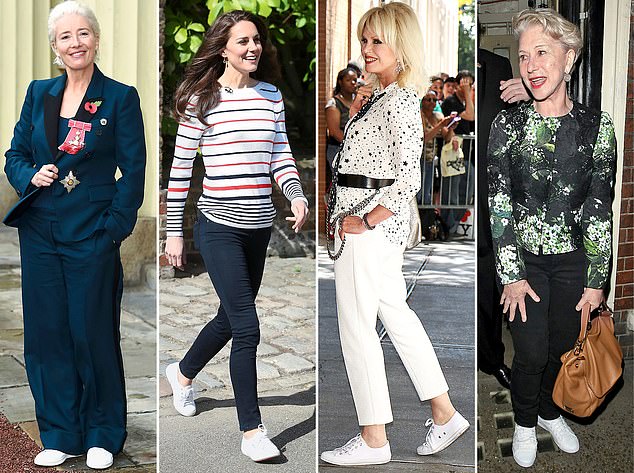 Emma Thompson, left, in vegan trainers at the Palace this week to receive her damehood. Also pictured in white trainers, from left to right, are Kate Middleton, Joanna Lumley, and Dame Helen Mirren

So how did trainers make the leap from sports field to red carpet?

While Gucci produced the first designer trainer in 1984, it was another Italian design house, Prada, that really started the trend for designer trainers in the mid-Nineties.

The iconic black or white style was the first that was part of a fashion collection.

White trainers then became a ‘must have’ for stylish women everywhere after British designer Phoebe Philo, the coolest woman in fashion, wore a white pair when she came onto the runway at the end of her autumn/winter 2011 show for Celine.

Wearing trainers with black trousers, a grey roll-neck and minimal make-up, she epitomised the effortless chic that so many women aspire to. 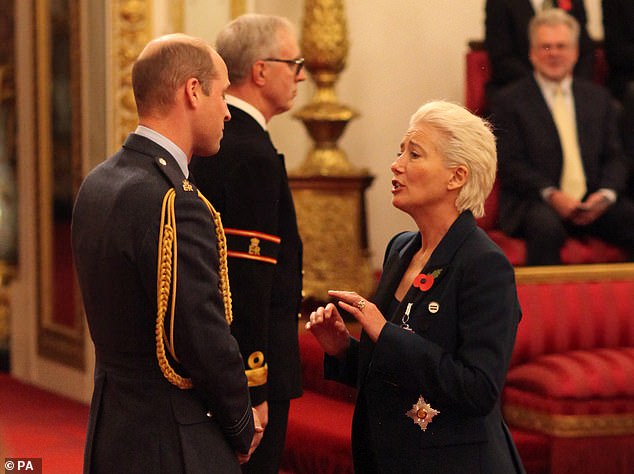 The fact that white trainers have made it to the grand surroundings of Buckingham Palace shows just how far they have come from their humble origins as sports shoes. Thompson was made a Dame by the Duke of Cambridge, left, on Wednesday

It was no surprise, then, that the following February, Victoria Beckham ditched her trademark heels for her own pair of white trainers when she took to the runway at the end of her show that cemented her reputation as a designer.

Whereas once the fashion crowd would not have deigned to attend a show in anything less than sky-high heels, now they began to look out of place on the front row if they weren’t wearing trainers.

At the Chanel Haute Couture show in 2014, Karl Lagerfeld dressed every model in trainers. The look then filtered down to the High Street — and school runs everywhere.

Part of the appeal is they can be worn by the young and old — from Joanna Lumley in her 70s to Lady Amelia Windsor, in her early 20s.

There are other, intriguing explanations as to why we’re turning to trainers. Research shows that in political uncertainty women often choose lower shoes, perhaps from a unconscious urge not to be vulnerable in an emergency situation.

Another train of thought attributes it to the #MeToo movement, with feminists rejecting ‘man-pleasing’ fashion in favour of comfortable, unisex styles.

But there are rules to follow to getting them right. The trainer trend does not include running shoes that you’ve actually been running in.

They need to be new, with no scuffs. And if your footwear is casual the rest of the outfit has to be smart, like Helen Mirren in her tailored black trousers.

Of course, the reason many women find trainers appealing is that they are comfortable. Dame Emma’s feet wouldn’t have been hurting like Cinderella’s.

And unlike the fairy story heroine, she would have had no cause to leave one of her shoes behind at the Palace.