Home » Lifestyle » WHO chief reveals the truth about herd immunity

WHO chief reveals the truth about herd immunity 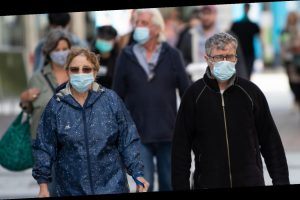 Without a cure or vaccine for COVID-19 in sight, it has been left to politicians like White House pandemic adviser Scott Atlas to propose that herd immunity might be the only way to fight the pandemic. The Washington Post has reported that the Trump administration has begun to implement the idea that allowing the coronavirus to spread will allow the population to build a resistance to the virus. To that end, the head of the World Health Organization is now warning that allowing the coronavirus to spread with the expectation that everyone will eventually become immune is “problematic.”

“Herd immunity is a concept used for vaccination, in which a population can be protected from a certain virus if a threshold of vaccination is reached,” the Director-General of the World Health Organization, Tedros Adhanom Ghebreyesus, said during a press conference. “Never in the history of public health has herd immunity been used as a strategy for responding to an outbreak. [It is] scientifically and ethically problematic,” he said (via WHO).

The WHO chief compared measles to COVID-19 — 95 percent of the population is immune to measles, but less than 10 percent is immune to the coronavirus in any form. Given these circumstances, “letting the virus circulate unchecked, therefore, means allowing unnecessary infections, suffering and death”, he added.

There are no silver bullets for COVID-19, WHO chief

The WHO’s Director-General came out to speak at a time when cases in Europe and the U.S. are increasing once again. “Many cities and countries are also reporting an increase in hospitalizations and intensive care bed occupancy,” he said. And because we are in a situation that Tedros calls an “uneven pandemic,” he said every country is responding differently and with different tools ranging from isolation, testing, and preventing mass gatherings. Tedros told reporters, “It’s not a choice between letting the virus run free and shutting down our societies.” And while Tedros says, “We well understand the frustration that many people, communities and governments are feeling as the pandemic drags on, and as cases rise again, there are no shortcuts, and no silver bullets” (via WHO).

To highlight the uncertain nature of the disease, the possibility of seeing people reinfected with COVID-19 has re-entered the news. The New York Post reported that an elderly woman had recovered from COVID-19 earlier this year, and two months later was readmitted to hospital and died. A man in Nevada was also reportedly infected with COVID-19 twice (via NPR). Maria Van Kerkhove, leader of the WHO’s COVID technical team says that an estimated 0.6 percent of those infected with COVID-19 die, and  while it didn’t sound like a lot, “[it was] a lot higher than [for] influenza” (via The Guardian).

The WHO didn't say lockdowns were ineffective

What Tedros did not say outright, was that lockdowns are ineffective, contrary to claims made by President Donald Trump on Twitter: “Actually, Tony’s [Dr Anthony Fauci] pitching arm is far more accurate than his prognostications. ‘No problem, no masks.’ WHO no longer likes Lockdowns — just came out against. Trump was right. We saved 2,000,000 USA lives!!!” What Tedro actually said: “We recognize that at certain points some countries have had no choice but to issue stay-at-home orders and other measures to buy time. Many countries have used that time to develop plans, train health workers, put supplies in place, increase testing capacity, reduce testing time and improve care for patients. WHO is hopeful that countries will use targeted interventions where and when needed based on the local situation” (via WHO).

The WHO aside, the Twitter-verse appears to be reacting to the president’s perceived attack against Dr. Anthony Fauci. One commenter posted, “Dr. Fauci is an American treasure. You should be ashamed of yourself!” Another user responded to the president’s tweet, noting: “No doubt, sir. Everybody respects you and believes everything you say. I was confused why you made an ad with him praising you when he’s such a hack.”

END_OF_DOCUMENT_TOKEN_TO_BE_REPLACED

END_OF_DOCUMENT_TOKEN_TO_BE_REPLACED
We and our partners use cookies on this site to improve our service, perform analytics, personalize advertising, measure advertising performance, and remember website preferences.Ok