Home » Lifestyle » Who will replace Samantha Armytage as co-host of Sunrise?

Who will replace Samantha Armytage as co-host of Sunrise? 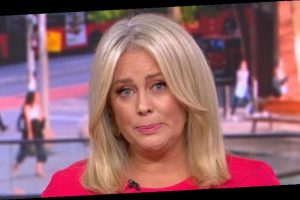 When Lisa Wilkinson quit Nine’s Today show in 2017, virtually every female TV presenter in Australia was rumoured to become her replacement. Many of these women did little to counter such gossip, which served only to bolster their bargaining power during their next round of contract negotiations. In truth, the Nine Network (now the owner of this masthead) had a relatively short list of genuine contenders. To no one’s surprise, Nine gave the job to former Today newsreader Georgie Gardner.

When Samantha Armytage tearfully resigned as co-host of Seven’s Sunrise on Monday, it sparked an equally-febrile burst of speculation, with Sarah Harris, Sonia Kruger, Kylie Gillies and Monique Wright all named as possible successors. But such conjecture should be taken with a grain of salt. Just as Nine opted for what appeared to be a safe choice in Gardner, Seven will almost certainly follow suit. 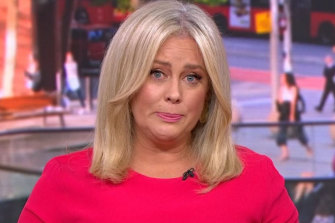 Samantha Armytage has announced she is stepping down as co-host of Seven’s Sunrise.Credit:Seven

Attributing her resignation, in part, to the “bittersweet” events of her personal life – including her recent marriage to Richard Lavender and the death of her mother – Armytage told viewers she would “step out of this public world for a while to take some time and calm things down”. She will present her final episode on Thursday. Later this week, Seven will announce her replacement, who will join long-serving co-anchor David Koch.

Sources at Seven, who are not authorised to comment publicly, emphasised the advantage of elevating an existing Sunrise cast member such as Weekend Sunrise co-anchor Monique Wright or Natalie Barr, who currently co-hosts Sunrise on Fridays.

Multiple insiders say that Barr is the clear frontrunner.

“We have a very strong stable of female talent on Sunrise so it would make sense to promote internally,” says one executive, pointing out that Kruger’s prime time hosting commitments on Seven – including Big Brother, The Voice and Holey Moley – leave little scope for a move to early morning TV. Meanwhile, most external candidates, including Studio 10 co-host Sarah Harris, remain contracted to other networks until at least the end of this year.

As Seven continues to trail Nine in prime time, it can ill afford to lost its breakfast TV crown.

“We can understand why Sunrise might want to snap [Harris] up,” A Ten spokeswoman says. “But rest assured, she’s not going anywhere.”

Sunrise’s entertainment presenter, Edwina Bartholomew, and Kylie Gillies, co-host of Seven’s The Morning Show, have both impressed their bosses but the popularity of Barr – who consistently attracts high approval ratings in viewer research conducted by Seven – gives her the edge.

“I’m sure that [Seven CEO] James Warburton and his executive team have already wargamed this,” Allen says. “They need someone who can not only handle themselves during live news crosses, but who is skilled in that studio magazine format – which is a lot harder than it looks. There’s a reason that [successful breakfast TV anchors] are not a dime a dozen. You need someone who the viewing public can relate to and feel warmly towards.” 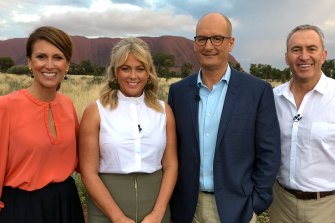 Having already proven herself in this respect, Barr has the added advantage of being familiar to Sunrise’s audience.

“When people are wandering around in their undies in the morning, they’re selective about who they invite into their homes,” says media analyst Ben Willee, general manager of the Spinach advertising agency. “Seven successfully managed the transition to a new Sunrise host in 2013, when Sam replaced Mel Doyle. Having Kochie there with one hand on the tiller was an important part of that transition because it maintained that sense of familiarity.”

Each year, advertisers spend an estimated $120 million across Sunrise and Today. Eager to claim a slice of this revenue, Network Ten poured millions into two failed rivals: Breakfast, which was launched and then cancelled in 2012, and Wake Up, which aired from 2013 to 2014.

So far this year, Sunrise has maintained its dominance of this lucrative market with a national audience of 373,000 compared to Today’s average of 301,000. ABC News Breakfast, which screens on ABC’s main channel as well as its news channel, is in third place with 293,=00 viewers. (Don’t be fooled by these startlingly small averages. More than 2.4 million Australians watch at least five minutes of breakfast television each morning; during major news events, this number can exceed 3 million.)

As Nine well knows, installing a new presenter is not without risk: after pairing Gardner with Karl Stefanovic, the network replaced him with Deb Knight in 2019, only to reinstate Stefanovic the following year with Allison Langdon as his new co-host.

The stakes are even higher for Seven. As the network continues to trail Nine in prime time, it can ill afford to lost its breakfast TV crown.

“TV networks are their own biggest clients,” Willee says. “Their breakfast shows are absolutely essential in terms of promoting their evening schedule, which is where they earn most of their revenue.”