Home » Lifestyle » Why does time seem to fly when we’re having fun? A new study explains 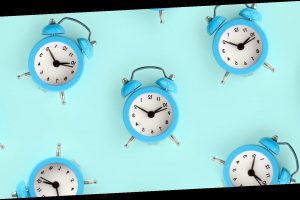 According to a new study, the activity of neurons in the ‘supramarginal gyrus’ part of the brain could explain why the way we perceive time is subject to change.

The age-old adage “time flies when you’re having fun” has never felt so relevant than in the present moment.

At a time when our ‘normal’ lives have come to a standstill and we’ve been forced to re-evaluate a lot of the things we used to take for granted, the passing of time feels more significant.

This works in both ways – when we’re able to take our minds off of coronavirus and enjoy ourselves for a couple of hours, time seems to speed by. But when we’re sat inside, worrying about the world and feeling stuck, time lingers.

With all of this in mind, the concept of how we perceive time – especially in relation to the things we’re thinking, feeling and seeing – has never been more fascinating.

And now, as if in answer to our curiosity, scientists have worked out why time appears to pass differently depending on the situations we find ourselves in – and it’s mind-blowing stuff.

According to a new study from a pair of scientists at the University of California, Berkeley, time-sensitive neurons in our brains get “worn out” from certain tasks, skewing our perception of time as a result.

According to the research, which was published in the Journal of Neuroscience, the neurons in the ‘supramarginal gyrus’ part of the brain, which processes touch and speech, become fatigued when they’re repeatedly exposed to a stimulus of a fixed duration. However, since the neurons in the other parts of the brain continue to fire like normal, our perception of time becomes skewed.

To test this, the study’s participants – 18 men and women aged between 18 and 27 – underwent brain scans while they completed tasks on a computer. To start with, they were shown a “visual adaptator” (aka a grey circle) for a set length of time. After they’d completed this step 30 times, they were then shown a test stimulus for different amounts of time and asked to guess how long it lasted.

Essentially, being show the visual adaptator 30 times in a row led to the participants’ neurons to become fatigued – meaning they were more likely to experience a skewed perception of time.

Although it’s a pretty difficult concept to wrap your head around, it’s interesting to consider how our body records time – and how little neurons in our brain can change our perception of reality.

END_OF_DOCUMENT_TOKEN_TO_BE_REPLACED

END_OF_DOCUMENT_TOKEN_TO_BE_REPLACED
We and our partners use cookies on this site to improve our service, perform analytics, personalize advertising, measure advertising performance, and remember website preferences.Ok