Home » Lifestyle » Why is Friday the 13th considered unlucky? Common myths and where it comes from

Why is Friday the 13th considered unlucky? Common myths and where it comes from 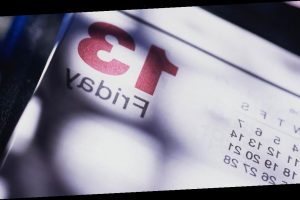 Friday the 13th has rolled around once again bringing with it its spooky mystery and supposed bad luck.

As England deals with a second national lockdown the doom-and-gloom of the unlucky date feels right on cue.

The sinister connotations of Friday the 13 supposedly date back to Jesus Christ and the last supper.

The infamous meal was attended by 13 people, Jesus and his disciples, on a Thursday – the day before his crucifixion on Good Friday.

According to legend, the number 13 has forever been associated with Judas, who betrayed Christ and regarded as one of history’s most famous betrayers.

He is thought of as the imperfect 13, compared to the 12 which represents the months in a year, The Independent reports.

Steve Roud, author of The Penguin Guide to the Superstitions of Britain and Ireland, previously told the BBC: "Because Friday was the day of the crucifixion, Fridays were always regarded as a day of penance and abstinence.

"This religious belief spilled over into a general dislike of starting anything – or doing anything important – on a Friday."

Folklorist Anne Marie Lagram says theories behind "unlucky 13" include the number of people present at the Last Supper or the number of witches to make a coven.

The author said the Victorians were the first to put two and two together, telling the BBC: “They were intrigued by folklore and put Friday and 13 together and created a doubly unlucky day."

Friday the 13th has also been traced back to the arrest of hundreds of Knights Templar by King Philip IV of France in October 1307.

Catholic crusaders were apprehended over allegations that new recruits were being forced to spit on the cross and deny Christ.

The unsubstantiated claims were convenient for Philip, who was able to persecute the wealthy and waive debts he owed to them following the war with England.

An irrational fear of the date is known as paraskevidekatriaphobia.

In Spanish-speaking countries and in Greece, it is Tuesday the 13th that frightens people. In Italy, it is Friday the 17th.

Friday the 13th happens at least once every year, but never more than three times in a 12 month period.

The ‘unlucky’ day happens in any month that begins on a Sunday.

Other folklore historians have suggested the negative nature of the number 13 originated with a Norse myth about 12 gods having a party.

The trickster god, Loki, is said to have arrived as the 13th guest and arranged for a murder to take place.

Although often assumed as being an unlucky day full of mischief and misfortune, studies have suggested that there is no correlation between the date and accidents.

In fact, according to a Dutch study in 2008, there are even less reports of fire and theft on a Friday the 13th because people are being extra careful