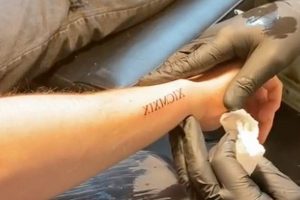 A couple who wanted to mark their first wedding anniversary with tattoos were left red-faced when the husband's inking didn't quite go to plan.

Salon owner Ashley Carlevato and realtor Alex Abramowicz got married on January 1st, 2019, and decided to get corresponding tattoos to mark the date on their bodies forever.

Ashley shared a clip to her TikTok @murphyandmay, showing how the debacle unfolded.

The video shows a clip of the pair entering the tattoo parlour with the caption: "For our first wedding anniversary we decided to get tattoos."

It then shows a clip of Ashley getting her hand tatted, with the caption: "I got his initials on my ring finger."

"And he was supposed to get our wedding date in Roman numerals on his arm," the video continues, switching to a clip of Alex getting his forearm inked.

Ashley shared the video with the caption: "I knew I should have Googled it for him."

"I want to tattoo ours in Roman numerals but I'm TERRIFIED of that happening," one person said in response.

"That's why Roman numeral tats are dumb," said another person.

It comes after a model splashed out £13,000 on tattoos to cover her entire body in colorful ink, despite admitting the process is painful.

For the latest breaking news stories and incredible tales from the Daily Star, sign up for our newsletter by clicking here.