Home » Lifestyle » Will Amelia Leave ‘Grey’s Anatomy’? This Theory Will Destroy You

Will Amelia Leave ‘Grey’s Anatomy’? This Theory Will Destroy You

Amelia Shepherd has been through a lot. From an overdosing fiancé to a stillborn baby to a brain tumor, Amelia has had her share of trauma. In the most recent episode of Grey’s Anatomy, Amelia struggled as her foster daughter, Britney, underwent surgery after an overdose. It’s been tough for Amelia, and so it would make perfect sense if she felt like she needed a break from it all. Well, that break might be coming sooner rather than later because the latest theory has fans asking: Will Amelia leave Grey’s Anatomy?

This theory all started with a little conversation Amelia had with Link in last week’s episode "I Want a New Drug." Quick recap: While Amelia waited for Britney to get out of surgery, she crossed paths with fellow surgeon Link in the hall. Link bemoaned the fact that there were so many overdose cases in the hospital. Amelia ignored his complaint and instead changed the subject by asking him where he would disappear to if his life fell apart. He said he’d go to Barbados, and Amelia cracked a smile. She told Link that Barbados sounds really nice right about now, so does that mean she might be taking flight soon? 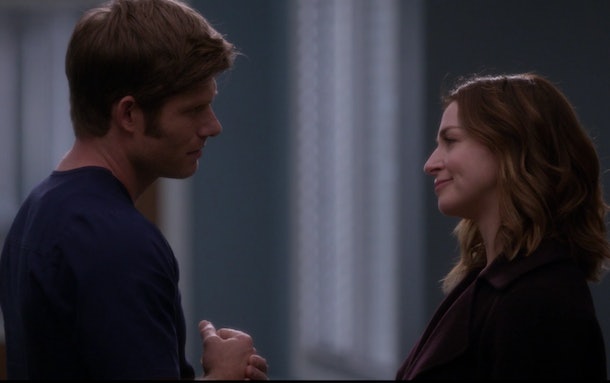 After Amelia answered Link, they stared at each other for a moment. Link leaned in a little, and for a second it looked like they might swap a little bit more than vacation destinations. Could it be that Amelia will not only leave Seattle, but she’ll also break things off with Owen for Link? Some fans think that this scene hinted at a new relationship blossoming for Amelia and Link. Amelia has been paired up with Owen for most of her time on Grey’s Anatomy, and so it would be really exciting to imagine her trying out a new relationship. Link would be an excellent choice; he’s known around the hospital for his cheerful demeanor and Amelia sure could use some cheering up.

Amelia and Owen have been having a rough go of things in their relationship lately. They had built a family unit with the two of them and their foster children Britney and Leo. But, with Britney and Leo both going back into the custody of Britney’s parents, the bonds that held their family together are quickly falling apart. Meanwhile, Owen is also about to have a baby with his friend Teddy. With Owen starting a new family (and maybe a new relationship with Teddy?), that leaves Amelia out of an important piece of his life. Amelia might feel even more of a wedge growing between her and Owen, and then have even more reason to leave.

No matter what happens to Amelia, fans agree that it’s tough watching her deal with so much loss in her life.

Whether or not Amelia leaves Grey’s Anatomy, the character deserves to have a little more happiness. If she doesn’t leave for good, maybe she can at least book a quick vacay to Barbados? It’s probably a lot sunnier there than it is in Seattle.