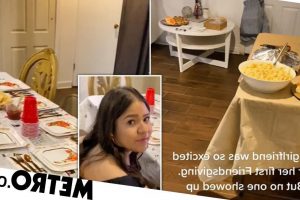 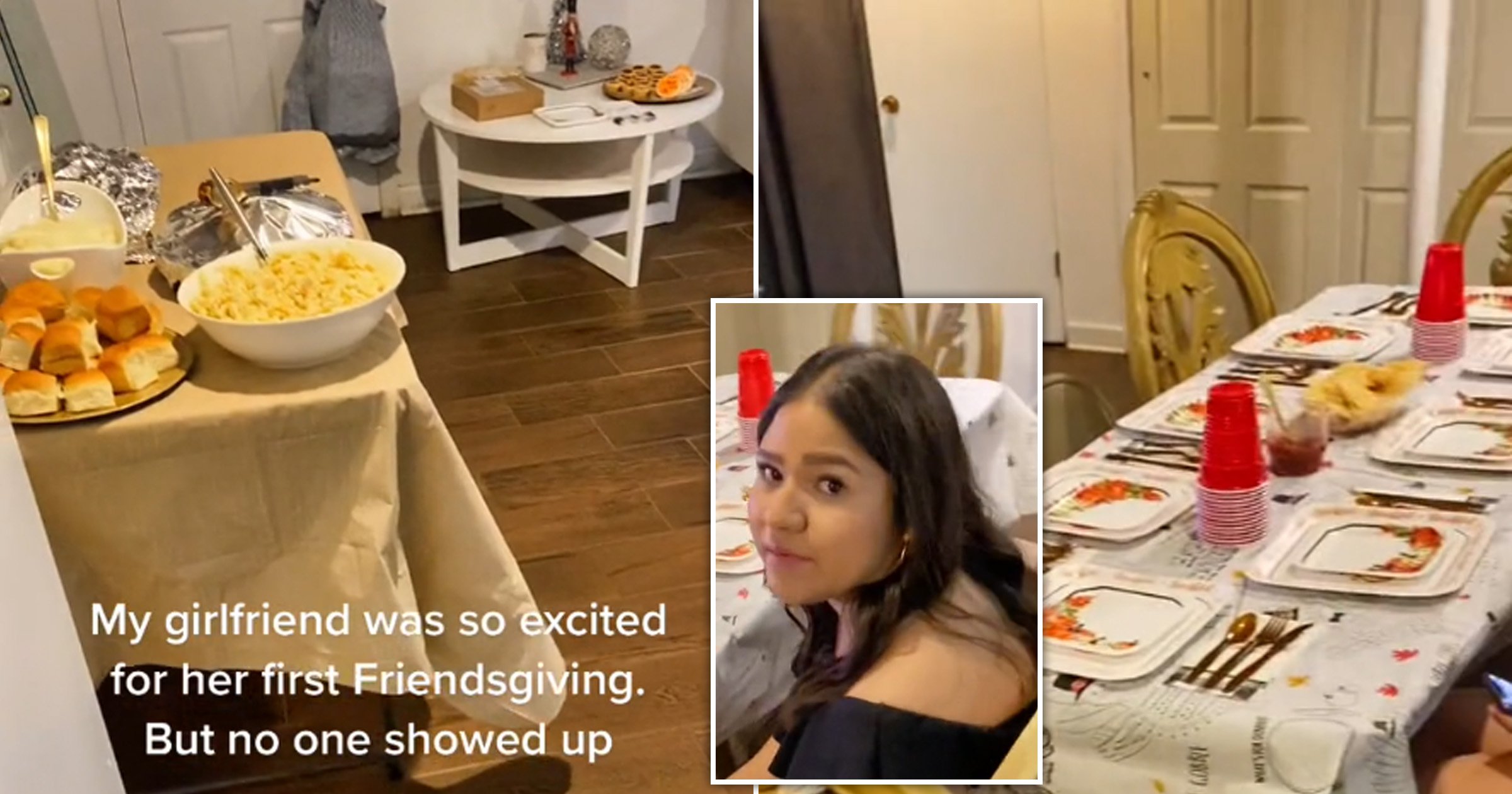 A young woman was left crushed after her friends failed to show up at her ‘Friendsgiving’ dinner.

Christian Zamora, whose username on TikTok is @Kidalloy, explained in a video how his girlfriend Maryann had spent hours preparing for the occasion.

Planned two weeks in advance, Maryann’s basement was fully decorated and she cooked a huge dinner for all her friends.

Unfortunately, her so-called pals stood her up and according to Christian, they didn’t even send a message to let Maryann know they wouldn’t make it.

‘My girlfriend was so excited for her first Friendsgiving but no one showed up,’ Christian wrote in a clip that has been viewed more than 14million times.

‘She decorated the whole basement and cooked so much food. I keep trying to cheer her up but nothing is working.’

Christian panned around the room with his camera to show viewers the table filled with food and the subsequent table settings which were empty.

Maryann can also be seen sitting alone and close to tears.

He captioned the video: ‘I’m so sad for her.’

In a second video posted on his page, Christian explained that when the day came, Maryann’s friends suddenly stopped answering all of her messages.

‘My girl and her friends decided to throw a Friendsgiving like two weeks in advance, they were planning this for two weeks,’ he said.

😭 I’m so sad for her #friendsgiving #thanksgiving #friends

‘They were planning everything, everything was all set – the date, the time, and everything. They were all gonna come.

‘But the day came and no one was answering the group chat. No one was texting or calling, but in her mind, she thought everyone was running late. When it hit the three hour mark, she was like, “Yeah no one’s gonna come.”’

In a beautiful move, Christian decided to contact his own friends to see if they would join in the festivities.

‘She called me and told me what happened so I started heading over to her house. On the way there, I called my friends. I told my friends, “Hey, are you [open to] coming to my girls Thanksgiving?”‘ he said.

‘They were more than gracious enough to come. They all came and brought stuff. It’s like she had her own Friendsgiving, there was a happy ending to it.

‘She wasn’t upset, she wasn’t mad, she was kind of disappointed about her actual friends not showing up but other than that, she still had great company and she still had a great time.’

Meanwhile, in the comment section, huge numbers of users came out in support of Maryann with many offering to be her friend.

‘Honey, I’m so sorry this happened to you. Your set up looked awesome! Shoot, I woulda turnt up with you in a heartbeat if I was your neighbor,’ one viewer wrote.

‘I will show up right now? Where ya at?’ added a third.

In a video posted on her own page, Maryann thanked viewers for their support and said: ‘I have a bunch of new friends on here, so thank you all so much.’