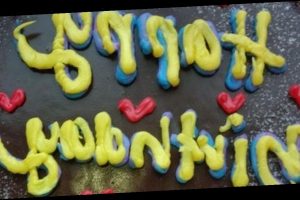 Sending someone a surprise birthday cake is definitely a thoughtful idea, but sometimes it doesn't always go to plan.

One recipient was left feeling rather confused on their big day when they received a delicious-looking chocolate cake with a hilarious message on top.

Their friend who ordered the cake, no doubt specified the writing she wanted iced on – but somewhere along the way, the message clearly got lost in translation.

Unsurprisingly, a picture of the cake was shared on Reddit's Cake Fails forum. Alongside the image, the person who posted it wrote: "Friend sent my mom a cake; she even typed quotation marks and everything!"

"I don’t understand how people like that can manage to survive in life long enough to do something like this," one person commented.

"You’d think their stupidity would have killed them early."

Another asked: "How do these people still have jobs?"

However someone else suggested that people were being unfair as English might not have been the baker's first language.

They said: "Posts like these make me think about the person who wrote it on the cake. English may not be their first language so they just follow the request that was given to them in the most literal sense.

"Obviously there should be somebody who double checks the work going out, but I wouldn't say the person is incapable because they didn't understand what they were writing."

The epic blunder comes after another person revealed just how easy it is to make a homemade cake using a slow cooker.

The method for an easy Mars Bar Rice Krispie Cake was shared on an Australian Facebook group for keen crockpot cooks.

All you need to whip up the pud is a few Mars bars, golden syrup, puffed rice cereal and milk chocolate.

We don’t need to tell you to enjoy this treat in moderation – with an ingredients list like that its definitely rich.