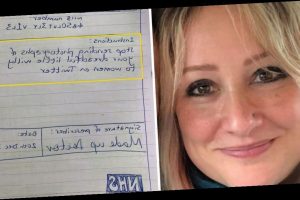 A woman decided to take matters in her own hands after being sent shocking pictures from a random man on Twitter.

Becky Holmes, 42, pretended to be a doctor after the pervy bloke sent her a picture of his "tiny shrivelled insignificant penis".

He followed it up by sending Becky crude "compliments" praising her "bl*wjob" lips and describing what he would like to do to her.

Shocked, Becky decided to take a "medical" view of the sleazy stranger's images.

She began to point out yellowing "jaundice" in his pubic hair, concerns over his weight and even a rogue mole.

Becky then went one step further and publicly shamed the man by sharing the lewd exchange in which she feigned concern about his physical health and dished out a 'prescription'.

In the exchange, the man began debating about whether his mole was OK and said he'd had it checked by a doctor – but prankster Becky warned him the end of his manhood may "turn black and wither".

Her fake prescription – complete with a bogus NHS logo – ordered him not to send unsolicited explicit content to women again.

She then wished him a Merry Christmas and reported him to Twitter.

Becky, from Stratford-upon-Avon, Warwickshire, said: "I don't understand what it is about men where they feel they've got to display everything.

"I'm not entirely sure where it comes from. As your following gets bigger and people re-tweet things, I suppose you're exposed to more perverts.

"I suppose I would consider myself to be a woman of the world, I'm not easily shocked."

She continued: "So for me it was a case of opening it and laughing thinking 'what on earth is that'? The people who send these photos don't discriminate in terms of who it's going to, you could be 13 or you could be 80.

"I've had women in their 80s contact me and say they've had these pictures."

The particular man in question sent Becky a stream of extreme close-up pictures along with crude requests from Thursday until Sunday.

Explaining why she thinks men send such rude pictures and messages, Becky added: "I think it's for the shock factor.

"Then of course there are people who like the humiliation, they like to be told they're worthless."

Becky added: "There are strangely some who will send these pictures and then try and get to know you as a person, and to me that's even more peculiar. It's the wrong way round.

"[With] some men if you say something amusing back you get blocked right away, in which case I just delete them.

"Depending on what their own fetish is, depends on how they continue to react to you. Some of them don't understand where you're coming from at all.

"This guy didn't understand what was happening. I think he thought I was genuinely a doctor. It just amused me at the time.

"I think men know that it's unacceptable, they just need to be aware that not every woman is going to be a shrinking violet about it.

"If it's a case of them knowing it's wrong but they're going to do it anyway, they need to have a second think about it."

END_OF_DOCUMENT_TOKEN_TO_BE_REPLACED

END_OF_DOCUMENT_TOKEN_TO_BE_REPLACED
We and our partners use cookies on this site to improve our service, perform analytics, personalize advertising, measure advertising performance, and remember website preferences.Ok