Woman reveals she had an abortion due to severe pregnancy sickness 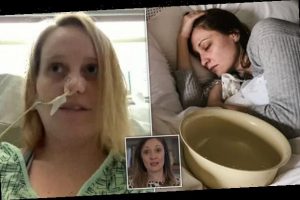 Woman reveals she had an abortion due to pregnancy illness hyperemesis gravidarum which affected Kate Middleton while others say it left them suicidal, unable to eat solids for 32 weeks and vomiting 100 times a day

A mother who suffered from extreme sickness during pregnancy admitted she considered taking her own life to escape the debilitating condition while another made the harrowing decision to have an abortion because she couldn’t cope in a shocking new documentary.

Sick: The Battle Against HG explores the ‘untold story’ of hyperemesis gravidarum, a chronic pregnancy complication characterised by severe nausea, vomiting and weight loss, which affected the Duchess of Cambridge while carrying all three of her children.

The Amazon Prime documentary is presented by Charlotte Howden, who suffered from HG during her pregnancy with son Henry and is urging the medical profession to take the condition more seriously.

She insisted she didn’t feel ‘validated’ by her GP and was refused medication to help with her nausea, despite feeling like she was ‘dying’. 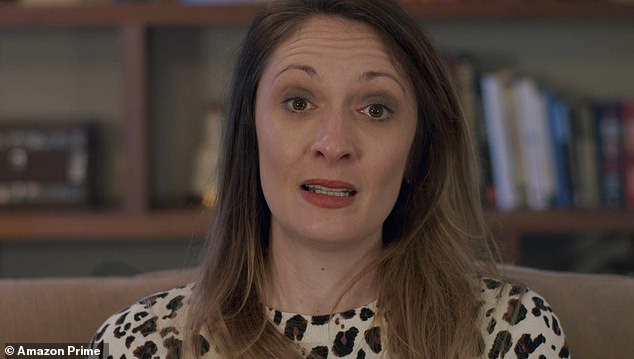 The Amazon Prime documentary is presented by Charlotte Howden, pictured, who suffered from HG during her pregnancy with son Henry and is determined to challenge the medical profession to take the condition more seriously 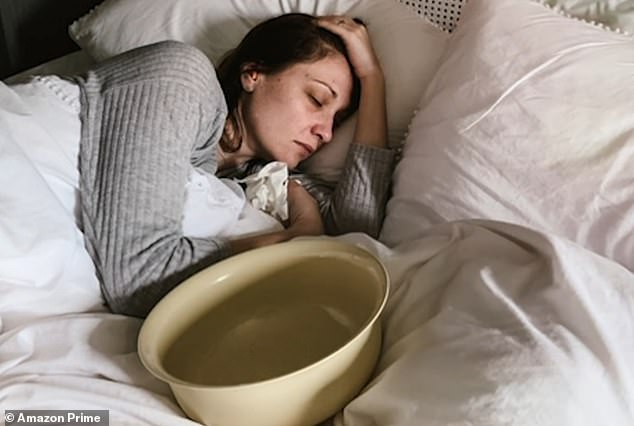 Charlotte insisted she wasn’t taken seriously by her GP and was refused medication to help with her nausea, despite feeling like she was ‘dying’.

Charlotte, from Southampton, admitted her ‘all-consuming’ HG ordeal – which kicked in when she was seven weeks and was ’24 hours a day, seven days a week’ for 20 weeks – drove her to consider taking her own life.

‘I would drink and I could count to 20 seconds and then I would be sick again… [I] would sit there in desperation and think I just want to die, and then the thoughts of abortion or termination would come into your head because… I’m only ill because I’m pregnant,’ she admitted.

Caitlin Dean, a registered general nurse from Cornwall who has dedicated her career to raising the profile of the condition, said around 10 per cent of HG pregnancies result in termination – equating to up to 1,500 a year. 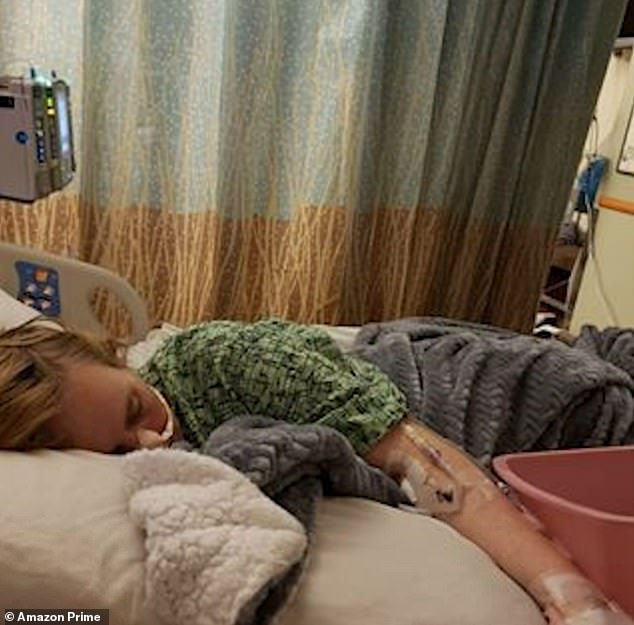 Mother-to-be Kirsten, from San Diego, pictured, has made the decision to have a hysterectomy after she gives birth to her second child, having battled severe HG with both pregnancies

Charlotte spoke to one woman, who wished to remain anonymous, who made the heartbreaking decision to abort her second baby when HG left her so weak she was unable to lift her body up to be sick.

‘I was housebound, I couldn’t go to work, couldn’t look after my child, even to go to doctors was a struggle,’ she told Charlotte.

‘To think that was going to be my life, potentially for nine months…. we thought, we’re not going to be able to do this – we wouldn’t put our family or relationship through this again.’

Mother-to-be Kirsten, from San Diago, has made the decision to have a hysterectomy after she gives birth to her second child, having battled severe HG with both pregnancies.

At 36 weeks gone she spoke to Charlotte via video call from her hospital bed, where she has been for the majority of her pregnancy. 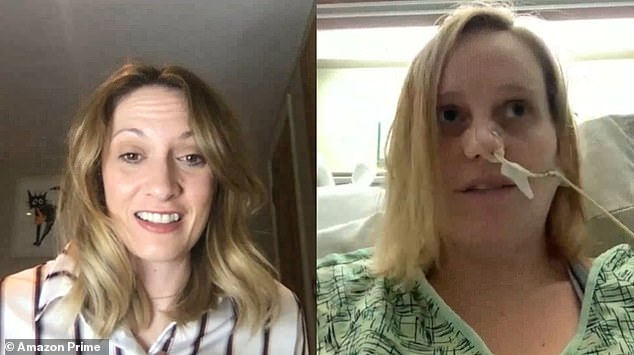 At 36 weeks gone Kirsten spoke to Charlotte via video call from her hospital bed, where she has been for the majority of her pregnancy

Kirsten revealed she hadn’t been able to keep solid food down for 32 weeks and had lost 52lbs, adding: ‘It’s pure hell, it’s basically someone’s worst nightmare happening. It makes somebody who is the strongest person in the world weak at the knees.

Speaking about ‘having her tubes tied’ Kirsten said: ‘My fiance and I just made the decision because we are afraid that the next time would actually kill me… we’d rather not take the risk.’

Charlotte also met with mother-to-be Rachel, who had HG with her first child and is now five weeks pregnant with her second – and is bedbound once again.

Rachel said no one believes or can comprehend the extremity of the condition unless they’ve been through it, leading her to feel she was ‘bad’ at being pregnant. 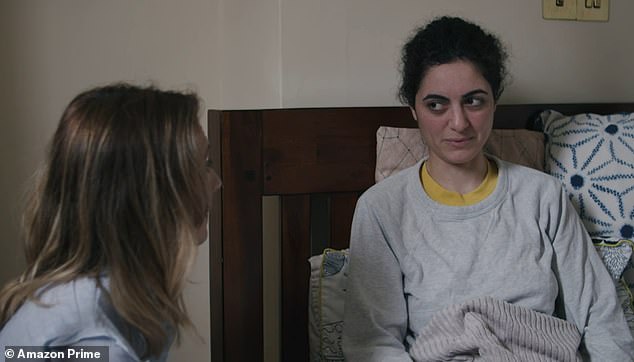 Charlotte also met with mother-to-be Rachel, who had HG with her first child and is now five weeks pregnant with her second – and is bedbound once again

Breaking down in tears, she described her first pregnancy as a ‘lonely and dark time’ where she felt ‘super isolated’ and constantly feared she was failing as a mother before she even gave birth.

During the programme Charlotte received a response to a letter she’d written to the Royal College of GPs which put forward testimonies from HG sufferers she’d spoken to who claimed they were turned away by their doctors.

Experts estimate the drug led to the death of approximately 2,000 children and serious birth defects in more than 10,000 children – about 5,000 of them in West Germany – before it was taken off the market in November 1961.

‘I don’t know if that fear will ever go away, I really hope it will because as a sufferer I see the other side, and without medication, without the knowledge, experience and conviction of my own physician prescribing for me, I don’t think I would cope,’ Dr Ostrowski told Charlotte. 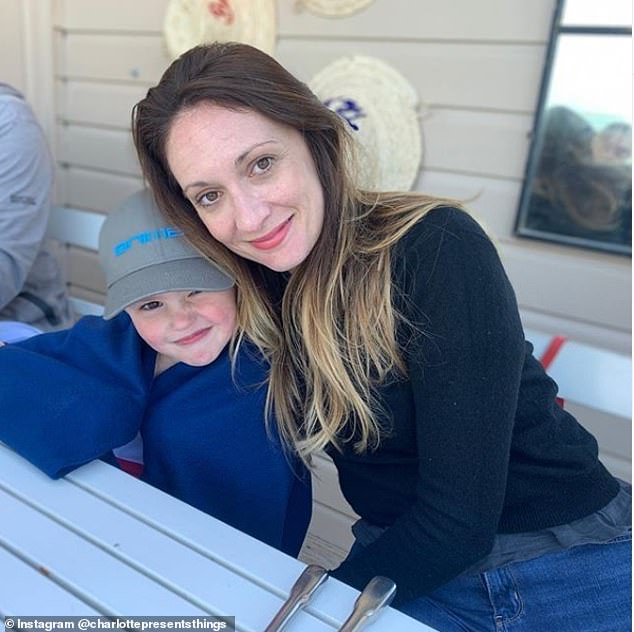 Charlotte, pictured with her son Henry, has made the difficult decision not to have any more children because of her struggles with HG

But there is hope for HG sufferers. New research suggests HG could be caused by genetic variations. Dr Marlena Fejzo, an associate researcher at UCLA and USC in California, has identified two genes associated with the condition – GDF15 – a hormone that increases rapidly during early pregnancy that goes to the brain and causes changes in metabolism – and IGFBP7.

Professor Sir Stephen O’Rahilly, a professor of clinical biochemistry and medicine at Cambridge University, also found a significant link between GDF15 and HG.

Dr Marlena explained: ‘One of the fascinating things about the hormone GDF15 linked to HG was that it also causes cancer cachexia – a wasting syndrome which kills about 20 per cent of cancer patients.

‘They die because their cancer is producing too much GDF15 and it causes this appetite loss, very similar to HG, and muscle wasting, and they just end up dying.

‘Patients dying from cachexia, they have one nanogram per mil of blood higher levels of GDF15 in their blood compared to cancer patients that don’t have cachexia, that are able to eat normally.

‘What we found in our small group of women who were hospitalised with HG was that they have five nanograms per mil on average higher levels of GDF15 than patients with normal nausea and vomiting in pregnancy.

Professor O’Rahilly said: ‘I think now for the first time we have a rational target to go after in HG. GDF15 may not provide all the answers but it’s a very exciting possibility.’

Sick: The Battle Against HG is available to watch on Amazon Prime.

WHAT IS HYPEREMESIS GRAVIDARUM?

Hyperemesis gravidarum (HG) is defined as severe nausea and vomiting during pregnancy.

Celebrities who’ve been open about their own battles with HG include:

It affects up to two percent of pregnant women.

HG symptoms usually appear between weeks four and six and peak at 9-to-13 weeks.

Up to 20 per cent of sufferers experience symptoms up to weeks 14-to-20, however, most have relief in the later stages.

Unlike morning sickness, which affects up to 80 percent of pregnant women, HG causes severe dehydration and prevents sufferers from keeping any food down.

Some HG cases require hospitalization where women can receive IV fluids and nutrition.

HG’s cause was thought to be hormonal, however, research suggests it may be due to genetic variations.

END_OF_DOCUMENT_TOKEN_TO_BE_REPLACED

END_OF_DOCUMENT_TOKEN_TO_BE_REPLACED
We and our partners use cookies on this site to improve our service, perform analytics, personalize advertising, measure advertising performance, and remember website preferences.Ok