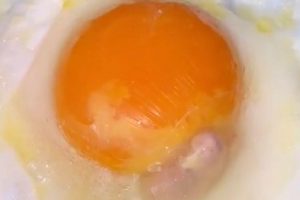 A woman was shocked when he tried to fry an egg and find a tiny chicken foetus next to the yolk.

New Zealand TikTok user @its_mxdison_ said she was "officially put off eggs" and is now considering going vegan after the horrifying discovery.

In a video she posted, with 2.4 million views, she cracks an egg and drops it into the frying pan.

As she zooms in, it becomes clear that a pinkish blob appears to be the chicken foetus with a head and a body.

Her video attracted nearly 7,000 comments as viewers told her she just cooked a fertilised egg. It appeared that she is not the only one who was put off by the surprise, one viewer said: "Ew I don't want eggs no more."

Another revealed: "That's an unborn chicken."

A fourth asked: "Where do you get your eggs from? Fertilised eggs are extremely rare to come by if the egg is bought commercially.

"Got it from a farmers market?"

The 28-year-old replied: "We got given them from a farm. It's free-range eggs. "It really was traumatising! I've always had free-range eggs and this is the first!"

In the next video, she gave updates on how she handled the partially cooked egg.

The woman decided to bury it in a garden.

Meanwhile, in the UK, a woman bought a pack of eggs at Morrisons supermarket and managed to hatch a duckling from it.

Adele Philips, from Wales, ordered an incubator online and watched videos to learn about hatching ducklings.

In just four weeks' time, one of the six duck eggs was successfully hatched into a little yellow duckling and she decided to keep it as a pet.