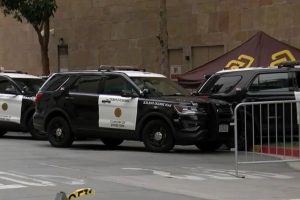 Seconds earlier, she had a close call when she lost her balance — and then climbed up again.

A witness has described what allegedly happened to the mother and son who fell to their deaths at Petco Park on Saturday.

The 40-year-old woman and two-year-old boy died after plummeting from a third story upper concourse on Saturday afternoon, right before the Padres were due to play. Police said the deaths appeared suspicious; San Diego Police Homicide Unit are investigating whether or not they were intentional.

6-Year-Old Killed on Haunted Mine Drop Was Sitting on Top of Both Seatbelts, New Employees Bypassed Warning System: Report

But one witness, who did not want to be identified, told NBC that the mother appeared happy and was laughing before the fall — and that she’d had a very close call just seconds beforehand.

The witness said the mother had been jumping up on the benches of picnic tables near the railings with her son in her arms. After watching her fall off the bench a first time, the witness said she was shocked to see her do it again.

“The man that was with her was standing by the railing as the woman started jumping on the bench of the table closest to the railing, holding the baby in her arms,” the witness said. “She seemed happy — laughing.”

“She lost her balance and fell off the bench,” she added. “I remarked to my son, ‘Oh my gosh she almost fell.'”

“About 30 seconds or a minute later, she jumped back up and did it again, facing the man as she jumped with the baby,” the witness recalled. “I remember saying, ‘I can’t believe she’s doing that again,’ and then she was gone … From my vantage point, looking at her back, it was almost like she rolled over the railing. I told my son, ‘Oh my gosh she went over!'”

“There were no screams: It was just eerily quiet. Unfortunately, we heard the sound when they hit the ground,” she added.

First responders quickly arrived on the scene, but there was nothing they could do for the two victims; they both died before reaching the hospital.

The witness gave her account to police, who are still investigating the incident. The victims, who are San Diego residents, have not been identified. The woman’s partner — the child’s father — is believed to have been with them at the stadium at the time.

The game went ahead as planned on Saturday, with most people reportedly unaware of the tragedy that had just occurred.

“We are deeply saddened by the loss of life at Petco Park last evening,” the Padres said in a statement the following day. “Our thoughts and prayers are with the family of those involved.”

“We will continue to refrain from comment on the nature of the incident as it is an ongoing investigation by the San Diego Police Department.”