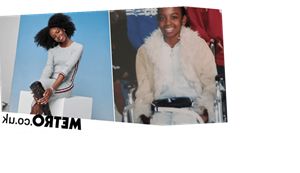 A woman who lost one of her legs as a child after being hit by a drunk driver has become a successful model. Kiara Marshall, 27, has campaigns for Tommy Hilfiger and Teen Vogue under her belt, and now wants to inspire other people with disabilities to pursue their dreams.

Kiara, from Brooklyn in New York, lost her right leg on Independence Day 2003 while celebrating with her family. The youngster – then aged 10 – was struck by a driver who was four times over the drink drive limit. Doctors were able to save the badly injured child’s life, but had to amputate her right leg in order to do so.

Kiara got her first prosthetic leg the following year, and soon came to terms with her disability. She now proudly shows her artificial limb in modeling shoots, and hopes her work will help other amputees realize that there is life after losing a limb.

She said: ‘I had never seen an amputee before when I got my prosthetic leg, I felt very alone and had no one to look up to. As I grew up I decided I wanted to change how many people like me there are in the media, so that kids like me have someone to look up to.

‘If there are other little girls out there with limb differences then I want to be their representation. To be doing what I am now feels incredible and like I am living beyond my wildest dreams.

‘I have always dreamed of being a model but it never seemed like a viable option to do it full time, so it feels very surreal. The accident lit a fire inside me to pursue a career in modeling and in many ways it was the making of me.

‘I’ve been full time for a couple of years now and I’ve done some great shoots. I’ve done swimwear for Target, Tommy Hilfiger twice and I appeared at New York’s Fashion Week for Teen Vogue.’

Kiara was living in Austin, Texas, at the time of her accident – which happened while she was outside watching a July 4 fireworks display. She was life-flighted by helicopter to a hospital in Temple, Texas, and spent 11 days in intensive care recovering from the accident. The lower part of Kiara’s right leg had been severed by the impact of the car. Although the upper half remained intact, Kiara said doctors were unable to save it and had to perform a full amputation.

Recalling the life-changing accident, Kiara said: ‘I was sat on the hood of our car watching the fireworks and all of a sudden I saw headlights coming towards me. I was pinned in between the two and my right leg was basically chopped off.

‘I remember being in and out of consciousness and seeing the firefighters surrounding me. It was terrifying and it has changed my life completely.

‘When I look back now I realize how resilient I was, but I remember feeling very alone, I was the only person I knew who had an amputation and there was no one like me in the media.

‘I only really got interested in modeling after the accident. I liked the idea of being able to express myself with my body.’

Kiara began modeling for fun aged 18, and initially worked for free to build her portfolio.

She landed her big break in 2018 after moving to fashion capital New York and being signed to We Speak – a body positive agency which aims to boost representation of BAME models, as well as those who are disabled or plus-sized.

Kiara – who is married to carpenter Jean Barberis, 41, saw her professional modeling career took off after being signed to We Speak and now does the job full time. She also works as a brand ambassador for design company Alleles, which makes stylish covers for prosthetic limbs.

Explaining the hard slog that has now paid off, Kiara said: ‘Up to the age of 24 I did shoots for free with aspiring photographers and didn’t have to pay anything, so it worked for both parties. Now I work for this inclusive agency and specialize in print fashion modeling.

‘The swimwear one I did for Target was extremely revealing and showed everything and all of my scars, I found it mind blowing that they asked me to do it and it felt great to take part.

‘My main aim is to be a role model, to show other people like me that they can be whoever they want or do whatever they want to do in life.

‘I don’t feel like people in my community get the equality they deserve and I think there’s still a lot of work to be done there.

‘I love what I do and I’d love it if I could help to make a difference.’

Do you have a feel-good news story to share?

If you have overcome adversity to achieve something great or perhaps experienced something amazing, then we’d love to hear from you.