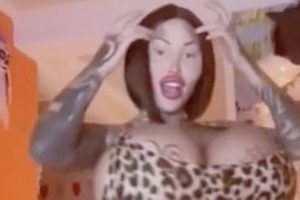 A plastic surgeon reacted to Mary Magdalene – an Instagram star who claims to have the "world's fattest vagina".

The All About Plastic Surgery account shared a clip of the model, who has huge fake boobs and bum implants.

She warned viewers that some of the surgical procedures have to be done abroad because they are so extreme they are against regulations.

But TikTok users were mostly shocked when they found out they don't usually make implants that large.

They have to be custom ordered or have multiple implants piled on top of each other to achieve the XL curves.

In the video, which has gained more than 905,000 likes, the surgeon from @plastic.touch theorised: "Let's talk about extreme plastic surgery.

"If you look at the size of her implants, they are much larger than the ones allowed in the US meaning she got them custom-made in a foreign country, or she has a couple of implants stacked.

"Now, this buttock augmentation was probably done with silicone implants in combination with fat transfer."

The video was also posted with a stark warning about the safety of extreme procedures.

The caption reads: "Some people like the extreme look, but what comes to our mind is safety first."

TikTok users took to the comments shocked by the lengths people will go to for an extreme change as they are worried about the other aspects of their lives that could be affected.

One user asked: "How does she sleep?"

Another added: "That would make my back hurt."

A third wrote: "I thought they were balloons."

A fourth commented: "It just doesn't look it would be easy to sleep or sit comfortably."

To stay up to date with all the latest news, make sure you sign up for one of our newsletters here.

The news comes after a woman who calls herself a ‘bimbo’ has revealed what she looked like before spending thousands on plastic surgery.

Alicia Amira from Stockholm, Sweden, began her transformation after quitting her PR job when she was 25.