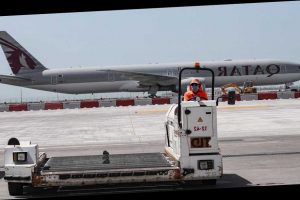 A group of female passengers on a plane headed from Qatar to Australia say they were humiliatingly violated by authorities who conducted “incredibly invasive” strip searches and medical exams after a newborn baby was found in a terminal bathroom.

The incident occurred on Oct. 2 at Hamad International Airport in Doha, Qatar, apparently as an attempt by airport staffers to determine who had given birth to and abandoned the child, Australia’s 7 News reported.

A group of women, including 13 Australians, were reportedly removed from their Qatar Airways flights on the tarmac, detained and forced to undergo an inspection in an awaiting ambulance.

“This is a grossly, grossly disturbing, offensive, concerning set of events,” Australia’s Minister for Foreign Affairs Marise Payne said at a press conference on Monday. “It is not something I have ever heard of occurring in my life, in any context. We have made our views very clear to the Qatari authorities on this matter.”

One of the victims, a 31-year-old nurse from Australia named Jessica, told The New York Times that she and her fellow female passengers were split into groups of four and shuffled into two ambulances on the tarmac.

There, she said, she was told to lie down on a table and remove her underwear, despite the fact that she was next to a window with no blinds and more than a dozen men were standing outside.

“I was scared,” Jessica said. “We were all like, ‘Can someone please tell us what is happening?’ All [the female examiner] said was, ‘A baby has been found in a bin, and we need to test you.’”

Jessica told the Times that the process was “incredibly invasive,” and that several older women in the other ambulance had their bellies pressed.

“I was freaking out,” she said. “I still didn’t know what was happening. I remember lying there, I think I was in shock but I was thinking, ‘This isn’t right. This isn’t how this should be done.’… There was no choice in any of it.”

Passenger Wolfgang Babeck told the Times that when the women returned to the plane, they appeared “shellshocked,” and several were in tears.

“I personally found this disturbing,” he said.

Australia’s Department of Foreign Affairs and Trade (DFAT) has formally complained to authorities in Qatar, according to 7 News, which was the first to report the incident this weekend.

“The Australian Government is aware of concerning reports regarding the treatment of female passengers, including Australian citizens, at Doha (Hamad) airport in Qatar,” DFAT said in a statement to the outlet. “We have formally registered our serious concerns regarding the incident with Qatari authorities and have been assured that detailed and transparent information on the event will be provided soon.”

Meanwhile, a spokesperson for the airport, which did not immediately return PEOPLE’s request for comment, told the Times that the abandoned newborn has not yet been identified, but is being cared for.

“Medical professionals expressed concern to officials about the health and welfare of a mother who had just given birth and requested she be located prior to departing H.I.A.,” the spokesperson said. “Individuals who had access to the specific area of the airport where the newborn infant was found were asked to assist in the query.”

Qatar Airways did not immediately return PEOPLE's request for comment.

At the press conference, Payne said that Australia is taking the incident “extremely seriously,” and that next steps will be determined once Qatari authorities make available an incident report.

She said that the Australian citizens involved were in a quarantine period upon returning, and have “been provided with appropriate support through the health process during the period,” including mental health support.

The matter has been referred to the Australian Federal Police, Payne said.

END_OF_DOCUMENT_TOKEN_TO_BE_REPLACED

END_OF_DOCUMENT_TOKEN_TO_BE_REPLACED
We and our partners use cookies on this site to improve our service, perform analytics, personalize advertising, measure advertising performance, and remember website preferences.Ok