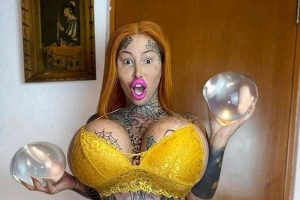 A self-confessed surgery "fanatic" has spent £80,000 on a variety of extreme procedures to drastically change her appearance.

But Mary Magdalene is totally unrecognisable in pictures taken years ago, before her 'human Barbie' transformation.

And her fans have been left gobsmacked by the images, saying they're "totally loving" them.

Mary, 30, shot to global infamy when she underwent a controversial operation to give her what she described as a "world's fattest vagina". She went viral, with her comments catching people's attention.

She had her first procedure at 21 and is reported to have had three boob jobs, three Brazilian butt lifts, cheek fat removal, hip fillers, 20 dental veneers and several lip fillers to achieve her 'Barbie' look.

In addition, the former stripper and escort, who is now a tattooed OnlyFans model, is said to have had chin lipo, cat eye surgery, eyebrow implants and several nose jobs.

Mary, from Mexico, has 5000cc boob implants that weigh around 10kg (22lbs) – one and a half times heavier than a bowling ball.

They also feature expanders, enabling her to fill them with saline through a needle and port.

Her surgery obsession has caused her a raft of health problems.

She travelled to Colombia to get budget bottom implants and had illegal silicone injections, which went rotten and almost killed her.

The extreme surgery to increase the size of her vagina also almost claimed her life.

It involved the transfer of fat from other parts of her body to her vagina via injections. One side of her vagina kept growing, leading to a lot of pain and complications.

She told the Sun: "I almost died during [the] procedure. I had to get two blood transfusions. The doctor said I was losing so much blood, and turning very pale. He thought I was going to die."

Earlier this month, she revealed that she was struggling to walk owing the pain caused by her huge boobs and bum, and that she needed a mobility scooter.

“My boobs are so heavy I want to buy a mobility scooter," she told her many Instagram followers.

"I am in pain when I walk. But I think people will think I'm trying to get attention and being insensitive.

"At the airport I never request a wheelchair and I get in so much pain having to walk such long distances.

"My boobs and a** are so heavy that I no longer have ankles because my legs are always swollen.”

Mary's name is taken from the Bible. In the religious text, Jesus is believed to have said of Mary Magdalene when she was facing being stoned: "He that is without sin among you, let him first cast a stone at her."

And this could quite easily apply to the surgery addict who has faced criticism from those who have been been quick to judge following her extreme transformation.

But only a few years ago, she was a natural beauty with flawless skin and just a few tattoos.

She flaunted her natural curves and athletic figures in selfies and shared the throwback pics on Instagram.

Fans were left stunned after seeing how much she has changed over the years, with one person commenting: "Its so hard to believe that's you! I'm totally loving these old pics."

Despite her health issues, Mary has insisted that she's happy with her look.

She has previously revealed that she had a difficult childhood, turning to sex and drugs at an early age to escape the confines of her religious family.

"I was doing lines of cocaine. I was going to school drunk, this and that, in grade seven and eight."

Mary now earns money through her Onlyfans account and also paints and sells portraits of herself online.