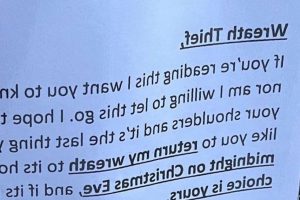 A resident took matters into their own hands after someone 'stole' their wreath from their front door – and people have compared it to action film Taken.

Despite Christmas being the most 'wonderful' time of the year, not everyone shares the same cheery values.

With scrooges a plenty and wreath thieves in their midst, the Brit decided to deal with their missing door decoration with their own very particular set of skills…

READ MORE: Mum-of-nine spends thousands on kids each Xmas – including £250 on dinner alone

No contacting the police for this wreath-less homeowner – as they decided to write a very passive aggressive verbal warning.

Taking inspiration from Liam Neeson's character in the first film, the printed out note reads: "Wreath thief, if you're reading this I want you to know I have not forgotten, nor am I willing to let this go.

"I hope the guilt weighs heavy on your shoulders and it's the last thing you think about at night.

"I'd like you to return my wreath to its hook on my front door by midnight on Christmas Eve, and if its not I will find you.

"The choice is yours."

They then signed it off with a "regards" and house number 26.

Since being stuck to the front door with duct tape, a picture of the note made its way onto Twitter, where people have praised the angry resident.

Another user added: "I have a very particular set of skills…"

While a third mocked: "So the person who nicked the wreath is going to come back and read this note?"

Someone else praised: "Priceless."