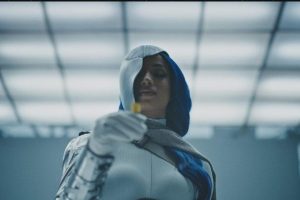 The segment features Banks as a futuristic superhero who sparks the start of the college football national championship using the final piece of confetti from last year’s game in Miami to the teams running out on the field this year in Indianapolis. The game, which begins at 8 p.m. ET tonight, will see Georgia square off against Alabama. It will air on ESPN and stream live on the ESPN app.

“It’s been such an honor, I feel like everybody who has been working on the set, and the whole team have been so incredible… to walk in and to just feel so welcome, and just to see everything, and I was just like, it was amazing,” Banks said. “I love the outfit, I love the concept, and it just fit me so well.”

This is the latest collaboration between ESPN and WWE. The sports network and sports entertainment giant previously collaborated when WWE star Big E voiced the introductions for ESPN’s promo for the Tyson Fury vs. Deontay Wilder fight back in October. Elsewhere, Goldberg joined College GameDay as the celebrity guest picker for the Georgia-Michigan game on Dec. 31.

For Banks, stepping into a futuristic super-powered role is nothing new. She previously appeared in Season 2 of the smash hit Disney Plus series “The Mandalorian” in the role of Koska Reeves.