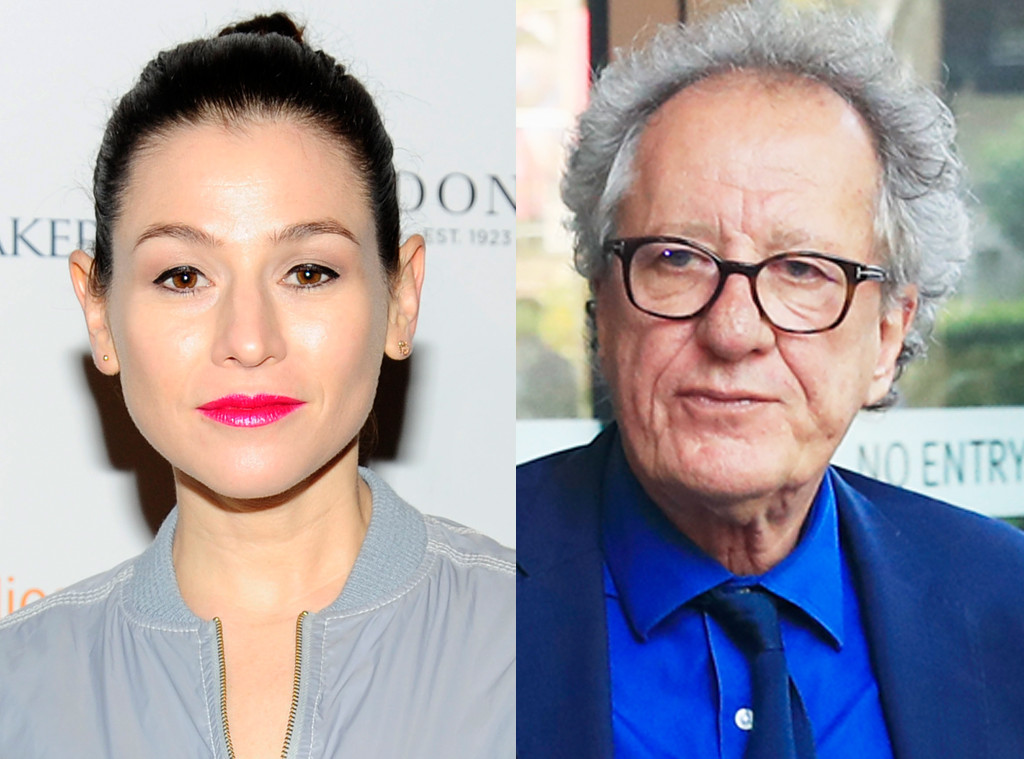 Yael Stone has accused Geoffrey Rush of past sexual misconduct.

In an article published by The New York Times on Monday, the Australian actress alleged the Oscar winner displayed inappropriate behavior during the time of their 2010-2011 productionThe Diary of a Madman.

Rush called her allegations “incorrect” and said “in some instances” they were “taken completely out of context.”

“However, clearly Yael has been upset on occasion by the spirited enthusiasm I generally bring to my work,” he wrote in part of his statement to the newspaper. “This, most certainly, has never been my intention.”

He also claimed, “I abhor any behavior that might be considered as harassment or intimidation to anyone—whether in the workplace or any other environment.”

Stone was 25 years old at the time of the alleged misconduct; Rush was 59. In the article, she claimed the inappropriate behavior started with text messages. While the article’s writer, Bari Weiss, claimed she was shown “a number” of the messages, she also claimed she was asked not to quote them because Stone feels she “enthusiastically and willingly” responded.

“I was so flattered that someone like that would spend their time texting me into the very early hours of the morning,” the Orange Is the New Black star said. “Gradually the text messages became more sexual in nature, but always encased in this very highfalutin intellectual language.”

Stone later added she was “embarrassed by the ways I participated.”

“I certainly wouldn’t engage as the person I am now in the way I did when I was 25,” she said.

However, she claimed the alleged misconduct soon evolved into something more, including “stranger intimacies” in the dressing room. For instance, she claimed Rush would ask her to take out his contact lenses or his sweaty costume during intermission. She also claimed he would uninvitedly join her for naps in the tight space underneath their makeup desks in between afternoon and evening performances.

Furthermore, she accused him of holding a mirror above her shower in the shared dressing room.

“I remember I looked up to see there was a small shaving mirror over the top of the partition between the showers and he was using it to look down at my naked body,” she told The New York Times. “I believe that it was meant with a playful intention, but the effect was that I felt there was nowhere for me to feel safe and unobserved.”

While she claimed she told the actor to “bugger off,” she also felt the need to be cautious with her response.

“I was walking a very delicate line where I needed to manage these uncomfortable moments but never, never offend him,” she said. “There was no part of my brain considering speaking to anyone in any official capacity. This was a huge star. What were they going to do? Fire Geoffrey and keep me?”

She told the newspaper she felt the same feeling after Rush allegedly danced before her in a “playful, clownish manner” while he was “totally naked.” Stone, who claimed she was removing her makeup at the time, said she responded with “an attitude of ‘Oh, you’re a very naughty boy.'”

“I didn’t want him to think I was no fun, that I was one of those people who couldn’t take a joke,” she claimed.

However, the accusations didn’t end there. She also claimed Rush touched her back “in a very sensual manner” that was “unwanted and sustained” at an award show. Actually, she claimed he apologized for the alleged action the next day and referred to it as “uncalled-for but had to.”

In addition, she claimed her anxiety level became “very high” and that she told a man she was dating at the time she was afraid to go out with Rush after a performance because “I was nervous about what was expected of me.”

Weiss wrote unnamed family members and friends of Stone recounted details from her accusations and that three people who worked on the production confirmed aspects of the allegations. Weiss also cited entries from Stone’s personal diary that seemed to support the claims.

Stone isn’t the first person to accuse Rush of misconduct. In 2017, The Daily Telegraph published allegations of inappropriate behavior brought forth by a woman later identified as Eryn Jean Norvill, who acted alongside him in the Sydney Theater Company’s 2015 to 2016 production of King Lear.

Not only did Rush deny the allegations—calling them “false, pejorative and demeaning”—but he also sued the publisher, Rupert Murdoch’s Nationwide News. According to The New York Times, the articles were removed from the website.

That year, Stone allegedly wrote an email to Rush about how he made her feel at the time of their production.

“I’m sure that this moment is extremely challenging and my thoughts these last few weeks have come to you many times. I hope you are OK,” she allegedly wrote, per the email published by The New York Times. “I worry about you, about Jane and the kids.”

She later allegedly added, “In the name of years of friendship I wanted to share with you what I have always been afraid to say. I hope it’s possible for you to receive this in the spirit that it is meant. With a view toward healing.”

While she said Rush never wrote back, she claimed an apology “may have transformed both of our lives for the better.”

“I also understand it might be confusing and look strange that I maintained a friendship with someone for so long who treated me in a way that made me feel uncomfortable,” she told The New York Times at one point. “But there is the reality of professional influence and the reality of a complicated friendship, which ultimately was corroded by a sexual dynamic. But it was still a friendship.”

She also suggested that possible defamation lawsuits left her fearful to speak out; however, she now considers it “a matter of significance to the public.”