Yewande Biala asks: when will the show become truly inclusive? 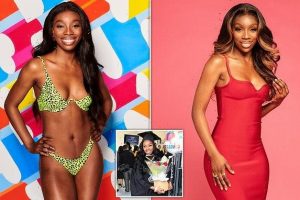 The other side of the reality TV idyll… by a former star: As yet again a black female contestant is the last to be picked by the men, former islander turned author Yewande Biala asks: when will the show become truly inclusive?

Like its legions of devoted fans, Yewande Biala has been anticipating the return of Love Island, with its irresistible mix of romantic intrigue, bitching and buff bodies.

Yet Yewande, 25, is watching closer than most, especially interested in what the contestants will look like this year. The reason? In 2019 she was one of the few non-white women and the only dark-skinned black woman in the starting line-up, and some fans claimed that she was immediately at a disadvantage.

On social media, viewers condemned the lack of airtime she was given, in comparison to some of the other contestants, and there were suggestions she was the ‘token’ black girl. Over several series, fans have observed that non-white contestants seem to do less well than their white rivals.

This year, however, we were told the line-up would be the ‘most inclusive’ ever, suggesting the programme makers had taken on board previous criticisms.

Yet of the six starting female contestants, there are two of Asian heritage and just one black woman, fashion blogger Kaz Kamwi, compared to three blonde white women. 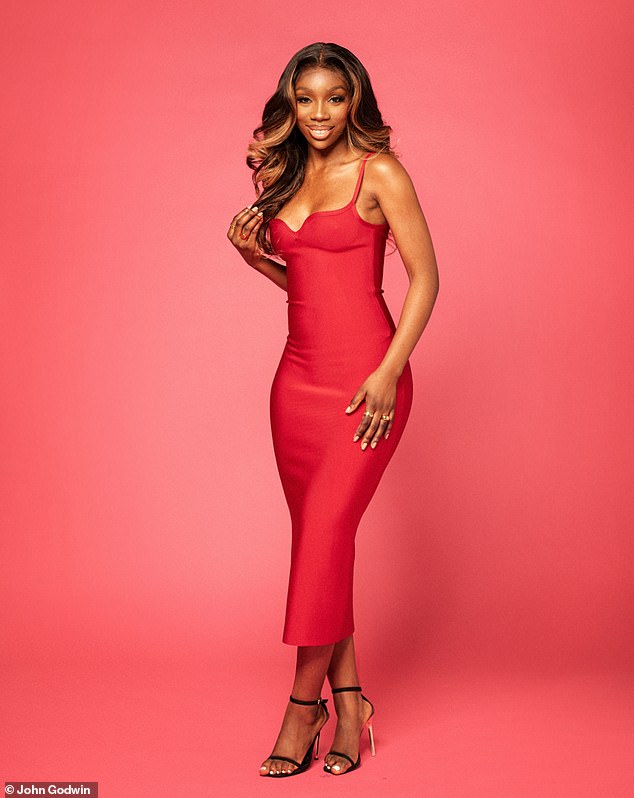 Yewande Biala, 25, (pictured) was the only dark-skinned black woman in the starting line-up of Love Island in 2019

‘To be honest, I’m disappointed,’ Yewande says, when we speak ahead of the launch episode. ‘I’m not talking just about lack of diversity in different ethnic backgrounds, but also in sexual orientation and different body types. Where are the plus sized women? Where is the representation of those from the LGBTQ+ community? Variation in size and shape would be nice. I thought we might have a plus size woman. Don’t all these people deserve to find love, too?’

As new contestants arrive when existing ones are voted off by viewers it’s impossible yet to know what the overall make up of the participants will be.

However, Yewande is not hopeful. ‘I reckon this year will be no different,’ she says. ‘I was stunned, but not surprised, when the men were asked about their ideal “type” and some of them said “blonde, blue-eyed” or “blonde, petite”. How predictable can you get? What I’d love is to see men come on and say they don’t have a type, or they are open to different types of beauty.’

It seems her fears have been realised. In Monday night’s opening episode, Kaz was the last girl to be picked (with three boys choosing to pick blonde-haired, blue-eyed Faye Winter ahead of her). It makes her the fourth black female contestant in as many years to suffer the same fate, leading to criticism from viewers. Following the episode, Yewande tweeted: ‘Rooting for Kaz Kamwi so much! It’s literally the ghetto in there!’

Given her own experience, it’s not surprising that Yewande is concerned for contestants of colour. Did she feel she’d been picked as a ‘token’ black woman?

‘Not necessarily at the time, but afterwards, yes. I think you always do. It’s not just Love Island, it’s every TV show ever. You’ve got to remember, I grew up in Ireland, I never saw a black woman on TV. I never even had a black teacher. That makes you very conscious and hyperaware of things.’

Yet perhaps Yewande will have the last laugh, because in the race to stay relevant beyond the brief TV glory, unlike most contestants she has struck lucky.

She recently signed a book deal. Next year she will publish Reclaiming, a collection of writings about dating, growing up and ‘maintaining your identity in a world which would rather see you change’. She says the book will be a ‘love letter for anyone who has ever felt out of place’.

Yewande’s family moved from Nigeria to Dublin when she was three. The only black girl in her primary school class, she experienced racism of all sorts, from the overt (‘walking down the street and having someone say “go back to your country”’) to the trickier-to-call-out type. 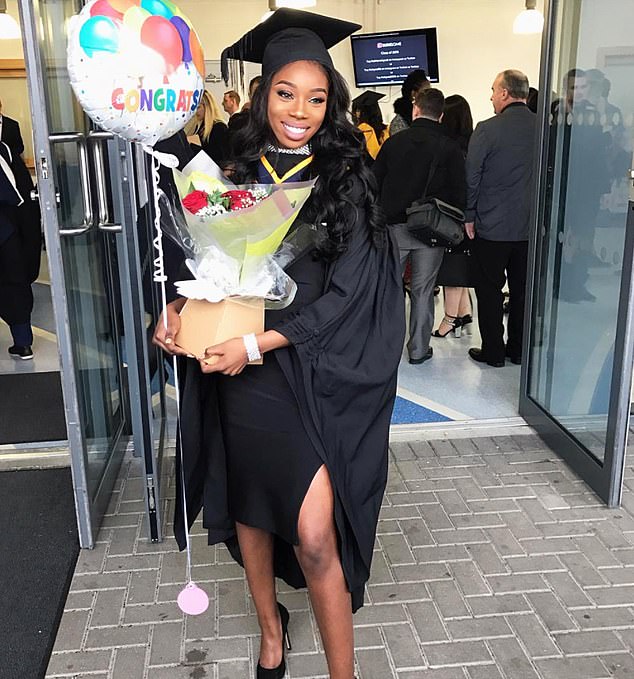 Yewande, who is a scientist with a first class honours degree and a masters in pharmaceuticals, has previously worked for Pfizer and Bristol Myers Squibb. Pictured: Graduating

At school, her Nigerian name (it means ‘mother returning’) was a curiosity, and a problem. When teachers discovered her middle name was Elizabeth, it was suggested she call herself that instead of Yewande. She politely declined, and has been politely declining ever since, but she is tired of being polite.

Yewande always was a striking addition to the Love Island line-up. A scientist with a first class honours degree and a masters in pharmaceuticals, she had what sounds like a stellar job before she gave it up to become a contestant.

She has previously worked for Pfizer and her most recent position was at Bristol Myers Squibb, where she worked on the development of cancer drugs.

It’s quite a departure that she now makes her living as a social media influencer, spending her days posting pictures of herself promoting everything from skin cream, underwear and takeaway delivery companies.

It’s left her parents (her dad is a tram driver; her mum a social worker) rather bemused. ‘My dad keeps saying “what is an influencer? How can you make money? When are you going back to your proper job?”. He just doesn’t understand how social media works.’

She insists she entered the Love Island villa always planning to return to the day job after her adventure. ‘I’d told my boss “do not give my job away”.’

So why did she apply? ‘I was actually thinking of retraining as a doctor, and was studying to sit my entry exams.’ Around the same time, she saw an advert for Love Island. She decided if she was accepted for medical training, she would do it. If not, Love Island beckoned. ‘And I didn’t get the med course. I missed it by two points.’ 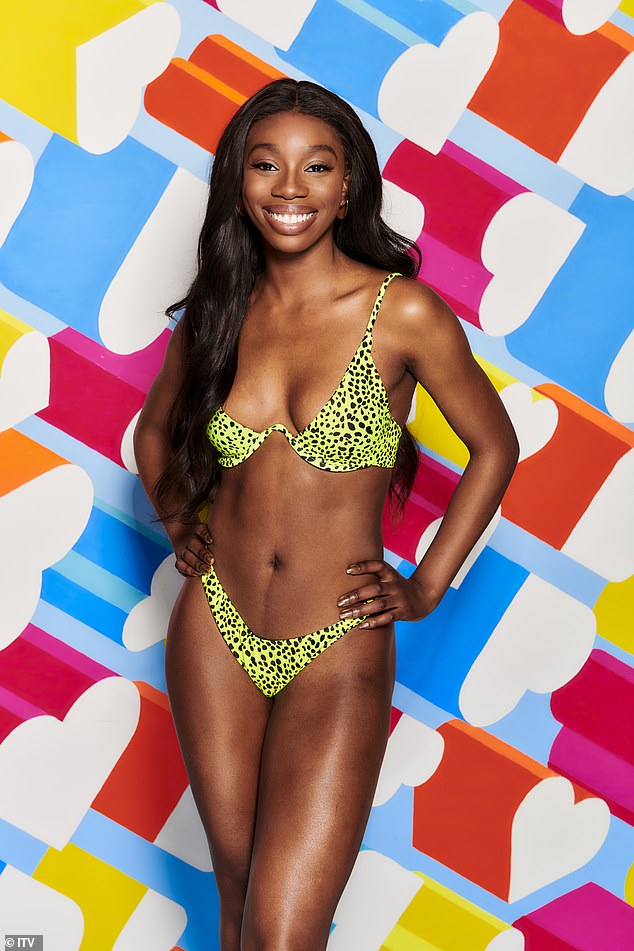 She left the villa sooner than she would have liked, and admits being ‘a bit bruised by that, because rejection is never nice’. She wishes she had allowed herself to enjoy her experience more, but felt ‘trapped’ at the time.

It opened the door to an entirely new life, though. Two years on, Yewande has still not been back in a laboratory, though she tells me that her previous employers have tried to tempt her back.

In December 2019 — after her Love Island stint but before the pandemic — she was offered a job, with an £80,000 salary, working in vaccines.

‘It just wasn’t the time to go back,’ she says. ‘It’s a huge commitment and a very serious role, one I just wasn’t ready for yet. When I do go back, I want to be 100 per cent committed.’

But why on earth would you give up a career like Yewande’s to pose in your pants on Instagram? And at the moment, when the world is crying out for clever souls who are trained in vaccine development!

‘Yes I DO feel guilty about that,’ she admits. ‘But would I be talking to you if I’d gone back to my job, or if I hadn’t gone on Love Island in the first place? Would I have a book deal? No. I have a profile now, and it’s up to me to use it. And I would like to go back to pharmaceuticals one day.

I thought about it at the start of the pandemic, but the problem is that I would need to retrain — the regulations are very strict about you being up-to-date — so it wouldn’t be possible to be involved in the Covid vaccine development anyway.’

It’s clear Yewande comes from a family where academic success is celebrated. Her mother has a masters degree, and she has a younger brother and sister studying software engineering and nursing respectively at university. Her youngest sister wants to study medicine. She did, anyway.

‘She has always wanted to be a doctor, but funnily enough she said the other day that she was thinking that she wouldn’t go to uni after all. She would just go on telly, and become a reality TV star, because that’s what I’ve done.’

‘I’ve told her she can do whatever makes her happy, I’ll always support her, but she needs to think things through. The thing about me is that I have my degrees. I had done my training. I can go back to my job. I am trying to encourage her to go to university. I’d tell anyone that.

‘It’s a myth that it’s easy to become a millionaire as an influencer. Some do, but most don’t.’

Reclaiming is available to pre-order now on Amazon.