Well, here’s something I never thought I’d see: These edible holidays candles from Smith & Sinclair are meant to be poured into your hot chocolate once you’ve burned them. I’m both fascinated and a little bit concerned; somehow I just can’t get over the cognitive dissonance I experience every time I look at that photo of someone literally tipping a burning candle into a mug of hot chocolate. Then again, though, the “wax” isn’t really wax — and whichever way you slice it certainly is a novel way to make a flavored hot cocoa.

The Daily Meal calls the UK-based Smith & Sinclair “a Willy Wonka factory for adults,” and, well… I’d say that’s a fair description. Their online store has three main offerings: Edible Cocktails, Edible Fragrances, and something called “Cocktail FIZZ.” The Edible Cocktails are probably the most straightforward treat; they’re basically gummy candies made out of cocktail ingredients — and yes, they’re actually alcoholic (they’re about seven percent ABV). The Edible Fragrances, meanwhile, are described as “delicious aromatic alcoholic vapour[s] in a light, non-stick formula that can be applied directly to the skin. And subsequently licked right off.” You can also presumably spritz them directly into your drink if you like; the Cherry Blossom and Mandarin one is said to “perfectly [pair] with a Negroni [or] any gin-based drink,” for example.

And then there are the Cocktail F.I.Z.Z.es. (I have no idea if that’s the correct way to pluralize “Cocktail F.I.Z.Z.,” but whatever — let’s just roll with it.) They’re little tablets that you drop into your drink to change their color and adjust their flavor. Although they’re non-alcoholic themselves, Smith & Sinclair typically recommends you use them in champagne, prosecco, or gin-based drinks to boost your cocktail game. The Rhubarb Mimosa one turns your drink pink; the Tropical Passion Fruit one turns it orange; and the Elderflower Spritz one turns it… actually, I’m not totally sure. The container for the tablet is green, but the photos of drinks featuring this F.I.Z.Z. don’t seem to be dramatically different than they usually are. Ah well.

In any event, given the gimmicky nature of Smith & Sinclair’s wares, it’s perhaps not unexpected that they’d also come up with edible candles whose “wax” is meant to be poured into hot drinks to add a dose of flavor. Referred to on the Smith & Sinclair website as both Edible Candles and Flaming Hot Choc Candles, they’re available in two varieties, Spiced Orange and Candy Cane Peppermint. Housed in what look like little glass jars, you light ‘em by the wick and burn ‘em the same way you would any candle; however, you’re then supposed to take two teaspoons of the melted edible “wax” and stir it into a mug of hot chocolate, giving you either spiced orange-flavored cocoa or a good ol’ fashioned peppermint hot chocolate. 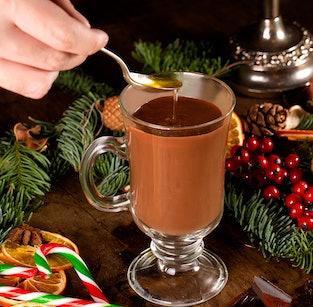 There’s a reason “wax” is in quotation marks, though: There’s no beeswax or anything involved in the making of these candles. According to the ingredients list, they’re made primarily from raw cocoa butter and extra virgin coconut oil (so, hey, they’re vegan, if that’s your jam). The flavor and scent for the spiced orange candle come from a variety of other oils — namely mandarin, blood orange, cinnamon, and clove — as well as nutmeg extract; the candy cane peppermint one, meanwhile, simply relies on peppermint extract for its minty bite.

Although Smith & Sinclair claims their invention to be “the world’s first edible ‘wax’ candle,” I’m not sure that’s strictly accurate. A number of edible candles have previously hit the market: Let Them Eat Candles’ edible chocolate candles, for example, were a Martha Stewart American Made Contest wildcard finalist in 2014; a company called Zaron Industries launched chocolate and candy candles under the “Yum Wick” name in 2012; and Nashville restaurant Fort Louise has been serving up edible beef fat candles for a year or two, to name a few. The concept itself isn’t even new — science teachers have been making edible candles with their students for ages.

But maybe the difference with Smith & Sinclair’s offering is the “wax” part — even though the candles aren’t actually made of wax, they do resemble wax much more than some of the other options out there. (Let Them Eat Candles makes no bones about the fact that their candles are made of chocolate, for example.) They’re certainly the first to propose pouring melted candles into mugs of hot chocolate for added flavor, at any rate.

Smith & Sinclair’s edible candles are £15.00 each, or about $19; they do ship internationally, but it’ll cost you — it’s £12.00, or a little over $15, to ship to the United States — and it’ll take between seven and 14 business days for your goodies to arrive. Still, though; they are pretty unique, so maybe it’s worth it. Shop Smith & Sinclair’s online store here.