Flying above the O2 arena in London, you’ll find two huge dinner tables suspended from cranes, where London in the Sky has just been erected for another year.

Offering incredible views over the skyline paired with delicious food, this is a whole new level of dining experience.

Read more: You can now fly from London to Paris on a private jet for less than $850, fine dining and Champagne included

It costs £199 ($259) for a one-hour, three-course dinner with wine, but there are cheaper options such as breakfast or afternoon tea.

On a chilly spring evening, I went to the press launch to experience the dinner. This is what it was like.

I arrived at an area by the side of the O2 to see two huge cranes which would be used to hoist us into the sky. 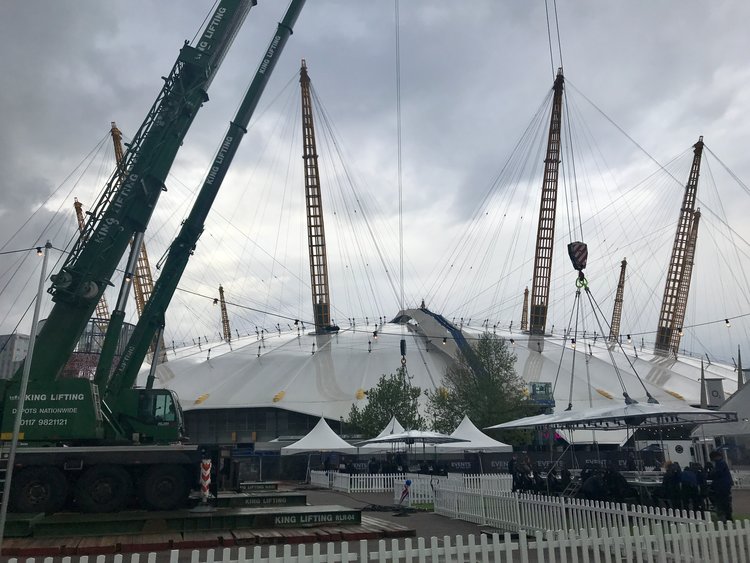 The entrance area had been nicely done, and I could imagine it would be lovely on a warmer, more summery day. 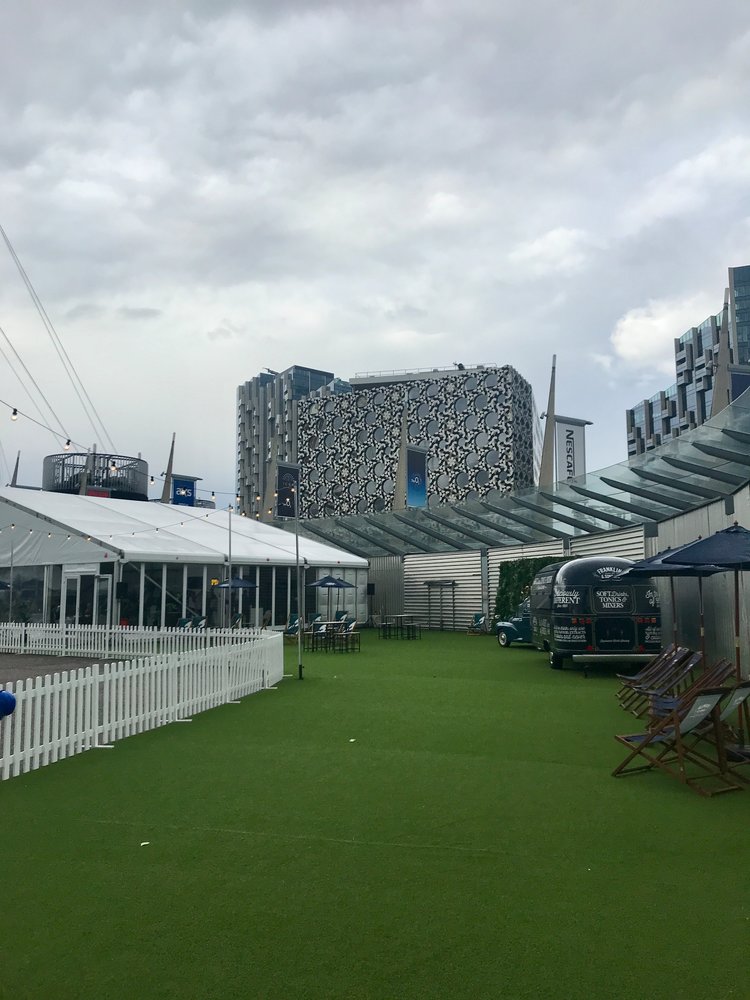 Sadly it wasn’t really deck-chair weather when I visited.

I had a quick look at the 22-seat table which would soon be raised 100ft into the sky, and I was pleased to see a cover, should the ominous heavens decide to open. 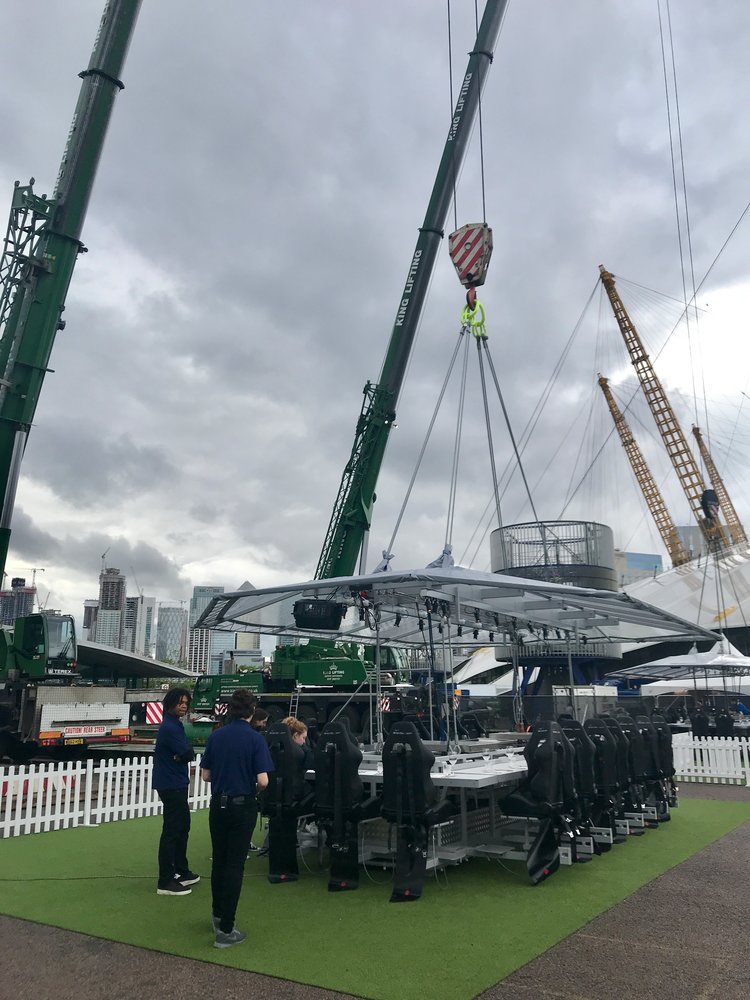 There’s a big tent with a bar where you check in and wait before your flight — if you’re not great with heights, it might be wise to get a drink to steady the nerves. 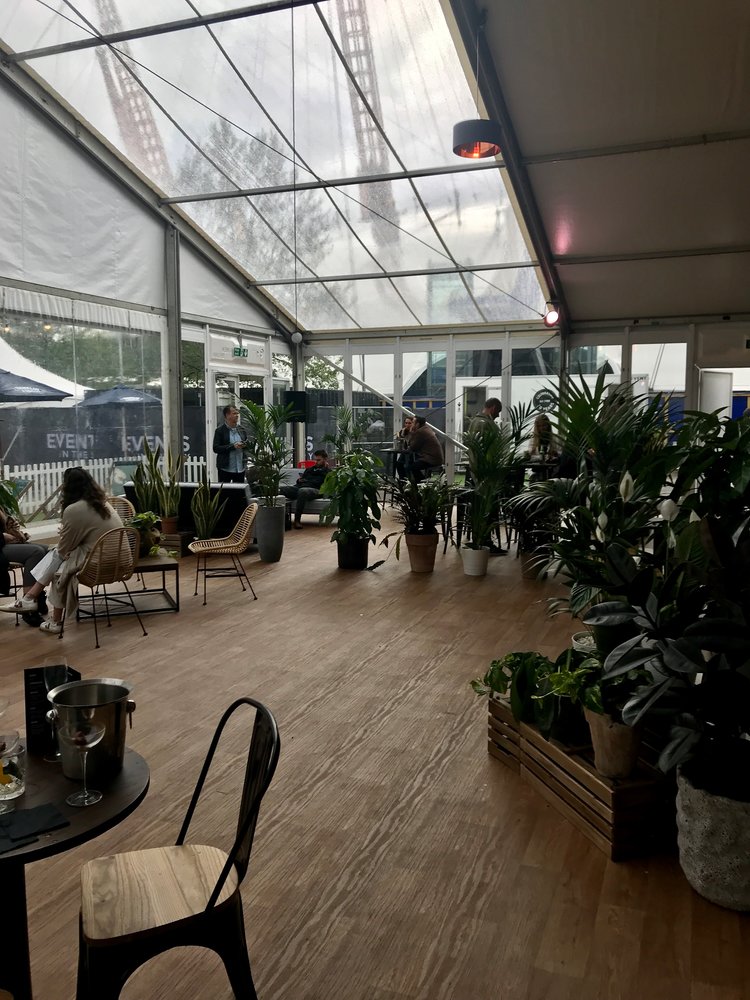 Then it was time to be strapped in. 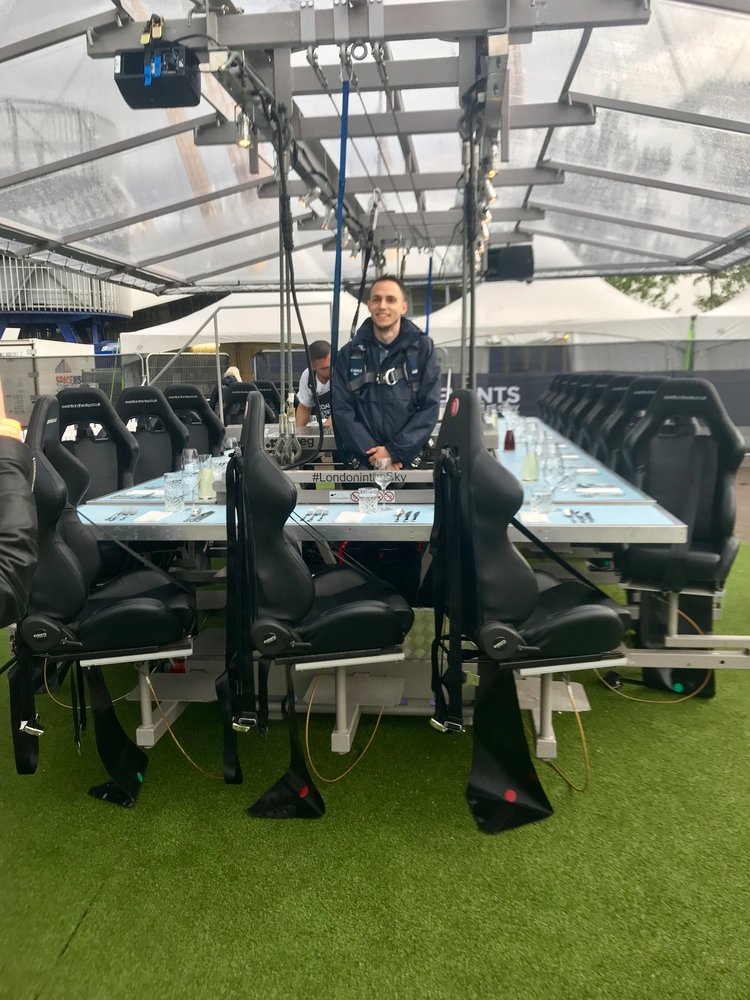 As I climbed into my seat and was secured into my harness, it felt a bit like I was going on a roller-coaster. Pleasingly, I did feel snug and secure, and I was excited to take off.

Our chef and two members of staff were already in the middle of the 22-seat rectangular table, tied up to harnesses. 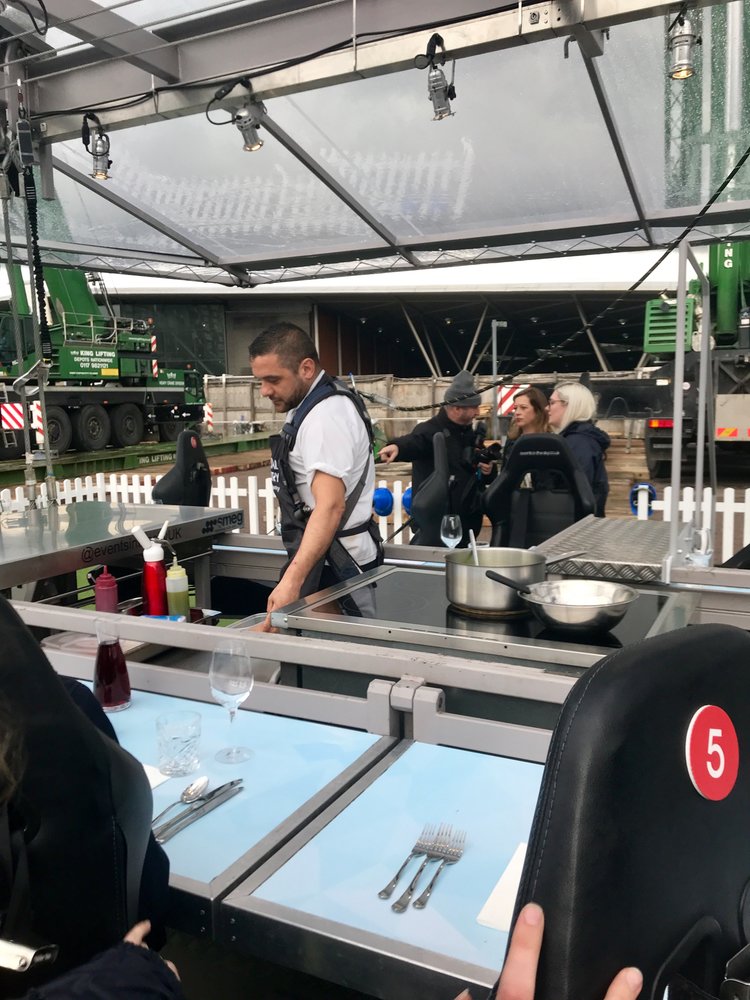 The chef was already cooking on the hob in front of me and it smelled delicious.

Wine was poured, and my starter was presented just before we took off. 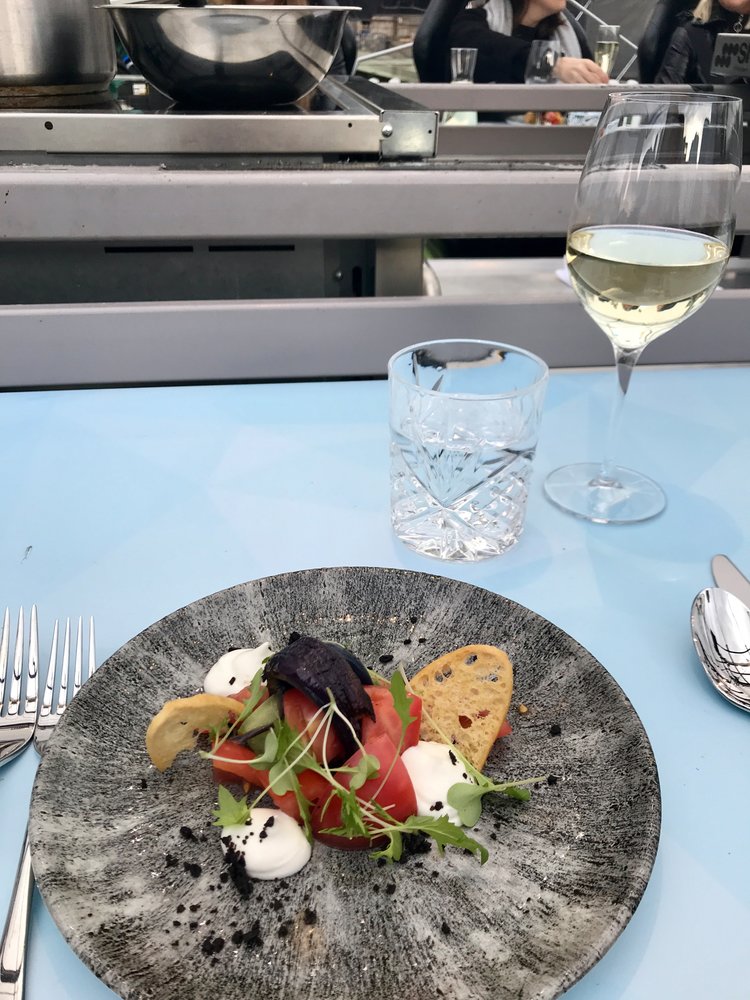 The starter was heritage tomato and whipped feta salad with black olive, basil and agro dolce red onion. There was a vegan option without the feta, too.

The menu was created by Social Pantry, which has three cafes across London and also does catering. 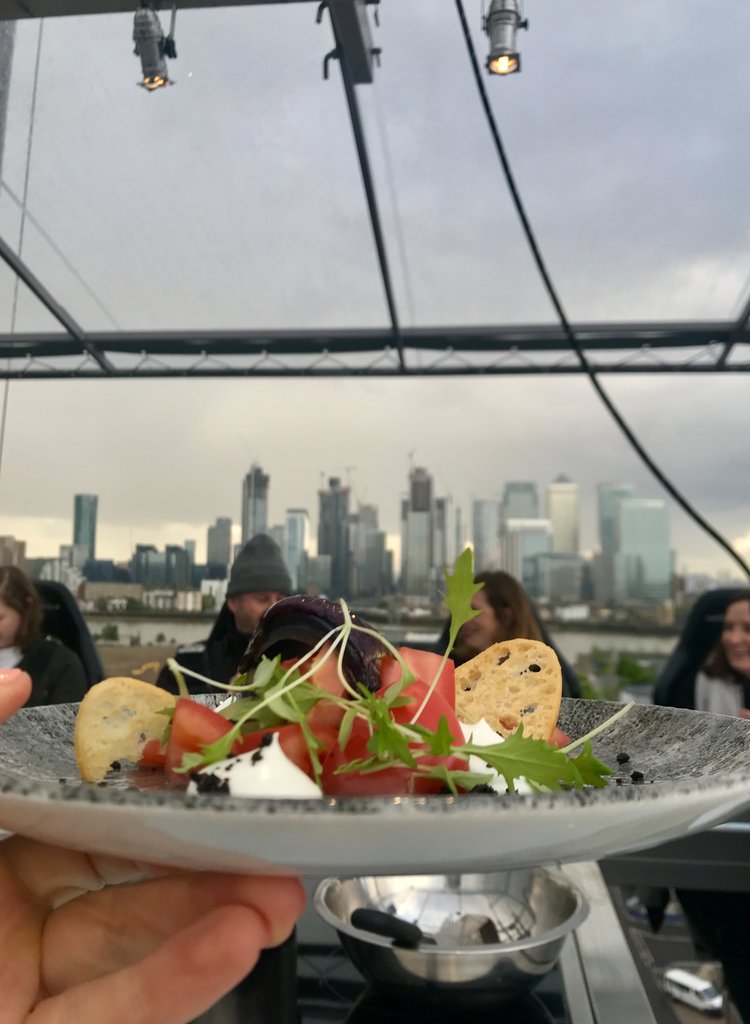 It was time to go up! We were slowly raised a short way off the ground for a quick security briefing before being lifted to 100ft high. 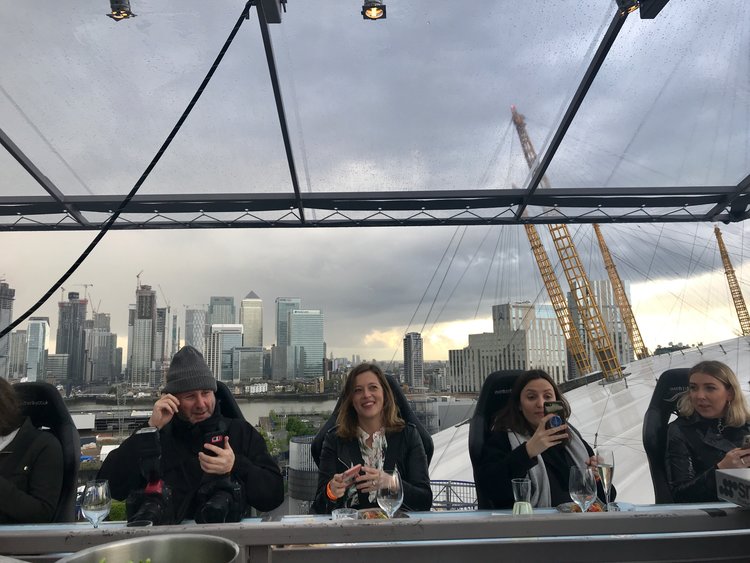 Two tables go up at once, and it was cool to see the others to get an idea for what we looked like, too. 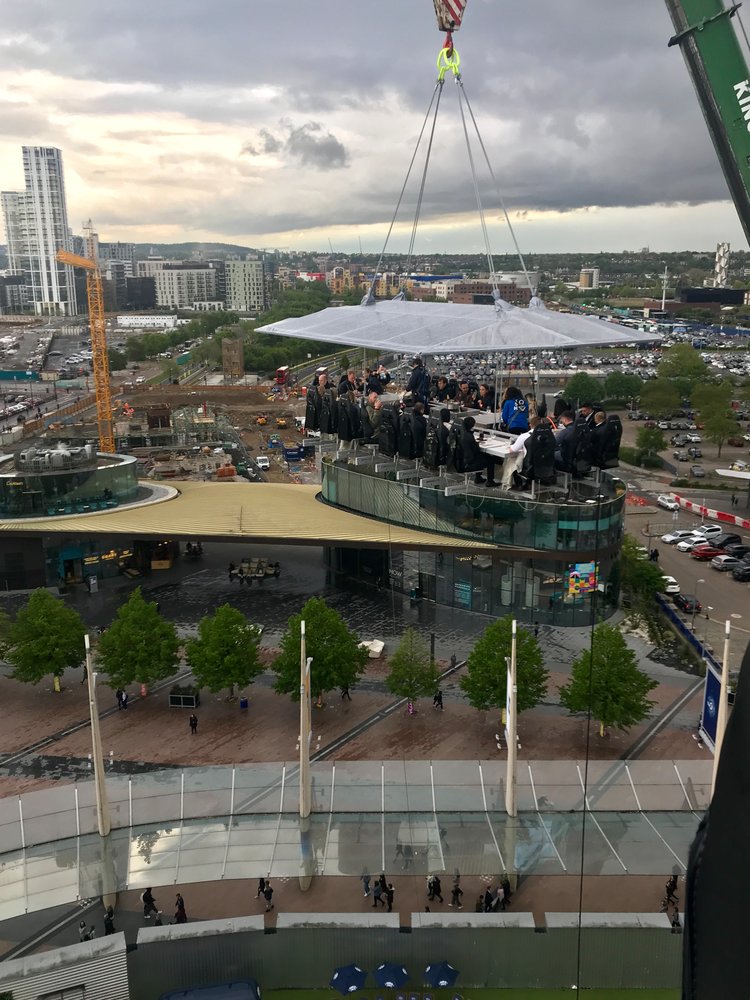 It didn’t feel scary, but it was pretty windy. My napkin didn’t last long on my lap before blowing away. 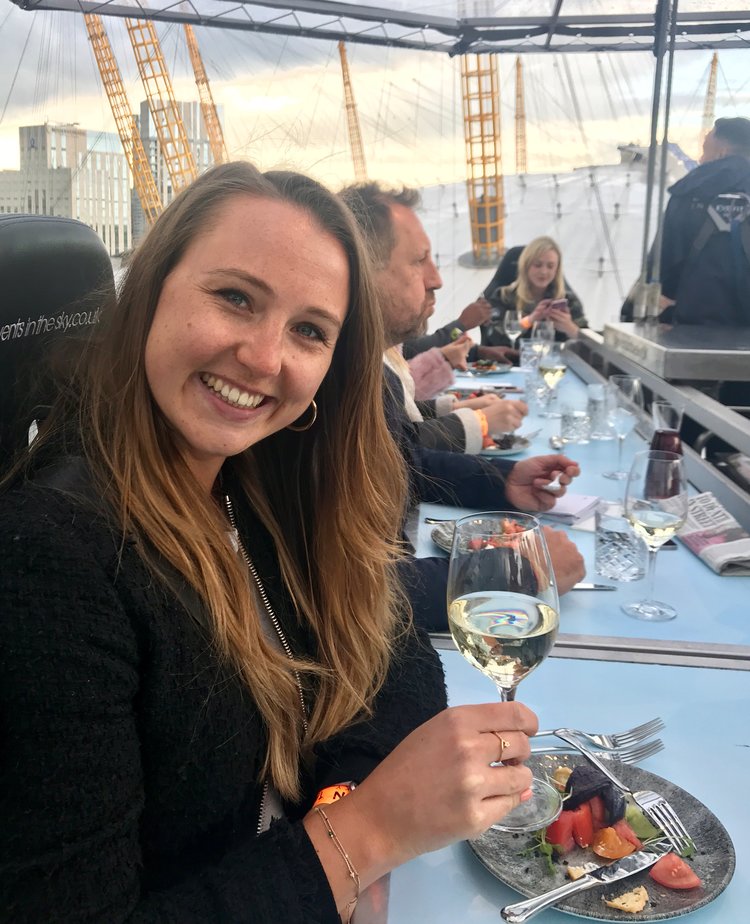 Luckily, the sky was beginning to clear and we even saw some rainbows. 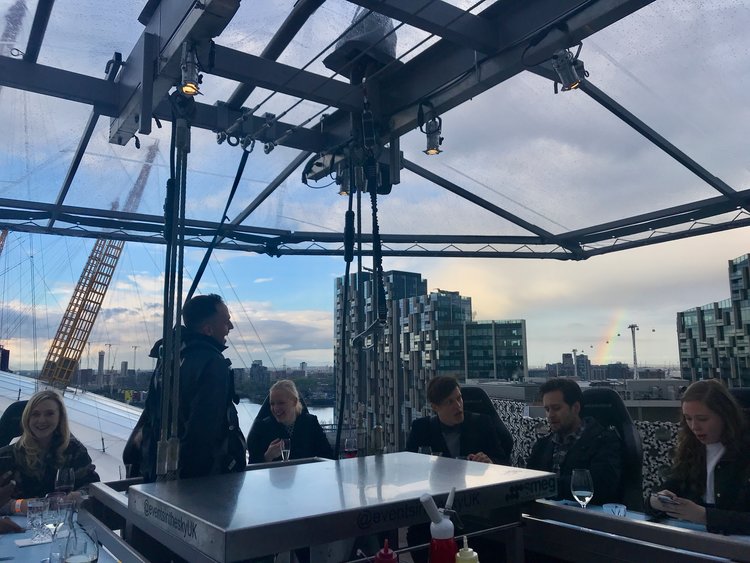 The table was never entirely still, but it wasn’t rocking in the wind or anything. 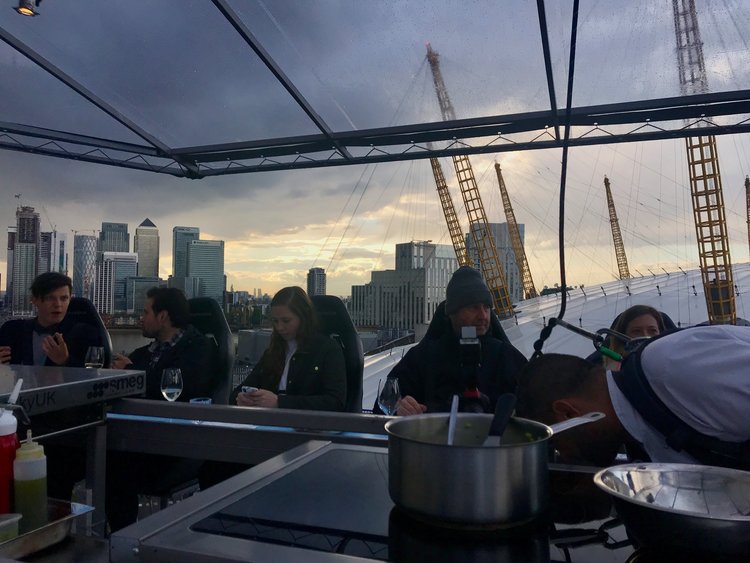 It was rotated every five minutes so your view never stayed the same.

There was red and white wine on the table, and plenty of it. 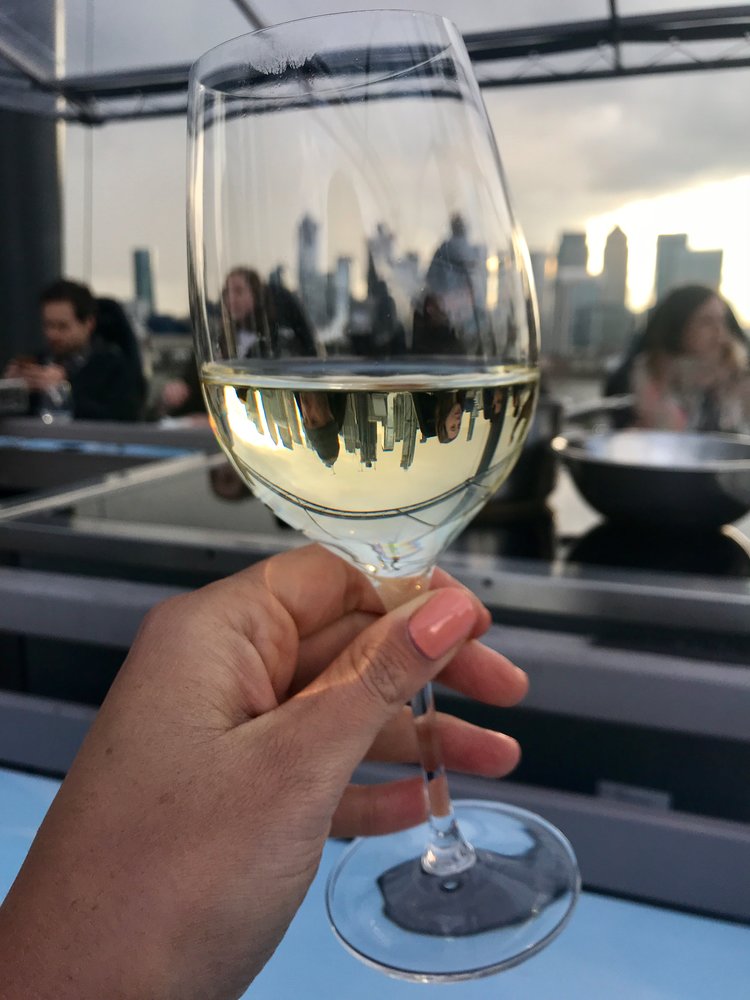 We got to watch our chef plate up the main course in front of us. 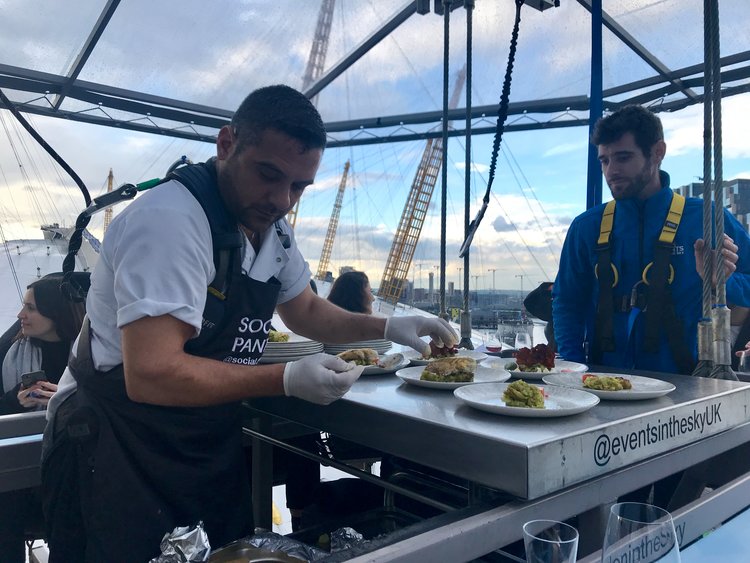 There were three options, which we’d chosen from in advance:

It had pretty much all been prepared in advance — the chicken and potato was kept hot on foil-covered trays in a warm cupboard under the stove, upon which the peas and beans were warmed up. It was just a case of plating up and eating.

I went for the chicken, which was genuinely delicious (despite my average picture). However, the harness held me back from leaning too far forwards to get to the food without dropping it on myself or down below. If you were hit on the head by a pea falling from the sky, I apologise. 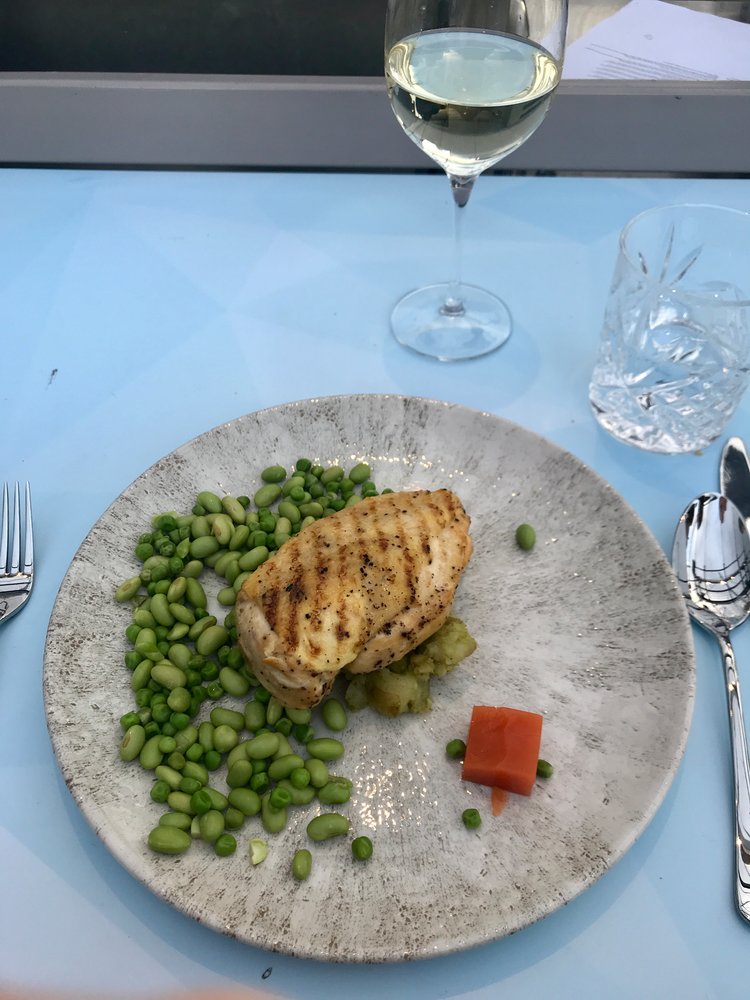 I asked the chef whether the menu had been specifically designed to be eaten at height, and he explained that the main thinking was that it was home-cooking-inspired, but elevated (in more ways than one).

They didn’t want to make the food too fussy “because most Brits are fussy,” he said.

The set-up probably wouldn’t be that great if you were a large group, as you can only really talk to the people next to you, unless you’re sitting round a corner. 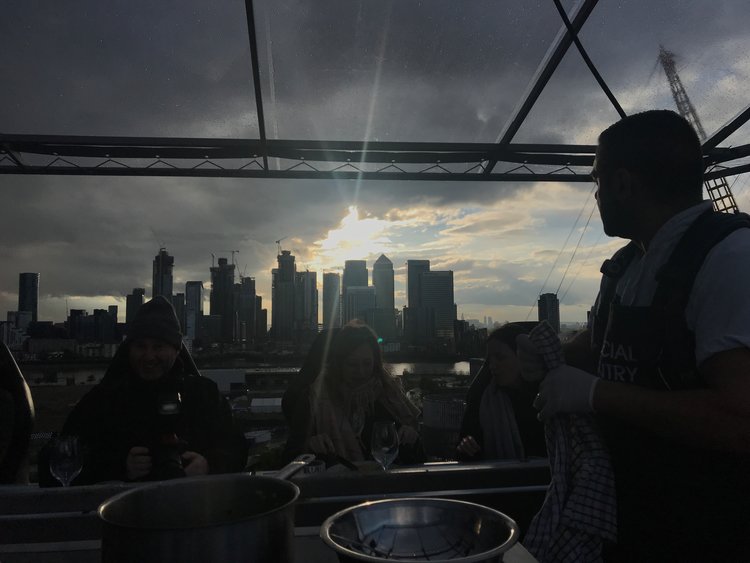 Still, the sun was coming out and the vibe was really fun, largely thanks to the playlist of tunes playing pretty loudly. 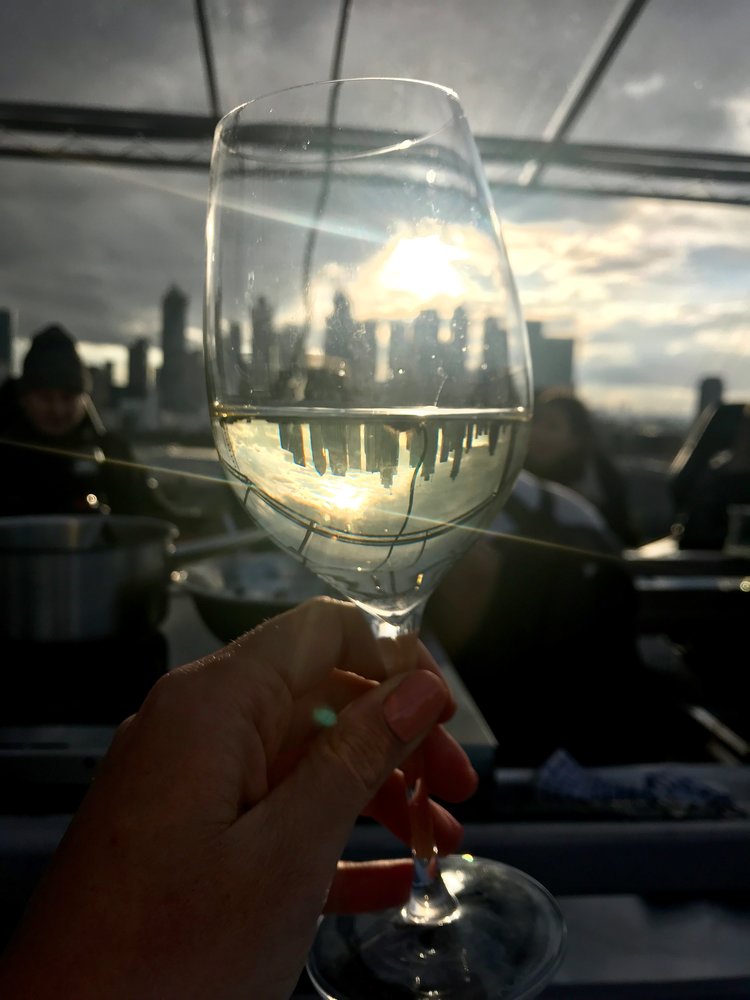 The soundtrack included “Torn” by Natalie Imbruglia (hopefully not a reference to our harnesses), “Walking on Sunshine” by Katrina and the Waves (made sense), “Tubthumping (I get knocked down, but I get up again)” by Chumbawamba (hopefully not our fate), and “The Final Countdown” by Europe (umm…).

Needless to say, many selfies were taken. 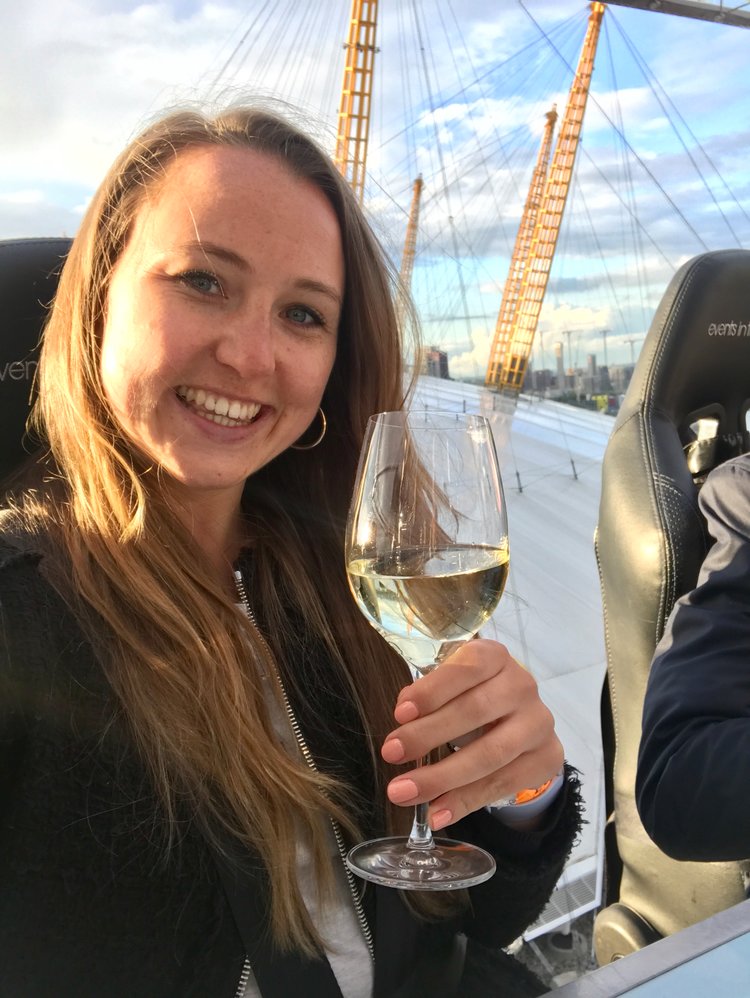 The chairs rotated and also reclined, which was mildly terrifying, but also very cool. 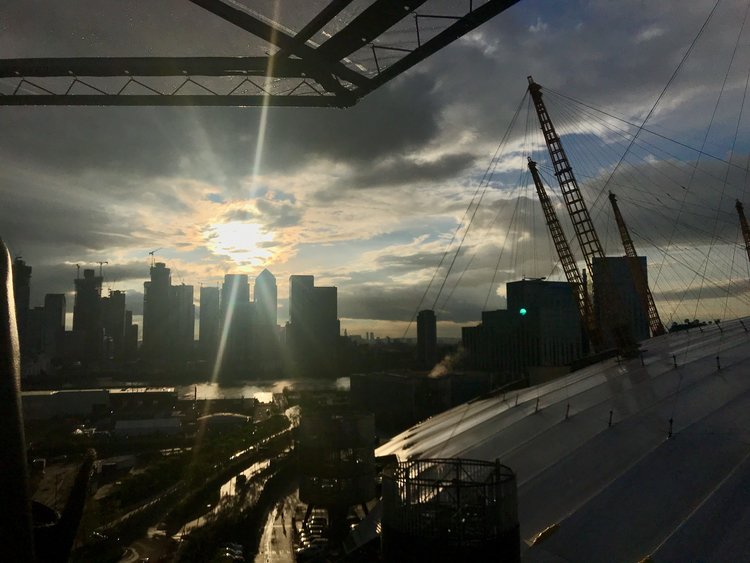 Pudding time! The options were a citrus tart with raspberry coulis, lemon crisp, and honeycomb… 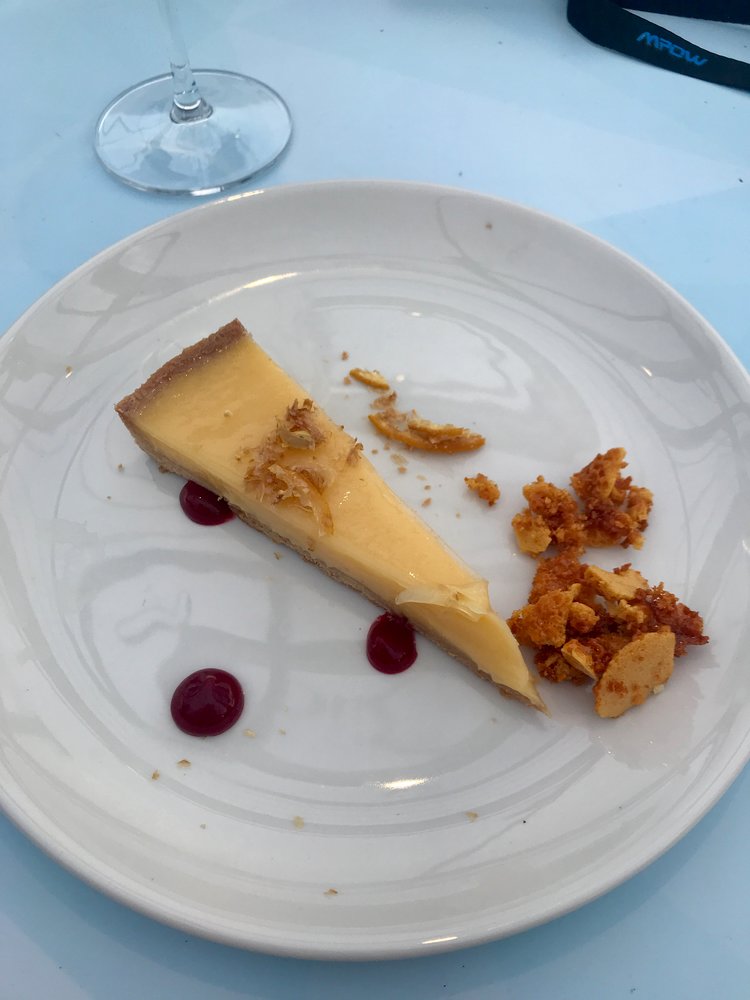 …and a vegan brownie with summer berry coulis and honeycomb. If you play it right and befriend the chef like I did, you might get to have both. 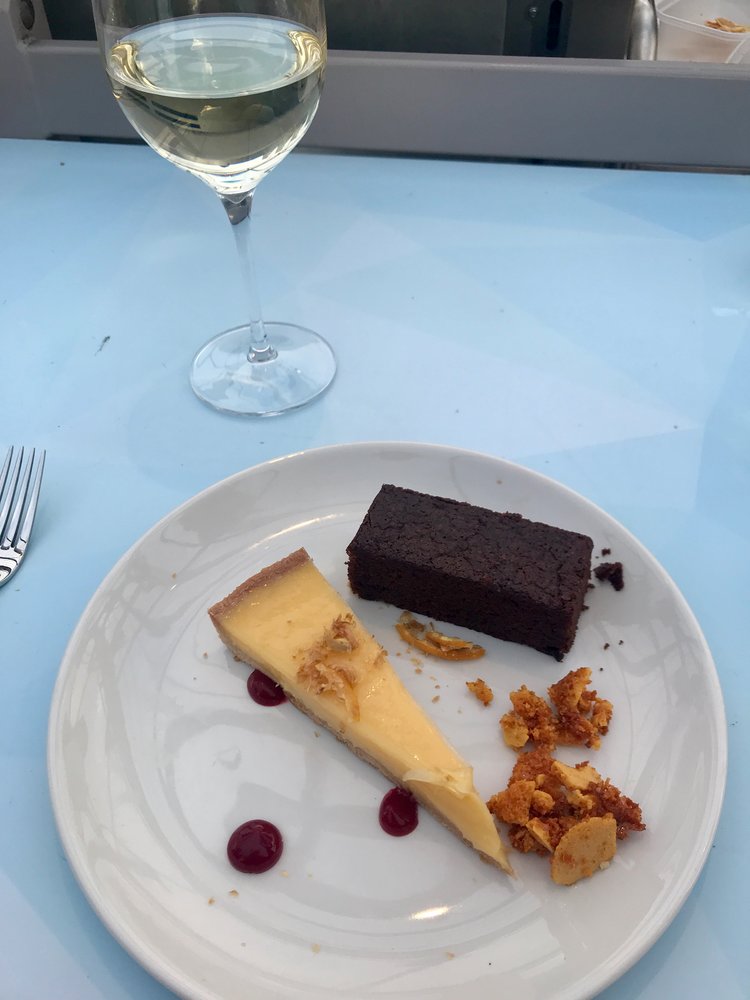 Having three courses in the space of an hour would normally be quite rushed, but the dishes weren’t too big or heavy.

It was pretty breathtaking to see London in a completely new way from a brand new viewpoint. 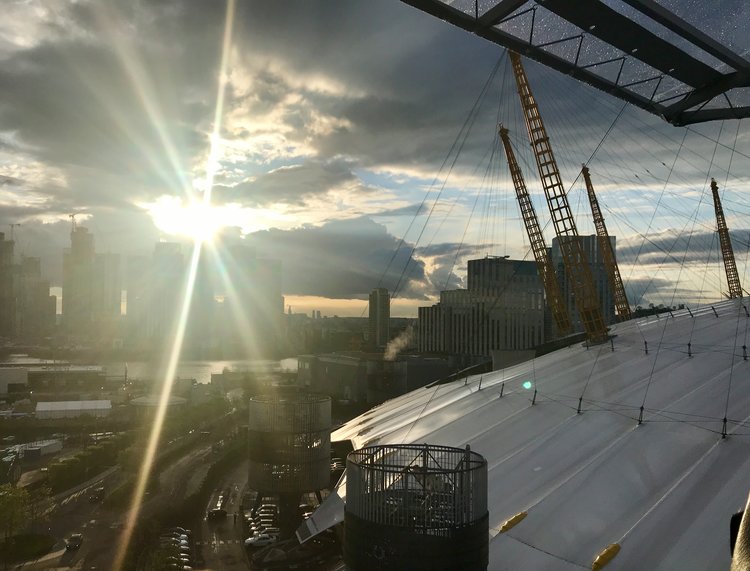 As the sun began to set, it was time for us to descend (which I was actually ready for, as it was quite cold).

Since landing, meals on the ground have never bored me more. 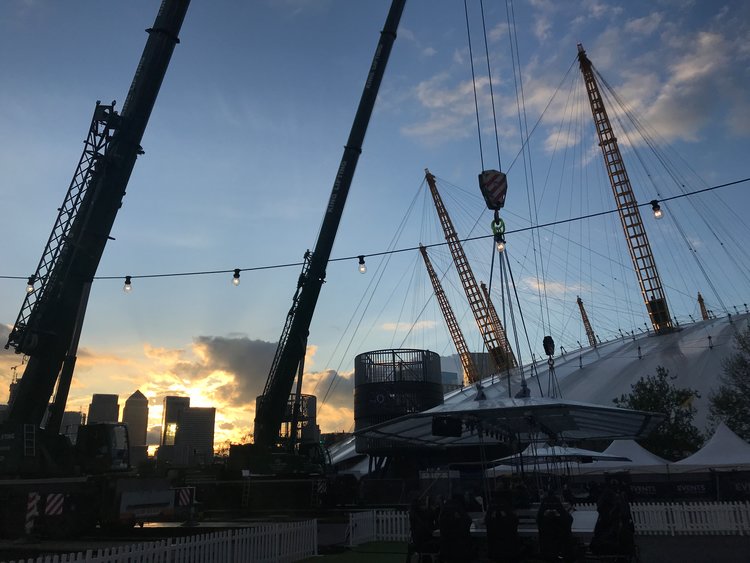