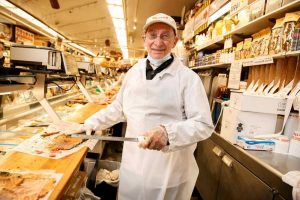 Legendary Jewish lox slicer Len Berk, 91, is back and brandishing his 18-inch knife behind the counter at Zabar’s after a yearlong absence due to the pandemic.

“I was nervous,” the nonagenarian told The Post of his return to work on Thursdays. “But when I picked up a knife to slice my first salmon, it was like riding a bike. I didn’t forget.”

A former accountant, Berk has spent the last 26 years of his retirement working at the Upper West Side institution, where his famously picky clientele over the years has included Jerry Seinfeld, Jerry Stiller and Woody Allen’s mom.

He said there are some 20 kinds of customers, including “the watcher” (who glares), “the taster” (who noshes on free samples) and “the multitasker” (who simultaneously shops at the cheese, meat and fish counters to save time).

“People come to me repeatedly,” said Berk, who has reclaimed his long-standing far-left counter position. “Some people say that I’m their lox slicer and they’ll always come to me, even if they have to wait extra time.”

To satisfy the demands of the store’s particular pescatarians, Berk specializes in nearly diaphanous slices.

“Thin is the thing,” he said. “People go berserk if it’s not thin enough. They want it thinner than anyone can do.”

To get the $49-per-pound lox just right, “you have to become one with the fish,” said Berk.

“I found that slicing salmon is a very sensual experience,” he added. “I slide my hands across the oily surface of the fish, and it’s so soothing and relaxing — it’s a very pleasant feeling.”

Last March, his employment was temporarily furloughed when the city entered COVID-19 lockdown.

It was a blow for Berk.

“I thought, ‘It’s my life’ — part of me wanted to make my own decision. I might very well have wanted to take the gamble and work,” said the married grandfather of seven, who still drives in to work from Pelham.

“Work and Zabar’s are very important to me.”

Until his return to work a few weeks ago, Berk would occasionally visit as a customer, but with a heavy heart.

“It was bittersweet,” said Berk, who admitted that after all these years, “I was almost an institution there. I was told by the manager that people were constantly asking for me over the past year.”

Berk first got the job after seeing a newspaper ad and trying out on the spot for co-owner Saul Zabar, one year his senior.

“I didn’t do it for the money,” said the lifelong foodie, who makes $18 an hour as a fish slicer — far less than the $200 rate he commanded as a certified public accountant.

“I did it to have something to do. I felt like it was necessary as a human being to contribute to society.

“Sure, I made more money then, but I never had this much fun.”

And now that he’s full vaccinated, he’s not about to let the grass grow under his feet.

“I wanted to go back from the day I stopped,” said Berk, who got his second dose in February.