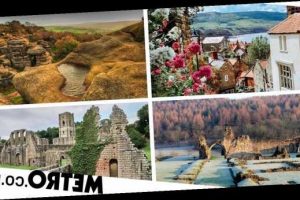 August 1 marks the most important day in the UK calendar: Yorkshire Day.

It’s a day for celebrating God’s Own County in all its heady glory. Whether you’re lucky enough to live up there, you’re descended from good old Yorkshire stock or you’re simply partial to the odd Yorkshire pud and a pint of Black Sheep, today’s your day. And what does Yorkshire do best? Natural beauty.

Yorkshire is a sprawling mass of countryside, from moorlands and seasides to forests and dales. You only have go a few miles out of Leeds, Sheffield and Doncaster to find yourself smack in the middle of a green oasis.

If you’re craving a little vitamin N, there’s nowhere as verdant and wild as Yorkshire. Here are some of the most beautiful nature spots:

Heather moorland is one of the world’s rarest habitats. It’s home to red grouse, short eared owls and lapwings.

People have lived on Ilkley Moor for thousands of years and today, it’s the perfect platform for looking over Wharfdale and for watching sky activities like eclipses.

Epic on Bonfire Night, romantic in winter and beautiful in the summer.

Enjoy the Dales at their finest by scaling the Yorkshire Three Peaks: Pen-y-Ghent, Whernside and Ingleborough. The climbing may be tough but the views are so worth it. To officially complete the challenge, you’ve got to climb all three peaks in under 12 hours – but if you just want to bask in the awesomeness of the dales, just go at your own speed.

If you’ve not got a car and like the idea of having a day in nature while staying in a city, head up to Sheffield. In the South-West ‘burbs is Endcliffe Park – a beautiful oasis of beautifully tended gardens and babbling brooks which lead you into the Peak District.

Walk, jog or cycle along Porter Brook towards Forge Dam Park and before you know it, you’ll be surrounded by unencumbered countryside.

Into running? Check out the Round Sheffield Run – a local trail race that takes you on a cross-country canter through the park and into woodland and forest glades. Perfect.

Just down the road from Whitby lies one of the most beautiful pockets of seaside in the UK – fact. Robin Hood’s Bay used be the place where pirates would smuggle contraband onto the mainland. Today, it’s a collection of houses overlooking the North Sea, with a beach perfect for rock pooling, a cracking chippy and a picturesque pub on the cliff edge.

If you’re feeling really energetic, you can walk along the coastal path to Whitby (it’s just over 6 miles but it takes around four hours). Just make sure you buy a bag of Dolly Mixtures from the seashore sweet shop before you start.

In between York and Malton (Yorkshire’s Food Capital’) lies the Derwent valley and the riverside ruins of Kirkham Priory.

Spend the day hiking or cycling around the area of outstanding beauty and stop off at the priory for a picnic overlooking the Derwent. Then head to Malton to refuel on craft beer and artisan food.

The Secret Garden, The History Boys and a load of other movies have been filmed at Fountains Abbey because of its awe-inspiring views.

The ruins date back to 1132 and functioned as an abbey until Henry VIII did his thing and burnt it to the ground.

Today, it’s run by the National Trust as an UNESCO World Heritage Site and sits within the Study Royal Park.

Want to Tucked away in a little wood outside of Malham, the Gordale Beck cascades over a limestone wall and into a deep pool. Over the past 1.5 million years, Malham has been covered in massive sheets of ice and each time the glaciers melted, the rocks were reshaped and moved – creating the gorge we see today.

Spurn Point is a tidal island that stretches out into the North Sea. Watch out for sand dunes, lizards and mudflats on the 3.5-mile walk out to the point and enjoy the vastness of the blue space around you.

Wolverine cavern… named after the wolverine remains that were found, dating back 83 000 years. The cavern is complete with a stunning calcite curtain. Book your tickets to go underground at our website: https://www.stumpcrosscaverns.co.uk/ #caves #yorkshire #dales #underground

Few places are as magical as Stump Cross Caverns – a series of underground caves full of crystals. Prehistoric mud pools, underground waterfalls and stalagmites come together to make an awe-inspiring, dreamy kingdom. You can even buy your own crystals or slices of multicoloured rock to take home.

Sure, these are a stack of huge rocks that were supposedly created by druids. Sure, that might not sound that interesting. IRL, however, this is one of the most exciting and interesting places in North Yorkshire – trust me. Climb as high as you dare to look out across miles of heather Moreland and bring some Tupperware for all the wild bilberries (they make an epic crumble) that grow around the area.

Just as you’re leaving Knaresborough, pop in to Mother Shipton’s Cave where you’ll find The Petrifying Well. The water there is so rich in sulfate and carbonate that anything it touches, it covers in a silt coating – making it look like stone.

You’ll find all kinds of objects that appear to have been petrified, including teddies and hats. Oh, and Knaresborough is such an attractive town with plenty of local businesses and pubs so do be sure to stop for a pint while you’re there.

END_OF_DOCUMENT_TOKEN_TO_BE_REPLACED

END_OF_DOCUMENT_TOKEN_TO_BE_REPLACED
We and our partners use cookies on this site to improve our service, perform analytics, personalize advertising, measure advertising performance, and remember website preferences.Ok