Bogotá just gets better and better. The city hums with energy and possibility, offering a thriving environment for creativity that makes its negative aspects — the pollution, the traffic — not quite as noticeable. These days, Bogotá is blossoming with new ideas, from collectives that house everything from feminist bookshops to hair salons, to offbeat, all-day bars that organize gay tango events, to exquisite dining in rough-and-ready neighborhoods. The dazzling talents of Bogotanos, from culinary flourishes to chic shoemaking to visual art innovation, is on display like never before.

Scattered between the garages and auto parts shops of the San Felipe neighborhood are a dozen of the city’s newer art galleries. Spend an afternoon strolling the small streets, exploring work by new and established Colombian and Latin American artists. Instituto de Visión, run by a team of women, is worth seeking out — there’s no sign outside, just an old-school punctuation mark emoji on the door — for its dedication to up-and-coming artists. On a recent visit, SGR Galería was exhibiting a collection of cartoon-inspired landscape paintings by the Colombian artist Paula Senior, and FLORA ars + natura had a show of work by the noteworthy Venezuelan artist Ricardo Obrégon. In between galleries, stop by Azahar Coffee, a newly opened outpost from one of the city’s artisanal coffee companies, for a caffeine jolt or artisanal ginger-and-chili soda. 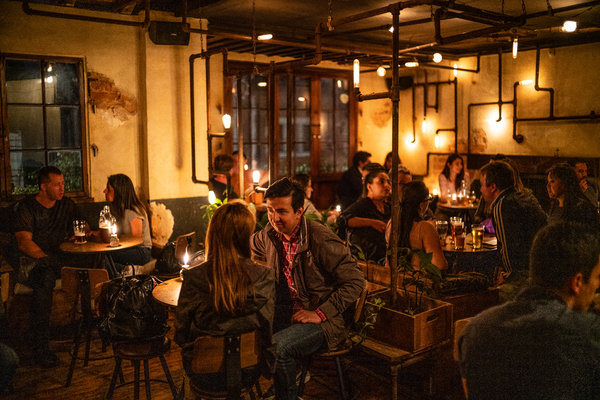 Bogotá has gone cocktail crazy. Mixologists from San Francisco, New York and elsewhere are designing menus around the city, complementing the skills of local bartenders who reach deep into Colombia’s astounding array of local ingredients for inspiration. Charming Huerta Bar Coctelería Artesanal, in the tony Quinta Camacho, has a handful of menus: a seasonal menu, a menu of fruitier drinks and one that focuses on more alcohol-forward concoctions. Enthusiastic bartenders tout the virtues of purple cucumber, shiitake mushroom elixir and eucalyptus-infused vermouth; try telling them what you usually like and give them free rein. If cocktails aren’t for you, El Mono Bandido, just around the corner, is at the top of the city’s equally popular craft beer wave.

Like all the best neighborhood restaurants, El Chato has cheery service, shareable dishes and fills up nightly with groups of friends gathering among the hodgepodge of bookcases and tables for lively celebrations. Book ahead for dinner at this cozy spot, where the chef Álvaro Clavijo’s impeccable pedigree (he’s worked at Noma and Per Se) is put to good use in the surprisingly approachable menu of dishes that recently included grilled mushrooms and squid in a nettle broth, lamb ribs dusted with feta and sunflower seeds, and corn-flavored ice cream. Dinner for two runs around 200,000 Colombian pesos, or about $63. Everything is served with local beer and a smile.

It’s possible to lose hours wandering the paths of Paloquemao: This enormous market is lined with stalls piled high with colorful and extraordinarily varied fruits, and dozens of species of potatoes. You can breakfast for less than the equivalent of $5 on arepas fresh off the grill and stuffed with cheese, along with juices made from mango, strawberry, lulo and many more fruits you’ve never seen or heard of before. In between snacking and sampling new produce, stock up on woven baskets, bird cages and bottles of colorful potions for various purposes, including attracting money, scaring off spirits, securing good luck and raising the dead.

Check out some of Bogotá’s most interesting designers at Casa Précis, where you’ll find shoes from Gal vs. Buck, a gender-neutral line of colorful leather wingtips with fringe. You can also pick up chic straw hats, jewelry and brightly patterned swimsuits from the Colombian label Baobab. Trama Casa de Creadores is a former house where each room is now occupied by a different business. There’s a hairdresser and tattoo artist if you want a new look, but for something less permanent pick up fabulous high-waisted pants and skirts made in Colombia from colorfully patterned African cloth, designed by Lia Samantha. Upstairs at Alma de Coco, artisanal body lotions, face masks and cosmetics are made from cacao and coconut oil from Colombia’s Pacific Coast. El Telar de las Palabras, a bookshop selling only books by women, is on the ground floor.

La Candelaria, with its small alleyways, historic buildings and profusion of street art, has long been one of the few neighborhoods in the city without a fine dining scene. That changed with the arrival of Prudencia, a high-ceilinged, glass-roofed space with a thoughtful menu that changes daily, and might include beef short ribs, a beet-and-strawberry salad, tofu and fennel bisque. Locally brewed ciders or housemade grapefruit soda make a fitting end to a leisurely lunch before heading back out to explore the neighborhood’s colorful political murals and imposing government buildings that date back a couple of centuries. Lunch for two, around 100,000 Colombian pesos.

The resting place for politicians and sculptors, Bogotá’s Cementerio Central is a shabby, romantic and still-majestic place to visit. Its mausoleums, in varying states of upkeep, hold the remains of a dozen Colombian presidents, illustrious families and artists. Walk the paths and you’ll see ornate statues, locals lighting candles, and the faithful leaving flowers and prayers at the feet of the Virgin Mary statue. It’s probably the most tranquil place in the city. Note that you may be asked for identification to enter. From here, stroll a block down Calle 24, past colorful street art, to Café de la Fonda, a quiet neighborhood spot, for an excellent cup of Colombian coffee. Pick up a few bags (12,000 Colombian pesos) to bring home while you’re at it.

Bogotá is now home to a number of clever collectives: complexes that house shops, bars, cafes and sometimes performance spaces under one roof, and which are perfect places to stop for a midday break. For a gay-friendly, artsy space, head to A Seis Manos, where small stores sell vintage clothes, ceramics and trendy enamel pins, and a whimsically decorated all-day bar turns out reasonably priced cocktails and coffees. Check the calendar for the roster of activities, which range from gay tango to pub quizzes. For a swankier option, try Casa Arsenal, where the city’s well-heeled relax in a courtyard filled with tables and chairs, surrounded by miniature versions of chic craft breweries, cafes, patisseries and restaurants, as well as a bookshop and a co-working space.

Set aside several hours for dinner at one of Bogotá’s most fun and inventive restaurants. Villanos en Bermudas (Villains in Shorts) is the brainchild of a Mexican and an Argentine chef, who have turned this elegant house in Chapinero into a serious dining destination. Start with a cocktail, then move on to the 10-course tasting menu, which might range from simple dishes like homemade bread dipped in fermented black garlic butter, to more complex creations like chickpea mousse with passion fruit ice cream. The menu changes every couple of weeks. Dinner for two, around 300,000 Colombian pesos.

On Sunday mornings, much of Carrera 7, one of the city’s main arteries, is closed to vehicles, and locals hit the street to cycle, jog and walk their dogs. Join them for a run or stroll, stopping to breakfast on fresh juice and fruit salad at one of the numerous stalls set up along the way. Free fitness classes, part of a citywide health initiative, are held in many of the city’s parks throughout the morning, so aim to stop by one on your stroll (Parque Nacional Enrique Olaya Herrera is usually a fun spot, a favorite of 20-somethings dressed like they just came from the club). Led by enthusiastic instructors, with rhythmic music blasting, these are energetic, informal and full of locals of all ages and fitness levels, following along and having a great time, rain or shine.

Sunday, when much of the city shuts down, is an excellent day for leisurely museum explorations. Bogotá’s Museo del Oro (free on Sundays, 4,000 pesos at other times) is deservedly famous for its immense and well-signed collection of intricate, glowing masks, statues and jewelry that date back to pre-Hispanic times. After you’ve had your fill of the shiny stuff, turn south on Carrera 7 for several activity-packed blocks of games, street performances, live music, food stalls and more. It’s a popular city gathering place for affordable fun on Sunday afternoons.

If climbing the steep mile up Monserrate Mountain isn’t your thing, get a milder workout by walking around the hilly paths and gardens of the one-time home of the Liberator, Simón Bolívar. The simply furnished rooms of the Quinta de Bolívar (free on Sundays, 3,000 pesos at other times) are surrounded by cobblestone paths that curve through an enormous variety of plants and statues. Bolívar didn’t live here for much of the 10 years that he owned the house, but you can see why he came back here between independence campaigns: The lush gardens are surprisingly free from urban noise and offer some of the freshest, least polluted air in the city.

If you’re looking to rent an apartment through Airbnb for your stay, there is a good range of apartments in Chapinero, a central neighborhood with easy access to both the north and south of the city. Expect to pay between $40 and $90 for a one-bedroom.

Homey Casa Leleyte (Calle 64 #3A-29; facebook.com/Casa-Lėlytė-783126315184861; doubles from $100, including breakfast) opened in 2017 with just four rooms, an Instagram-worthy bar with midcentury modern furniture, and a colorful art collection, all in a spectacularly central spot. 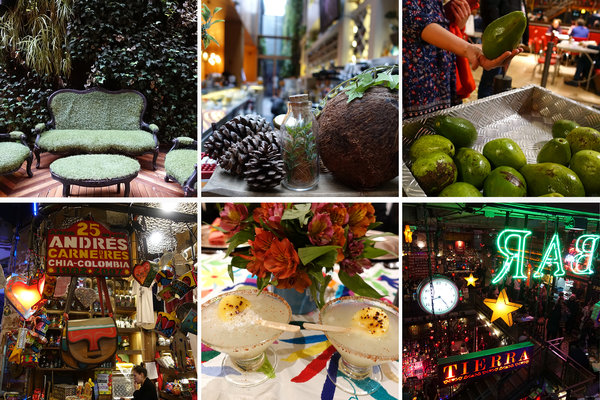 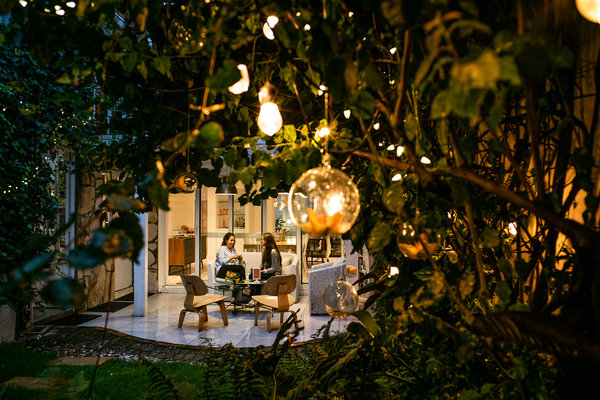