More than anywhere else in this multiethnic country, Salvador is steeped in Afro-Brazilian culture — from the worship of Yoruba deities (orixás), to the acrobatic practice of capoeira, to a cuisine tinged with deep orange dendê oil and smoldering with a stronger dose of hot peppers than the delicate-tongued rest of the country can handle. The city’s history is rich in literature — it was the home of Jorge Amado, among others — and intertwined with colonialism and the slave trade (Salvador was Brazil’s first capital, from 1549 to 1763). Today, its youthful energy and deep musical traditions make for a vibrant, often open-air night life, even when it’s not Carnaval (this year from Feb. 28 to March 5). And when it is — well, let’s just say Rio’s version looks like teatime at Buckingham Palace by comparison. Alas, crime rates mean not every stretch of town can be explored at will, but dirt-cheap ride-share services make it easy to get around safely.

Perched high above Bay of All Saints in the Upper City, the neighborhood of Pelourinho is in the heart of the historic center, a tangle of cobblestone streets and brightly painted colonial buildings with wrought iron balconies that is as Instagrammable as it is lively. Drum groups pound away in the streets; when they get too loud, flee to pockets of culture, like the Museu Afro-Brasileiro (entrance 6 reais, or about $1.60). Don’t miss the 27 carved-wood panels of orixás — spirits of Candomblé, the syncretic religious practice that pervades life here — by Carybé, an Argentine-turned-Soteropolitano (as locals are known). The gilded 18th-century São Francisco Church and Convent (5 reais) will leave your jaw agape; don’t bother closing it on your way out, since across the street you’ll want to try a scoop of the caraíba ice cream (acerola cherry, ginger and lime) at Le Glacier Laporte. Is Pelourinho touristy? Yes. Should you be wary of pickpockets? Yes. Can you visit Salvador without wandering its streets? Not a chance.

Head up Ladeira do Carmo (Carmo Hill) past Carmo Church into the next neighborhood, Santo Antônio Alem do Carmo (Santo Antônio Beyond Carmo). This uncreatively named, but charming, and ever more hip area has ateliers, cafes and bars with live music along its main — and essentially only — drag, Rua Direita de Santo Antônio (Straight Street of Santo Antônio, no joke). Most businesses on the west side have stunning views of the bay, so pop into any for a look and a sunset coffee or beer — unless you’re staying in an inn along this stretch, in which case you can watch from your own balcony. Just be sure you head to Forte da Capoeira around 7 p.m. for a demonstration of capoeira, a mesmerizing martial-arts-like tradition with origins in African rituals brought to Brazil during slavery and routinely outlawed into the 20th century. 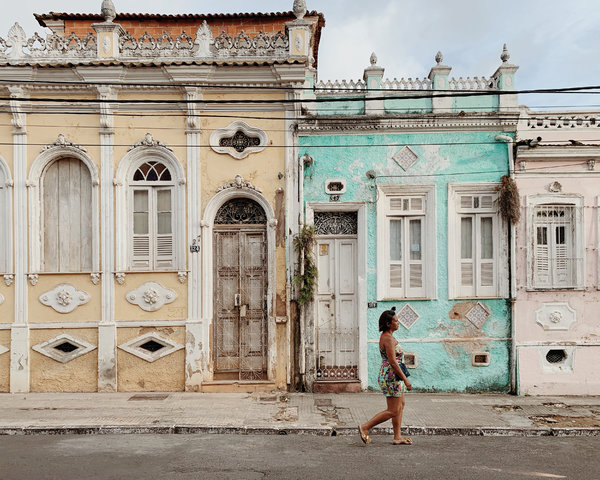 Mouraria is a quiet, low-slung neighborhood of cobblestone streets with restaurants and bars that have been gloriously not prettied up for visitors. It’s also the place locals come for lambretas, a local clam so flavorful and juicy that when the waiter at Mistura Perfeita brings out a potful with onion and cilantro (19.90 reais), it’s accompanied by a glass of excess broth. The dish will serve two if you start with overstuffed crab meat pastéis, the Brazilian version of an empanada. Try a caipirinha, the traditional Brazilian cocktail made with lime, sugar and cachaça (a liquor made from sugar cane). You can order it here with umbu, a citrusy-tasting green fruit sometimes called a Brazil plum. Should you care for dessert, wandering salesmen unrelated to but tolerated by the restaurant will take care of your needs for around 5 reais.

Bar do Espanha was a traditional corner bar run by a Spanish family in Salvador’s downtown neighborhood of Barris starting in 1920. But in 2017, when its 90-year-old owner planned to close it, two young clients arranged to buy the place. Arthur Daltro and Uiara Araújo changed its name slightly to Velho Espanha, preserving the wooden ceilings, restoring the tile floors and maintaining a simple, affordable menu of beer and bar snacks. Weekends bring live music to the cramped interior, where you might find groups playing samba or a local (and self-explanatory) genre called samba reggae. There’s no cover, and few covers, since the owners favor bands that compose their own music.

Leaving Salvador without trying moqueca would be as absurd as a pizza-free trip to Naples. The local seafood stew is cooked with coconut milk and bears the orange hue of dendê oil (sometimes called red palm oil). The version served at the no-frills Donana restaurant is highly regarded: It was ranked No. 1 in town by the Comer e Beber (Eating and Drinking) Awards, and No. 2 in town by one of the waiters, as in “only my mom does it better.” The shrimp version is dense with the day’s catch and comes with rice, pirão (a polenta-like manioc dish) and dendê-tinted farofa (toasted manioc flour) for 108.90 reais (for two).

Jorge Amado is Salvador’s favorite literary son, his novels often doubling as portraits of 20th-century Salvador and the state of Bahia. The house he shared with his second wife, Zélia Gattai — also a writer of renown — until he died in 2001 is now a museum. A Casa do Rio Vermelho (20 reais), named after its seaside neighborhood, houses their quirky art collection, heavy on the frogs, as well as his library, letters to other famous authors and a multimedia display of famous Brazilians reading passages of his work. (“Dona Flor and Her Two Husbands” would be a good pick to prepare for your trip, either in print or Golden Globe-nominated film form.)

The Guerra family’s restaurant and nearby bar have turned a homey little plaza in the Garcia neighborhood into an eating and drinking destination. First came Larriquerrí, serving what his son Gabriel calls “affective memory cuisine:” family recipes he and his brother, Guilherme, grew up eating from their mom’s (Rosa) kitchen. Trouxinhas de carpaccio, bundles of thin-sliced beef stuffed with ricotta cream and topped with pesto and Parmesan, explode in your mouth with modest decadence. The apricot-and-Brazilian-cheese-filled mezzaluna pasta in Gorgonzola sauce is gloriously unsubtle. So is the atmosphere, a bit chaotic as Romildo, the father, races around, attempting to charm every guest (and succeeding). Dinner for two with wine is about 250 reais. Nearby Larribar is one of the few spots in town that takes cocktails seriously. Watch as your bartender traps smoke from a burning cinnamon stick in the glass that will soon be filled with your Ventura (25 reais), essentially a smoked cachaça sour.

Walkable Rio Vermelho, on the ocean side of the city, is one of Salvador’s night life hubs. You might start at Chupito, or Shot, where the specialty is, predictably, shots. Not tequila shooters; they’re more like mini-cocktails, with seemingly infinite choices posted on the wall, and a D.J. commanding a tiny dance floor. A short waterfront stroll away, Teatro Sesi has live Brazilian music on the “veranda” (cover 20 to 30 reais). Or sit outside with a beer at the festive Praça da Dinha, or Dinha’s Square, named for the former owner of a stand selling acarajés, black-eyed pea fritters with or without shrimp (another Salvador classic).

Unlike the touristy Mercado Modelo in the Lower City, the waterfront Feira São Joaquim is a massive, dingy, half-renovated market where, in addition to countless fruits and meat and organs, you’ll also find medicinal herbs, dendê oil, infused cachaças, even cords of rope-thick tobacco. The highlight is the wide variety of religious items, like the handcrafted crowns and swords and more in a shop called Ilê Alacorô. (Have breakfast before you come, unless you dare try a hearty mocotó — cow’s foot stew — at one of the waterfront restaurants.)

A half-hour up the coast on the ocean side is the artsy Itapuã neighborhood, best known as the former home of Vinicius de Moraes, the famed poet and bossa nova lyricist. You can pose seated next to an amiable, potbellied statue of him in a small plaza outside his former home. (Or be the only visitor in recorded history who doesn’t pose with it; your choice.) The best seafood in town is at the nearby white-tablecloth Mistura, where elegant waiters serve an upscale crowd, often somewhat jarringly dressed in Sunday T-shirts and flip-flops. The prix fixe is an astonishing feast for a bargain 129.90 reais: Pile up your plate at the appetizer buffet (sea bass tartare, oysters gratin), then watch as a string of shellfish appetizers are followed by a main course (octopus risotto, perhaps?) and dessert. You’re a 15-minute drive from attractive Praia do Flamengo (Flamengo Beach), if you want to laze the day away at a beachfront club like Lôro-Stella Maris.

The pleasant, relatively safe neighborhood of Rio Vermelho has restaurants, night life and beaches. It’s the perfect place to rent an apartment (Airbnb has several listings), with one-bedrooms mostly under $40 a night, not including fees.

The Palace Hotel (Orson Welles and Pablo Neruda slept here) fell out of favor in the 1980s and closed in 1997. It reopened, restored to its former Art Deco glory, in 2017 as the Fera Palace Hotel, attracting a new generation of international figures, like Malala Yousafzai. Rooms start at 353 reais; ferapalacehotel.com.br.

Though pousadas (inns) dot Pelourinho, consider staying in Santo Antônio Além do Carmo. Pousada des Arts is a fancifully art-filled spot with spacious (if creaky) rooms, an extensive breakfast served overlooking the bay and a pet turtle. Rooms from 220 reais; pousadadasartes.com.br. Pousada do Boqueirão is run by Italian expat siblings Fernanda and Nino Cabrini and is lovely as well, unless you require a television. Full-sized rooms from 380 reais; pousadaboqueirao.com.br. 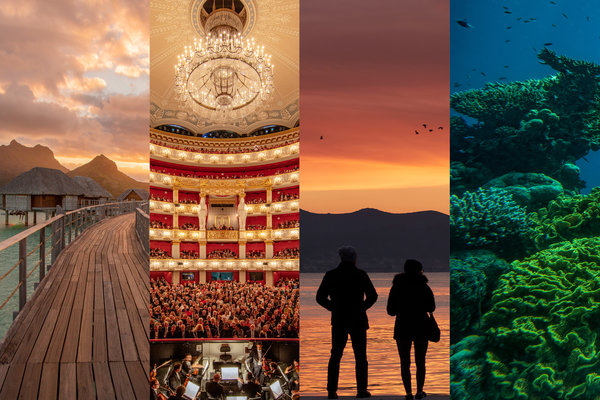 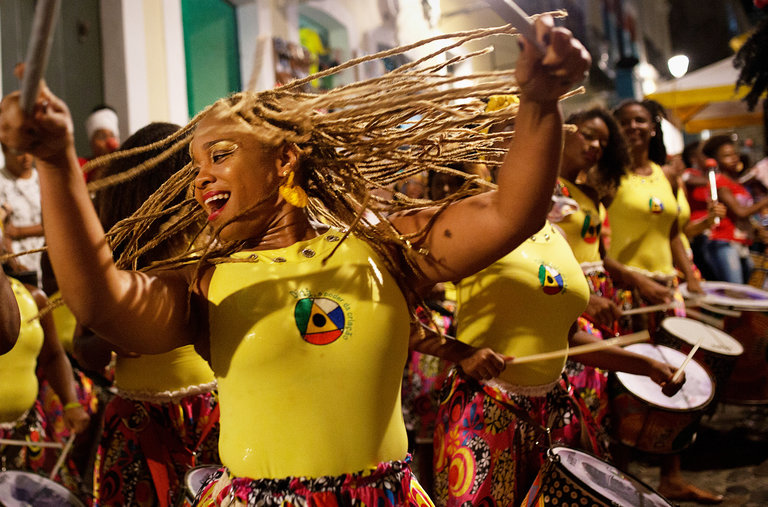