‘A light that guides me’: American Airlines CEO attends wedding of Southwest flight attendant year after in-flight talk on racism 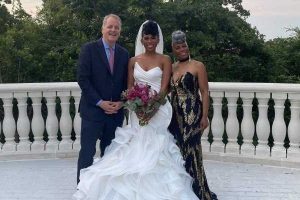 American Airlines CEO Doug Parker and Southwest Airlines flight attendant JacqueRae Hill met on a flight to Panama City, Florida, in May 2020. Hill noticed a copy of a popular book on white privilege in his seatback pocket and struck up a conversation about racism. (Photo: JacqueRae Hill, Special to USA TODAY)

Remember the Black Southwest Airlines flight attendant who struck up an emotional conversation about race with American Airlines CEO Doug Parker a year ago after noticing a book on white privilege in his seatback pocket?

She got married in Dallas  over Memorial Day weekend and Parker was among the guests.

Parker and JacqueRae Hill, now Sullivan, have stayed in touch since the viral meeting, which came against the backdrop of the protests over the killing of George Floyd by a white police officer. Sullivan’s mother works for American Airlines at Reagan National Airport.

Parker posted a photo taken with the bride and her mother, Patti Anderson, on his Instagram page, and Sullivan posted some wedding photos featuring Parker in a Facebook post on Monday under the headline “How it Started vs. How it’s Going.”

“I want to highlight a family that have now become special friends of my family. The Parkers!” Sullivan said in the post.

The 39-year-old flight attendant, who has worked for Southwest for 15 years, called their meeting a year ago “divinely ordered’ and thanked Parker for staying in touch.

Parker wrote this note to Southwest Airlines flight attendant JacqueRae Hill after the two shared an emotional discussion about race on a flight to Florida in May 2020. (Photo: JacqueRae Hill, Special to USA TODAY)

“Thank you and your family for showing up for so many people but also making the time to show up for ME on my special day,” Sullivan said in the Facebook post. “You have no idea how much it means to me to know someone that really walks out all of he talk out. Ya’ll Doug Parker is the real DEAL.”

“She started a courageous conversation with me about race in America and it’s one I’ll never forget,” Parker said. “She continues to be a light that guides me as we work to tear down barriers that create systemic racism.”