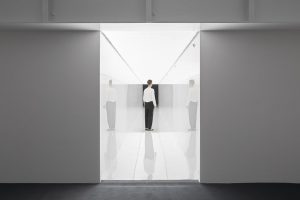 Missed out on tickets to Yayoi Kusama’s Infinity Mirror Rooms? Check out this exciting new immersive exhibition by Ryoji Ikeda, which is coming to London later this month.

With only a few days left to go until lockdown restrictions ease again on 17 May, you might be thinking about how to make the most of your newfound freedom.

As part of the government’s roadmap, this Monday will mark the reopening of cinemas, indoor dining, theatres, museums and, perhaps most excitingly, galleries and art exhibitions.

Of course, one of the most hotly anticipated exhibitions coming to London in the next year is Yayoi Kusama’s Infinity Mirror Rooms, which will open at Tate Modern on 18 May. Tickets for the exhibition – which currently go up to 24 October – sold out incredibly quickly when they went on sale last week, with the next set of tickets not scheduled to go on sale until September. So, if you didn’t manage to get your hands on some tickets, you’re most certainly not alone.

However, if you’re still in the mood to visit an immersive exhibition this summer, we might have some good news for you. Alongside Yayoi Kusama, there’s another exciting Japanese artist bringing their immersive work to London later this year – none other than Ryoji Ikeda.

If Ikeda’s name doesn’t ring a bell for you, his work just might. In 2014 his work spectra – 49 powerful spotlights which shine a large pillar of white light into the night’s sky – took over the London skyline to commemorate the 100-year anniversary of the outbreak of the First World War.

Ryoji Ikeda is known for his work spectra, which came to London in 2014.

While his new exhibition, which is taking over space at 180 The Strand from 20 May, may not be quite on the same scale, it still encapsulates all of the incredible technological, immersive elements Ikeda is known for.

As the largest exhibition of his work ever staged, the new event will allow viewers to be completely immersed in Ikeda’s “dynamic digital universe”.

Incorporating aspects of both sound and light, the works on display include no return – “an intense audio-visualisation that creates a virtual experience akin to entering a black hole” – and spectra III, a tunnel of strobe lighting.

Ikeda uses a mix of sound and light to create his works.

While the intensity of Ikeda’s work may not be for everyone, it’s definitely worth giving it a visit if you’re a fan of immersive exhibitions – just make sure your eyes and ears are ready to take it all in.

RYOJI IKEDA, presented by Fact Magazine and The Vinyl Factory in collaboration with Audemars Piguet Contemporary, is at 180 Studios from 20 May-1 August. You can find more information and buy tickets on the 180 The Strand website.