Blake Shelton Surprised by Old Bandmate on The Voice Premiere: 'Haven't Seen This Guy in 25 Years' 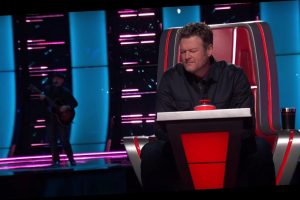 Blake Shelton experienced a blast from the past during the season 20 premiere of The Voice.

Singer-songwriter Pete Mroz, a former Nashville bandmate of Shelton's, surprised the country star as a contestant during the first round of blind auditions on Monday's premiere, performing a rendition to Blind Faith's "Can't Find My Way Home" that earned chair turns from both Shelton, 44, and John Legend.

After Mroz's performance, he began introducing himself to the judges lineup and jokingly told Shelton, "I'm going to get to you."

However, Shelton was still in the dark about the pair's past, responding, "Sounds like there's some history there. That's normally not a good thing for me."

But once Mroz explained that he was once a member of a Nashville band called the Young Riders under the name Pete Mitchell, Shelton finally realized that he and Mroz go way back.

"Oh my God, wow," Shelton said as he put his hands over his head in shock. He then told fellow judges Legend, Nick Jonas and Kelly Clarkson, "I was in a group also called the Young Riders with Pete."

"Are you serious?" said a shocked Clarkson, 38.

"I haven't seen this guy in 25 years," Shelton added of Mroz, whose family was watching the hilarious moment via Zoom. Shelton and Mroz went on to reminiscence about their time as bandmates, sharing anecdotes about when Shelton had "good hair" back in the day and seemingly stole a bass player from Mroz's band.

But Legend, 42, tried to use the pair's past to his advantage in an attempt to lure Mroz onto his team.

"I think the best way to get back at him for stealing your bass player, would be to disappoint him and join Team Legend," the "All of Me" singer joked.

But Shelton did not back down. "All we're gonna do is get the old group back together," the country superstar said.

"It's kind of like a full-circle moment for me," Mroz told host Carson Daly backstage afterward. "It's crazy to think that we sat around playing songs, and now here we are!"