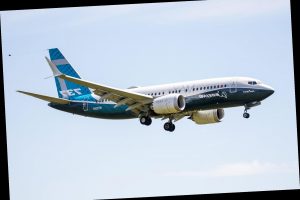 Boeing's troubled 737 Max jet is ready to take to the skies once more, according to aviation officials.

On Wednesday, the Federal Aviation Administration (FAA) issued an order that will allow the aircraft to carry passengers once again, nearly two years after the plane was previously grounded after two fatal crashes.

"The path that led us to this point was long and grueling, but we said from the start that we would take the time necessary to get this right," FAA Administrator Steve Dickson said in a video. "We were never driven by a timeline but rather followed a methodical and deliberate safety process. A process that ultimately took 20 months to complete."

Dickson added that the FAA employees who were involved in that process "diligently worked on the fixes that were necessary to address the known safety issues that played a role in the tragic loss of 346 lives aboard Lion Air Flight 610 and Ethiopian Airlines Flight 302."

Regulators across the globe grounded the jet back in March 2019 after an Ethiopian Airlines flight operating the Boeing 737 MAX crashed shortly after takeoff, killing all 157 passengers on board. It was the second fatal crash involving this aircraft model in five months.

Previously, in October 2018, a Lion Air flight went down off the coast of Indonesia under similar circumstances, resulting in the deaths of 189 people. A total of 346 passengers and crew members on both planes were killed in the crashes.

Investigators attributed the two crashes to an array of issues, "including engineering flaws, mismanagement and a lack of federal oversight," according to The New York Times.

It was later discovered that "a safety feature meant to stop the plane from climbing too fast and stalling had improperly forced the nose of the plane down, causing the crashes," per CNN.

CNN added that the new proclamation is just the first step in allowing the jet to fly once again, as the FAA is a U.S. regulating body and therefore only applies to domestic flights including those operated by American, United and Southwest Airlines, which have 737 Max planes in their fleets.

Flights looking to go to or travel within other countries "will need the approval of those nations' aviation authorities," the outlet added.

The FAA also shared that before any of the jets can fly with passengers once more, "the necessary changes to the 737 Max identified in the approval process must be installed and the FAA must inspect the individual planes." Pilots will also be required to complete additional training.

Overall, the process of getting the 737 Max back into the sky "is expected to take between a few weeks and a few months," per CNN, depending on the airline.