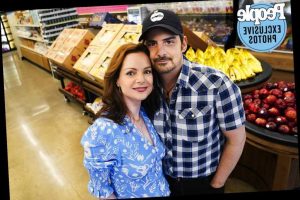 At Thanksgiving time eight years ago, when Brad Paisley and Kimberly Williams-Paisley were staying with their sons Huck, now 14, and Jasper, now 11, at their second home in California, the couple was facing a problem familiar to many parents: "Basically our children were acting spoiled," says Brad, 48. "They needed to realize that there were people in need and they needed to see hunger."

Recalling her own childhood, when her mother, a fundraiser for non-profits, would bring her along to volunteer at food pantries, Kimberly called a friend for a recommendation on where they could take their children to teach them that lesson. "You need to go to Unity Shoppe," they said. A free grocery store in Santa Barbara, California, that provides assistance to people with temporary food insecurity, Unity Shoppe also puts a priority on respecting its clients.

"[My mother and I] used to go to a food bank and we'd dole out peas and turkey to people around Thanksgiving, and I always sensed a little bit of resentment and I don't think I fully understood why until I got older," says Kimberly, 49. At Unity Shoppe, where customers can roam the store's aisles freely and choose their own groceries "people have that sense of dignity and choice and it's different from getting a handout," she says. "It was transformative for us bringing the kids in and letting them see that, letting them normalize and sort of erase the margin."

The experience — and several repeat visits the family made to volunteer there — inspired the couple to bring a similar shop to their hometown. On March 12, 2020, in partnership with Belmont University, the couple opened The Store, a free referral-based grocery store in Nashville that works together with the university, which offers health and legal aid as well as music therapy to customers, to help people lift themselves out of food insecurity. "This has been our dream," Kimberly says. "People will be able to come and shop with dignity and make choices for their family."

Watch the full episode of People Cover Story: Brad Paisley and Kimberly Williams-Paisleyon PeopleTV.com or on the PeopleTV app. Opening its doors just as the pandemic began meant that The Store had to quickly change its model from an in-store shopping experience to offering pick-up service for families and grocery deliveries to seniors. More than 350 volunteers have pitched in to help in the past year, including Kim and Brad, who have spent time delivering groceries (some customers called The Shop in disbelief afterward: "Brad Paisley was in my hallway!").

"Delivering these meals, it really is emotional," Kim says. "When you pull up and they're waiting, they're waiting in the door. And I think, 'What would they be doing if we weren't showing up today?'" In the one year it's been operating, The Store has delivered enough free food to make nearly 1.3 million meals.

When developing The Store, which has a full-time staff of four and currently serves about 750 families in an area of Nashville known as a food desert without easy access to grocery stores, the couple was adamant about maintaining the respectful ethos of Unity Shoppe, says The Store's executive director Courtney Vrablik.

"Our priority is our customer – and they are customers, not clients," Vrablik says. "No one is forcing them into a situation where they have to show gratitude." That meant creating a place where "everything feels normal when you're in here, like you're in a little corner grocery," says Brad, including warm wood shelving in the produce section, cheerful signs and lighting, and a mechanical pony that Brad found to sit outside the door. "Brad insisted it had to be here," Vrablik says. "To him, that was the sign of a true store." The whole family has been "deeply involved," Vrablik says, with the boys helping to stock shelves (and leaving some chalk art in the book nook kids' section that Kimberly designed), but the couple insists it has been a community effort. "The outpouring of support has been unbelievable," Kim says. "It's not just about us. We couldn't have done it if it was just us."

It's clear, however, that it is a passion project for them. "You don't go through all of this, all the time and energy, if you don't genuinely care," Vrablik says of the couple. "Seeing their faces when it opened was a noticeably special moment." Says Kimberly, "I think this is a big part of our legacy as a family, as a couple. It's of utmost importance to us." How you can help: To donate or for more information go to: https://www.thestore.org/