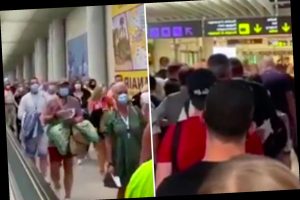 BRITS heading to Spain face "airport chaos" after the country introduces QR codes and health forms for all arrivals.

Majorca Airport passengers saw huge queues this week due to the confusion of the new system, with many claiming it hasn't been properly implemented. 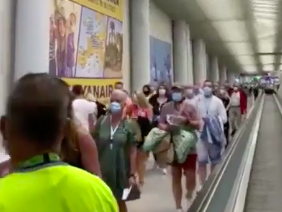 As of July 1, any Brits heading to Spain need to have a QR  tracking code which they then present on their arrival at their destination airport with their passenger health form.

But medical experts, unions and passengers say this is already causing chaos in the first few days since international borders were opened to Spain and will only get worse as floods of Brits are given the go-ahead to travel without the need to quarantine for 14 days when they return home.

The UK government has announced that from tomorrow, the Foreign Office will lift the advice against non-essential travel, and from July 10, will end the UK quarantine for people returning from Spain.

At the moment, Spanish airports are only dealing with a fraction of the flights but these will multiply by hundreds once Brits start to fly again in the usual numbers.

They say holidaymakers have been arriving with them uncompleted, fill out incorrectly or not in possession of a form or QR code at all – these then have to be checked or rectified, causing long waits in arrivals. 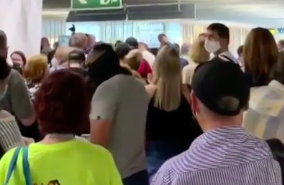 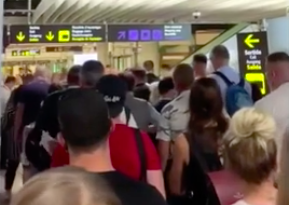 Tourists arriving at Palma Airport have been describing the scenes in arrivals as "chaos".

"It's terrible," one incensed passenger told the Spanish press after arriving at Palma Airport in Majorca.

Regular passengers to Spain say most of the airports can't cope at the best of times so there is "bound to be chaos" with this brand new rule.

They continued: "There were only two people to collect health information sheets from hundreds of crowded passengers. Our health is at stake."

President of the Association of Foreign Health Doctors, Mar Faraco said the situation at airports was going to be very difficult because of the lack of the right staff.

The Spanish government says it has told all involved in holiday bookings, from travel agents to airlines, about the new health forms and QR codes which can be obtained by email from 48 hours before departure.

It explains on its QR code site: "You must complete the entire Form from the website or the app, and from 48 hours before the flight you can send the form to the health authorities.

"Once sent you will receive an email with a QR Code that will allow you to access the destination airport. You must have it printed or on your mobile phone."

"Once at the airport (in Spain), you must show the QR Code that will be scanned at the health control, in order to access the terminal and collect your luggage."