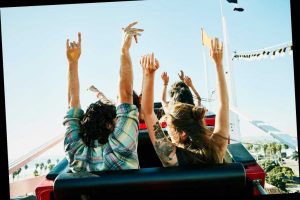 Theme parks in California can reopen next month after a year-long closure, but the roller coaster experience may be very different thanks to an unusual new rule: try not to scream.

The California Attractions and Parks Association (CAPA) advises in the new guidelines for its "Responsible Reopening Plan," that theme park visitors should avoid activities that increase the spread of COVID-19, such as singing, shouting, heavy breathing and raising one's voice.

This rule applies when visitors are on the parks' rides, meaning guests are recommended to stay silent on roller coasters that usually encourage people to do anything but.

In addition, face mask requirements and "modifications to seat loading patterns" are being implemented by the parks to "mitigate the effects of shouting," the guidelines state.

California's parks are not the first to promote an unusually quiet ride experience amid the pandemic: Japan implemented a no-screaming rule when it began reopening its amusement parks back in July 2020.

The Fuji-Q Highland amusement park outside Tokyo received a lot of attention at the time for its creatively worded request to roller coaster riders: "Please scream inside your heart." Major theme parks in California — including Disneyland, Universal Studios Hollywood and Six Flags Magic Mountain — have been closed since March 2020.

Disneyland is set to reopen on April 30 with 15 percent capacity. However, only California residents will be allowed into the park as visitors at this time.

"The day all of us have long been waiting for is almost here," Ken Potrock, president of Disneyland Resort, said in a press release Tuesday. "We're excited to have more than 10,000 cast members returning to work as we get ready to welcome our guests back to this happy place." While Disney World in Orlando, Florida has since reopened at limited capacity with mask mandates and distancing restrictions, stricter regulations in California previously demanded that the parks remain closed.

In November, Disney was able to open a portion of California Adventure for in-person shopping and dining only, but had to close its dining operations just weeks later due to rising cases in the area.

Last week, Disney CEO Bob Chapek revealed that he hoped the California parks would open by late April after state health officials announced that theme parks such as Disneyland may be eligible to reopen at a reduced capacity starting on April 1 as long as they passed new state safety requirements.