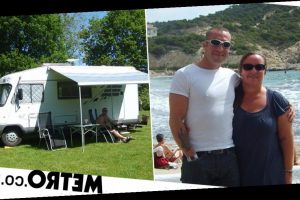 Claire Walker and John Allett are celebrating a special anniversary this year – it’s been 15 years since they packed in their jobs, sold their house and decided to live permanently in a motorhome called Betty.

Before their drastic change in lifestyle, the couple loved spending thousands on nice hotels and holidays, but felt they were constantly working to afford it.

So back in 2005, former retail manager Claire Walker and her plasterer partner John Allett, both 47, took drastic action – selling their £100,000 two bedroom flat and moving into a 3.5 tonne Hymer B584 Classic motorhome, despite having never even been camping.

Claire, who is currently parked up in Wantage, Oxfordshire saying: ‘Motorhome life means never knowing what the day is going to bring. Every day is different and what you make it.

‘I remember driving into the early hours on our very first day living in the van in the summer of 2005 and seeing the sunrise.

‘It felt glorious to be freely going where we pleased, with no time restraints, mortgage or bills and commitments – and that feeling has stayed with us ever since.’

Back in 2004, before they reached their huge turning point, Claire owned a two-bedroom flat in Cockermouth, Cumbria, which she shared with John.

They had been together four years after meeting through mutual friends, and loved to travel to nice places together.

Claire said: ‘I was addicted to Hilton hotels and, if possible, I’d stay at one of their five-star resorts each year. We were of the mindset that if your holiday accommodation wasn’t nicer than your current home, what was the point of going?

‘But it felt like we were slaves to the daily grind in order to afford everything. We’d get up, go to work, pay the mortgage and have a night on the town once a week.

‘It got to the point where I turned to John and said, “Surely there’s more to life than this?”‘

Initially, John’s solution to change their future surprised Claire but she soon came round to the idea.

Claire recalled: ‘John rocked up with The Motorhomers’ Magazine one evening and that’s where it all began.

‘We’d never discussed the idea of getting a motorhome before, but apparently he’d felt inspired after seeing a few on our way to the Lake District in 2003.

‘I wasn’t too sure at first, but I’d flick through the magazines he started bringing home after he was done with them.’

Then, in the summer of 2004, John surprised Claire with a trip to the York Motorhome and Carvan Show and seeing what they were really like convinced them to try living in one full time.

Putting their flat on the market, they sold it at the start of 2005 for around £100,000 and spent six months searching for the perfect new home on wheels.

Claire said: ‘I wanted a double bed that dropped down from over the cab. I wanted two captain chairs – which span round the whole way – to give the feel of a proper living room.

‘It goes without saying a toilet and shower were a must, too.’

That summer they purchased Betty – a white four-year-old 3.5 tonne Hymer B584 Classic for £28,000 from a dealership in Sheffield, South Yorkshire.

Claire said: ‘No one could quite believe we’d done it. When I handed in my notice, my old boss said she’d keep the job open for a year.

Kickstarting their journey by exploring the coastlines of Dorset and Cornwall for two months, as they had never travelled through south west England, they quickly fell in love with the freedom their new life brought.

Claire said: ‘I remember rolling into the Somerset coastal resort of Weston-Super-Mare and parking the van on the beach, getting the chairs out and sitting there all day.

‘There was no one else there. It was so serene and peaceful – we sat for ages looking at the sea and the sky.’

When it started to get colder as they approached winter, they decided to leave England for some sunshine.

So, they caught the ferry from Portsmouth, Hampshire, to Bilbao, Spain, before driving 500 miles to a campsite outside Alicante, where they spent the next six months.

John takes occasional jobs as a plasterer, while Claire scours jumble sales, charity shops and markets for all sorts of treasures to resell on eBay.

She said: ‘In the more remote parts of the country you can get some real bargains. I bought a designer bag for £28 and sold it for £375, although it’s not like you make a sale like that every week.

‘But we make enough to keep us afloat.’

After a decade and a half on the road, they’ve found some amazing places to visit.

Claire said: ‘We’ve found some beautiful hidden gems along the way. A stand out memory for me is the city of Cartagena, in Spain, which has the most incredible Roman remains.

‘We’d never heard of it before, but it was on the way and we decided to stop over. That’s something we’d never have done before.

‘Another real gem we always go back to is the Spanish town of La Manga, that sits on one of the largest salt water lagoons in Europe.

‘On first sight it looks like a strip of high rise hotels and apartments which is packed with northern European sun worshippers in summer.

‘But in winter the place is almost deserted and you can cycle along designated lanes, discovering little pine tree coves, empty beaches, and Spanish bars that are local hangouts.’

John has also been inspired to write a book charting their life on the road, which they hope may earn them some extra money.

‘It’s called Only Fools and Motorhomes and it’s about the past 15 years of our life really,’ Claire said.

‘It’s full of photos of our travels and tips and hints for other people who are interested in motor homing.’

The couple have no intention of returning to bricks and mortar life any time soon.

Claire said: ‘We have it hammered into us that we should live our lives a certain way, working nine to five and paying the mortgage.

‘But life’s what you make it. I love living in Betty and wouldn’t choose to do anything differently.’