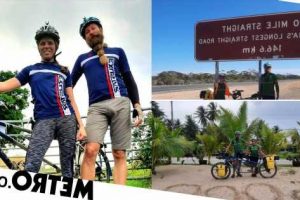 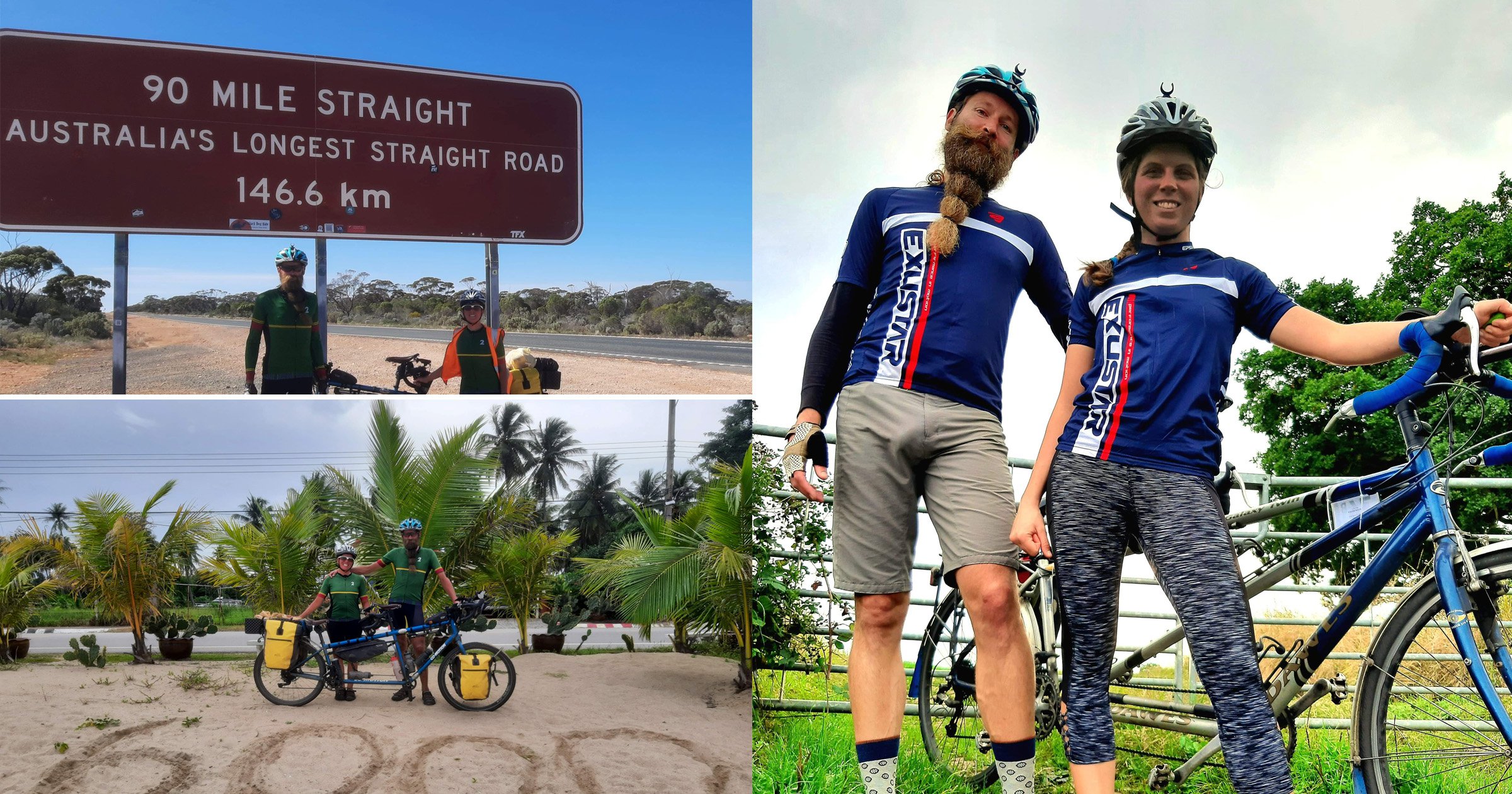 After going on a tandem cycle on their first date, this couple are attempting to break a world record by becoming the fastest to pedal around the world on a tandem bike.

Husband and wife, Steven Massey, 46, and Laura Massey-Pugh, 36 are attempting to set a new Guinness World Record by pedalling across five continents in just 180 days.

The active pair are already three quarters of the way around their journey – which will take them through 21 countries – after leaving their home in June.

They have 4,000 miles left to go on the final leg of their trip and are set to finish by early December.

They have also hit other bumps along the way – from a stomach bug in India, Visa issues in Azerbaijan and being knocked off their bike in Malaysia.

These issues meant they lost valuable time and to make sure they beat the current record of 263 days, Laura and Steven have only stopped once for a break.

Speaking from Thunder Bay, Ontario, Laura, a veterinary surgeon, says: ‘We’ve done over 13,500 miles and are just on schedule for 180 days.

‘The whole trip has been tough. The relentless nature of getting up, riding 100 miles or more every day, eating and sleeping is tough. We don’t get to sightsee at all.

‘We make a really big effort to have a positive mindset and support each other and break it down a day at a time.

‘Stevie has a tougher job on the bike, handling the weight of our kit and steering whilst I do the admin and planning, so I try and let him have more rest in the evenings.

‘Ironically and problematically, we were woken by a thunderstorm today. We’ve got a day of headwinds and hills ahead so it’s going to be a tough cycle and it can be pretty remote between places.

She continued: ‘We lost time early on due to sickness and border issues, but we’re pushing really hard to make up the time lost.

‘India was very challenging culturally and some of the roads were very bad. We also had to tackle sickness and monsoon weather.

‘In Malaysia when we were knocked off our bikes, I was left with bruised ribs and half of our panniers (bike bags) were destroyed which nearly end the trip.

‘Luckily, we were able to replace the bags and carry on.’

The couple have a passion for cycling and were inspired in lockdown by the current female tandem record holders.

Following 18 months of planning, the couple set off on their tandem world tour on June 5 and are currently covering over 100 miles a day.

While cycling the world, they have celebrated Laura’s 36th birthday and their fourth wedding anniversary on the road in Tbilisi, Georgia.

They are currently in Canada and are heading in the direction of Sudbury and then will move onto Toronto.

Afterwards, they will ride through Ottawa, Montreal and Halifax and then fly to Lisbon, Portugal.

Spain and France will be their final destinations before they cycle to Germany where they began the challenge.

‘We always knew it was be tough, but knowing is different from actually doing it,’ Laura notes. ‘It’s been massively important to look after each other and stay positive.

‘It’s really hard to think about how far we’ve come as we’ve still got a long way to go. This will be the first and last time we will do something on this scale. The whole trip has taken 18 months of planning and has been incredibly expensive.

‘We have self-funded the whole trip apart from some kit sponsorship.

‘We’ll be massively proud if we do get our record despite all the setbacks.’

As well as the record, the duo are raising money for three charities – Sustrans, Mind and Vetlife.

Donations to Laura and Steven’s big ride can be made at: https://http://www.stelatandem.com/