Home » Travel » Darius Rucker and Wife Beth Split After 20 Years: 'Our Priority Will Always Be Our Beautiful Family'

Darius Rucker and Wife Beth Split After 20 Years: 'Our Priority Will Always Be Our Beautiful Family' 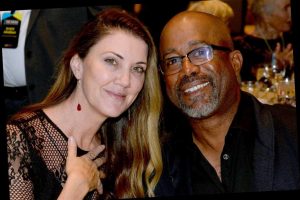 The pair first met in 1998 while she was working for VH1 in New York and Rucker was in town for a performance, according to Wide Open Country.

In a 2010 interview with The Boot, the star recalled telling Beth that he was going to marry her shortly after their first date. "She was walking up the stairs [to her apartment], and I said, 'Well, you know that I'm going to marry you, right?' She just laughed," he said.

"Her roommate or her boyfriend was up there in their apartment, and I yelled, 'To whoever's up there in Beth Leonard's apartment, you can just leave because I just want you to know that I'm going to marry her!' " Rucker remembered.

"It takes a strong woman to be married to a musician, especially a musician who was drinking and partying as hard as I was, and I think life for us is where we are now," Rucker told The Boot at the time. "It took a long time for us to get to where we are now, and we say to each other all the time, 'I love us. I love our family. I love us.' "

Last year, they launched the Just Be You organization, a nonprofit aimed to boost children's confidence through self-compassion and self-love.