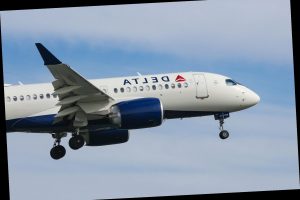 A Delta Airlines flight was forced to make an emergency landing on Monday night, Delta confirmed in a statement to PEOPLE.

The Airbus A319 had been carrying 43 passengers from Palm Beach, Florida, bound for LaGuardia Airport in New York when it diverted to John F. Kennedy Airport "out of an abundance of caution following a mechanical issue."

"The flight landed safely and without incident and maintenance is evaluating the aircraft," Delta said in the statement.

After the safe landing, the plane taxied to a gate on its own and all 43 customers onboard deplaned normally.

Despite initial reports that the incident occurred as a result of a possible bird strike or hail, Delta said they could not confirm the cause based on their evaluation of the aircraft.

A photo of the plane obtained by New York's ABC 7 shows what appears to be significant damage to the aircraft's cone, which looks bashed in.

The FAA is currently investigating the incident.

Earlier on Monday, Delta made headlines after announcing that they will once again be serving alcoholic beverages on certain domestic flights, after banning cocktails on their flights in mid-March amid the ongoing coronavirus outbreak, only serving bottled water to customers.

"In keeping with the Delta CareStandard, our goal is to serve all of our food and beverage offerings in the safest way possible — both for our customers and employees," said Allison Ausband, Delta’s Senior Vice President of In-Flight Service said in a statement.

"We take pride in always listening to our customers, and we know beer and wine are the adult beverages our customers want most," she added. "These selections are the first step towards a normalized beverage offering while we continue to keep customer and crew safety at the center of everything we do."