Discovering the story behind the world's most famous eau de Cologne 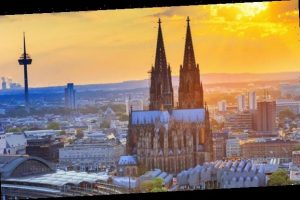 Eau for Cologne! Discovering the secrets of scents that gave this city the sweet smell of success 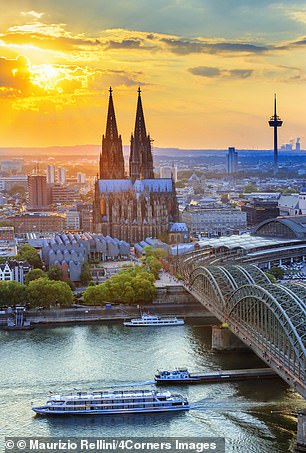 Fragrant: The city’s cathedral by the Rhine

For me, Cologne has always been the most fragrant of cities – whether it’s the spicy clouds of incense billowing out of its riverside cathedral, the wafts of salt-crusted pretzels on Schildergasse or Asprey’s Purple Water, courtesy of the toiletries at my favourite hotel – the Excelsior Hotel Ernst, founded in 1863.

From its fragrant interior, it’s easy to forget that Cologne once looked – and smelt – very different, although the upside to its former filthiness was the creation of the world’s most famous eau de Cologne: 4711.

‘In the 18th Century, locals always carried umbrellas but not because of the rain,’ says Helli Schummer, fragrance expert at Cologne’s House of 4711. ‘There were no flushing toilets, so people emptied their commodes out of the windows.’

Cologne, like many other cities then, was foul-smelling, dirty and riddled with disease. Luckily, in 1792, entrepreneurial German merchant Wilhelm Mulhens was given a recipe for a fragrant water by a monk who eulogised about its benefits. Mulhens started marketing it as a health-boosting elixir that could be added to wine or beer, and it was an instant hit.

However, its popularity almost caused its downfall. Napoleon’s thirst for the fruit- and herb-infused tonic is thought to be the reason he decreed, in 1810, that recipes for oral medications must be made public. Determined not to reveal his secret recipe, Mulhens started marketing his Kolnisch Wasser – which would eventually be renamed 4711 – as a refreshing fragrance, instead.

The House of 4711 on leafy Glockengasse is where Mulhens set up shop. Today, rooftop chimes start playing their hourly rendition of the Marseillaise, a nod to French troops who unwittingly shaped 4711’s history. After their commanding officer decreed that houses should be numbered, Mulhens named his elixir after his new address: 4711 Glockengasse.

Inside, apothecary-like fragrance displays glint under a chandelier made from perfume bottles and at the rear, an eau de Cologne fountain fragrances the air. Helli reveals that it was originally by the entrance but was relocated after visitors started filling bottles before beating a hasty retreat.

I sign up for one of the House of 4711’s fragrance seminars and spend a happy hour tinkering with different fragrance notes. Those with truly insatiable appetites for eau de Cologne can feast on a scent food menu incorporating 4711’s ingredients (the lavender-crusted steak is delicious).

There are hundreds of fascinating exhibits: slimline 4711 bottles designed to slot into the boots worn by Napoleon’s troops, historic 4711 adverts (including one that was banned due to depictions of scantily clad women) and fragrance bottles from the late 1700s. Some of the earlier bottles had cork stoppers and tiny corkscrews attached to the side. My favourite exhibit is one of the 4711 fragrance dispensers once found in railway stations. Anyone who needed a top-up could insert a few coins for a quick spritz. 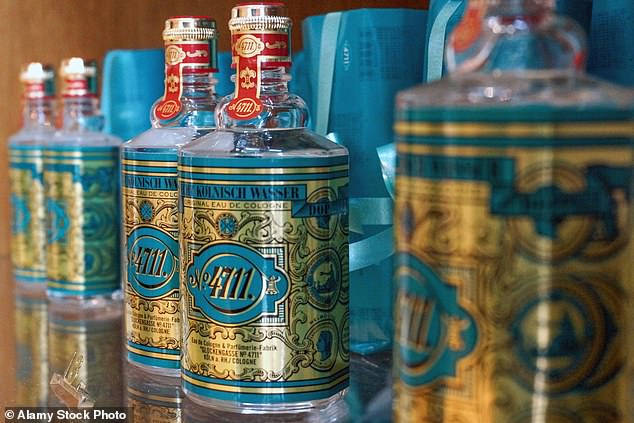 Refreshing: Pictured are bottles of 4711,  the world’s most famous eau de Cologne

Despite 4711’s rich history, the world’s first eau de Cologne is actually Farina. The business has operated out of a building on Obenmarspforten – within sniffing distance of the House of 4711 – since 1723. I visit in July and stifle a giggle when my guide appears. He’s dressed in breeches and a wig as Johann Maria Farina, the perfumer who founded Farina. He recalls the unsanitary conditions of 18th Century Europe, explaining that his frilly sleeves were worn to hide bitemarks of fleas, so common that locals carried portable flea traps – capsules containing human blood mixed with honey.

The blood lured thirsty fleas from hiding places such as warm armpits, and they would then stick to the honey, making them easy to dispose of.

Like Mulhens, Italian-born Farina wanted to mask Cologne’s unpleasant scents by creating a fragrance that reminded him of, in his words, ‘a spring morning in Italy’. It was a success, albeit an expensive one – one bottle cost about £2,000 in today’s money, although that failed to deter fragrance fiend Napoleon, who apparently doused himself in one bottle a day.

Farina marketed his cologne as a luxury one from the outset, adding a tulip logo. In the 1700s, tulips were imported, at great expense, from Russia, and were seen as status symbols. 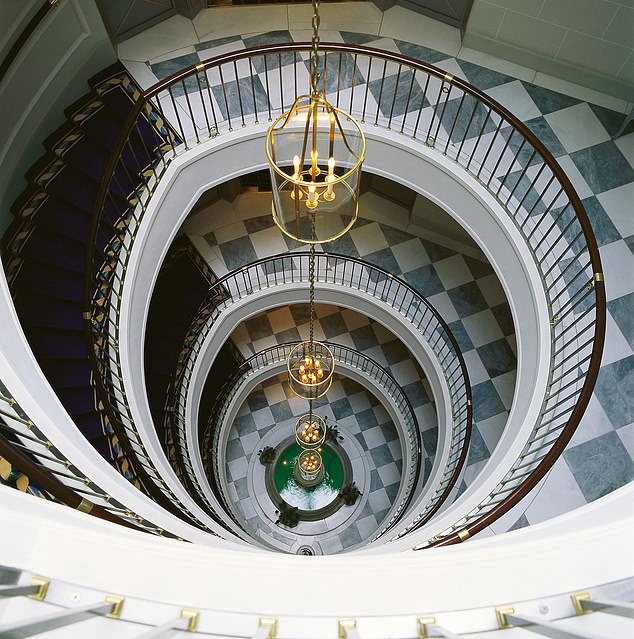 Elegance at Hotel Ernst, which The Mail on Sunday’s Tamara said is her favourite hotel

In Farina’s museum, exhibits include a display case engraved with images of Asian birds, created to seduce Chinese customers. The origami-like case folded down into the size of a suitcase so it could be shipped to the Far East.

I start noticing reminders of Cologne’s connections with fragrance around every corner. Behind the bar at Motel One on Cologne-Waidmarkt, 4711 is picked out in huge LED letters and armchairs are wrapped in teal – a nod to the bottle’s colour scheme.

At Cologne’s Romano-Germanic Museum, exhibits include fragrance bottles dating from Roman times. Found during excavations of nearby grave sites, the bottles resemble shells, sandals and birds.

The innovative approaches taken by Roman perfumers and by Farina and Mulhens – whether it’s shippable display cases or fragrance vending machines – not only put Cologne on the map but provided a breath of fresh air during the world’s darkest days.

And, three centuries after people started dousing themselves in cologne in the hope of staving off plagues, fleas and other unpleasantries, 4711 is enjoying an unexpected boost: Helli Schummer reveals that perfumed wipes are flying off the shelves, bulk-bought by hand-hygiene-conscious consumers weary of Covid-19.

British Airways has flights from Gatwick to Cologne from £49 one way (britishairways.com). Ryanair flies from Stansted to Cologne from £17.99 one way (ryanair.com). The Excelsior Hotel Ernst has double rooms from £243 a night (excelsiorhotelernst.com).