Disney Cancels All Cruise Lines Through June, Says It's 'Working Towards Resuming Operations' 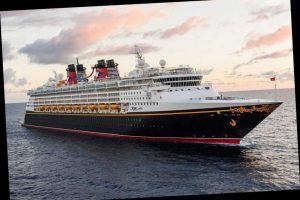 Disney Cruise Line has extended suspensions of it voyages due to the ongoing COVID-19 pandemic.

On Tuesday, the cruise line announced in an updated travel alert that all sailings have been canceled through June. The extension came following the Centers for Disease Control and Prevention's (CDC) new guidelines on how cruise lines can resume sailing. The guidelines include a requirement for test cruises, having COVID-19 testing centers on board and implementing enhanced health and safety measures.

"We are carefully reviewing the recently released guidance from the U.S. Centers for Disease Control and Prevention and working toward resuming operations," Disney officials said.

The ships are also affected by where they depart from and visit due to the continued suspension. Disney Dream and Disney Fantasy will now set sail on July 2 and July 3, respectively, while Disney Magic's European itineraries will remain paused through September 18. Disney Wonder's sailing season, meanwhile, remains up in the air due to restrictions from the Canadian government.

Guests whose vacations are affected and travel agents will receive an email from the company outlining details and next steps regarding the cancellations, Disney Cruise Line said.

In late February, Disney Cruise Lines announced that all sailings for Disney Wonder, Dream and Fantasy's ships were canceled through the end of May. Disney Magic's ships were suspended until Aug. 10 at the time. The CDC first issued a no-sail order on March 14, 2020 that was intended to stay in place for 30 days. At the time, several cruise ships across the world had become sources of major coronavirus outbreaks and subsequent deaths, including off the coast of Japan, Panama and Oakland, California.