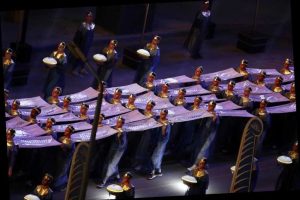 Nearly two dozen royal mummies were paraded down the streets of Cairo on Saturday to celebrate their big move from the city's Egyptian Museum to the new National Museum of Egyptian Civilization in the Fustat neighborhood.

In what the Ministry of Tourism and Antiquities called an "unrivaled, once in a lifetime event," the Pharaohs' Golden Parade featured 22 mummies — 18 kings and four royals — on a procession of vehicles decorated with pharaonic designs.

The mummies, which included Ramses II and Hatshepsut, were kept in climate-controlled cases during the hour-long journey alongside the Nile, according to the Associated Press.

Most of the mummies were from the New Kingdom, which ruled Egypt between 1539 B.C. to 1075 B.C., the outlet reported. They were originally buried around 3,000 years ago in the Valley of the Kings and the Deir el-Bahri site near Luxor. In addition to the mummies, the gala parade also featured 60 motorcycles, 150 horses, and a 21-gun salute, according to a press release for the event.

"By doing it like this, with great pomp and circumstance, the mummies are getting their due," Salima Ikram, an Egyptologist at the American University in Cairo, explained to Reuters. "These are the kings of Egypt, these are the pharaohs. And so, it is a way of showing respect."

The extravagant ceremony ended with Egyptian President Abdel Fattah El-Sisi personally welcoming the mummies to their new resting place at the National Museum of Egyptian Civilization.

"This majestic scene is new evidence of the greatness of this people, the guardian of this unique civilization that extends into the depths of history," he said in a statement translated from Arabic ahead of the event, adding that the parade was "inspired by the spirit of the great ancestors, who preserved the homeland and created a civilization in which all humankind is proud."