Everything you need to know about winter surfing in the UK 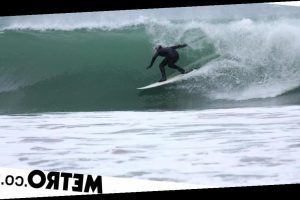 We drive over a hill and the view down to the coast is like a scene from a surf movie – long, slow-moving lines of swell roll in towards a wide bay, with just a handful of surfers enjoying rides, which go on for hundreds of yards.

But this is West Wales, not California or Queensland, and rather than swaying palms and golden sands there are wind-whipped conifers and frost-tipped fields above the break.

It’s early winter and I’m with a mate on ‘surfari’, safe in the knowledge that at this time of year the region’s beaches will be pounded by waves.

Indeed, if you don’t mind the cold winter is far and way the best time to surf in the UK.

It’s not even as chilly as you might expect – right now, water temperatures are about 13C due to the fact that the sea warms and cools much more slowly than the air and land. Admittedly, it does get pretty brisk by March and April, but in a decent wetsuit it’s no problem to enjoy a couple of hours.

Surfers in the know head to stretches of coastline where the surf only comes alive in the winter months, and that don’t feature on the plethora of internet surf reports, which brings another big advantage: fewer people.

This means more waves for those who choose to explore places such as England’s south coast, East Anglia, Cardigan Bay and Northumberland, all of which rarely see waves in summer. At times it can almost feel like you’ve drifted back in time to the days when surfing was a niche activity.

‘Try not to get cold before you start as you’ll find it really hard to warm up. Have a flask of tea or coffee to swig before and after your surf session, and don’t forget that winter swells generally pack a lot more punch than those of summer so don’t start too big.’

As I write, surfers in Cornwall are taking on 20ft waves generated by a string of deep Atlantic depressions typical of early winter, while the west coast of Ireland has just seen waves surfed that are well in excess of 50ft.

That’s a bit extreme for most of us but in winter a little searching around will almost always find a wave to suit whatever level of ability you have. Then all you have to worry about is how long it’ll take your toes to thaw out…

END_OF_DOCUMENT_TOKEN_TO_BE_REPLACED

END_OF_DOCUMENT_TOKEN_TO_BE_REPLACED
We and our partners use cookies on this site to improve our service, perform analytics, personalize advertising, measure advertising performance, and remember website preferences.Ok