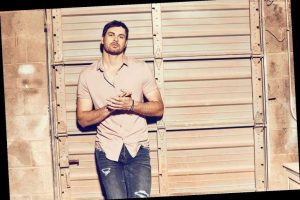 The coronavirus lockdown hasn't slowed Matt Stell down — if anything, it has only made him more creative.

Last month, the "Prayed For You" singer, 36, released his new track "If I Was a Bar" and its accompanying music video, which PEOPLE has an exclusive behind the scenes look at the making of.

Due to social distancing guidelines, Stell played all 13 different characters featured in the music video himself. So, he tells PEOPLE, getting ready for the shoot "was like packing for a trip to Europe."

"All those clothes were mine," he says. "Dustin Haney, the director, was able to really come up with something cool that was creative. It was a lot of fun."

Among the characters Stell plays in the video — which was filmed at Nashville’s Fleet Street Pub with only three crew members, including Haney — is "cool guy Matt," "post-breakup Matt," "drummer Matt" and "bartender Matt."

"I enjoyed them all, but the one we call Purnell Hawkins, the truck driver guy, was a lot of fun," he says. "So was the fiddle player, Atticus. He was a lot of fun to play because the first time we were filming I had to Google how to hold a fiddle, and it turned out I had been holding it backwards the whole time. So we had to do another take."

In the hilarious behind-the-scenes clip, Stell says they tried "to utilize all the silver linings from quarantine — like an empty bar where we can film and a homeless-level of facial hair that I have that we can exploit for some different looks." The extra time in quarantine has also allowed Stell to reflect on his journey, particularly his breakthrough 2019 after "Prayed For You" became the only debut single to top Billboard’s Country Airplay chart. The single also earned him more than 182 million streams and scored him an invite to perform at the Grand Ole Opry.

"It changed [life] in just every conceivable way," he says. "Before then I was a songwriter, and I still am, but that was my main thing. We wrote that one and we put it out, and it started to get its own momentum before we even knew what to think. At a certain point we cut a record deal, and that turned into a song on country radio, and then that turned into a No. 1 song for a couple of weeks. Just watching it grow organically and turn into something was really special."

A moment that sticks out in Stell's mind is the first time he heard the song play on the radio in a state where he has "never had mail sent to."

"I was in Vegas for something, and I got an Uber and it was on the radio," he says. "I was like, 'Ma'am, you're not going to believe this, but that's me right there.' That was a crazy moment. She was in disbelief for a little bit, like, 'Are you for real?' I was like, 'Yeah, honestly, that really is me.'"

Stell says it's crazy to think now how all of this almost didn't happen, as he once considered going into medicine and was accepted to the (post-baccalaureate) pre-medical program at Harvard extension school.

"I mean, there's a non-zero chance that I failed out," he says. "Let's be honest. But I hope that I would've been getting to help on the front lines with a lot of this stuff. That's what I wanted to do in the first place: try to help. It would be totally a different life, for sure, but I haven't regretted this path ever since I got the opportunity to write songs. I'm sure that there's way better, more qualified people that are helping people now."

After "Prayed For You," Stell released his single "Everywhere But On," the same title of his 2020 tour which had to be put on pause because of the pandemic. As to what he's looking forward to most when life resumes post-pandemic, Stell says it's "100 percent" going back out on tour.

"I can't wait to get back on the road with the guys," he says. "I can't wait to play these songs and some new songs for folks live. The second that they let us, we'll be there with bells on."