Founded in the once-rough East London district of Shoreditch in 2006 and rapidly expanding to progressive cities like Amsterdam and Portland, Ore., the Hoxton is like a naughty little sister to the popular Ace chain, replete with rose-colored velvet and china bunny sculptures. There is a certain inevitability to its arrival in Williamsburg, on a site formerly occupied by the Rosenwach Tank Co., which made the wooden water towers that are a familiar sight on the New York skyline. Damaged in a fire reportedly started by 20-somethings hurling Roman candles in 2009, the building was sold for millions and has been demolished and the space reconfigured, with help from the hospitality group behind the Soho House, as a sprawling playground for Generation Laptop.

The hotel is steps from McCarren Park, with its large swimming pool, and a more modest park on the East River that hosts Smorgasburg, a crowded outdoor food market, from April to October. The Museum of Food and Drink is another local attraction, with exhibits like “Knife-Wielding Girls: Popular Representations of Women and Butchery.” The Music Hall of Williamsburg, a rock club, is also nearby. The Hoxton is a six-minute walk from the Bedford Avenue Station — though beware the looming L train shutdown in April, 2019 — and twice as long from the Nassau Station stop on the G train, which runs in Brooklyn and Queens only. But street parking is plentiful. 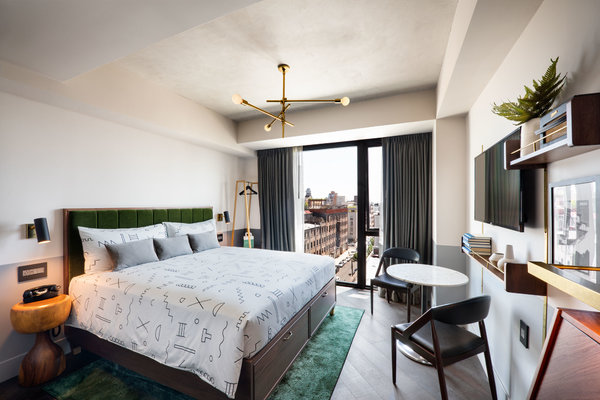 Priced at $350 for the Sunday night of a holiday weekend, our standard, 170-foot “cosy” room on the ninth floor had a glamorous view of Manhattan’s twinkling lights, a charming push-button telephone with free international calls (a perhaps redundant perk in the era of WhatsApp), and a useful flip-down desk — but an open hanging rack in lieu of a closet. Outfitted in squiggly patterned linens by Dusen Dusen, a Brooklyn designer, the bed was somniferously comfortable but seemed smaller than the advertised king size. A plentiful selection of literature by black authors included Zora Neale Hurston’s “Their Eyes Were Watching God” and Alex Haley’s “The Autobiography of Malcolm X.”

For a married couple wishing to keep the mystery alive, the frosted door did not afford complete privacy, but the subway and penny tiles were spanking-clean and the brass fixtures appealing. Toiletries by bl_nk come in eco-consciously large dispensers. Shower pressure was assertive, but there was no bathtub (they are available only in the hotel’s more-expensive “roomy” quarters).

Like its neighbors the Wythe and William Vale, the Hoxton’s crown jewel is its panoramic rooftop terrace animated by a thumping funk soundtrack, on which we shared a Deeper Purple cocktail ($14) with beet and lavender salt, blotting a spill with a black napkin that made the stain worse. The restaurant there, Summerly, has a limited menu, so we chose instead to dine at Klein’s downstairs, which has an open grill manned by chatty man-cooks. Our entrees of seared king salmon and charred Amish half-chicken with sautéed kale, the borough’s signature vegetable, were slow to arrive, but moist and flavorful (both $28). After another cocktail, the aptly named Endless Summer, failed to materialize, our server cheerfully offered a round of free prosecco. Carrot cake with coconut ($12) was completely scrumptious.

Morning hunger unsatisfied by a free “breakfast bag” that contained overnight oats, a banana and orange juice, we returned to the Klein for the a “full-on English brekkie” albeit with McDonald’s-style hashbrowns. Avocado toast ($12) is also offered, of course.

The hotel has no gym, but there are bikes available for borrowing (bring your own helmet). A charming suite of rooms called the Apartment, with fireplace and furry rug, can be rented as unconventional meeting space for your disruptive start-ups. There are plenty of crafting events offered, like a $20 workshop on making leather dog collars.

While catering to the realities (and some of the clichés) of youthful digital culture, the Hoxton has a surprisingly human, eclectic warmth.

Alexandra Jacobs is a longtime features writer, editor and cultural critic. She has worked at The Times since 2010. @AlexandraJacobs