Home » Travel » How to Pretend You’re in Singapore Tonight

How to Pretend You’re in Singapore Tonight 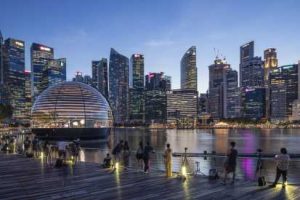 While your travel plans may be on hold, you can pretend you’re somewhere new for the night. Around the World at Home invites you to channel the spirit of a new place each week with recommendations on how to explore the culture, all from the comfort of your home.

It took over a dozen visits to Singapore for me to fall in love with it. But when I did, I fell hard. As a teenager living in Jakarta, Indonesia — just under two hours away by direct flight — I looked at Singapore’s shiny veneer and dismissed the whole place as shallow and materialistic. It was one big shopping mall, I thought, with too many rules and not enough character. But then, as I kept going back, I intentionally squashed my preconceptions and I started noticing other things. I quickly realized how much I had been missing.

There are the 19th-century, pastel-painted shophouses tucked away in neat rows between gleaming apartment buildings. As I crisscrossed the city-state — easy, thanks to a well-oiled public transportation network — I became obsessed with the open-air hawker centers, formalized street food markets where you can have the best meal of your life for a few dollars. I marveled at the city’s diversity, where ethnicities — Chinese, Indian, Malay and more — intersect in daily life. I grew fascinated by Singapore’s famous, if sometimes oversimplified, rags-to-riches story: how a fishing village transformed into a global metropolis.

And now, like anyone else who has had the pleasure of digging into a plate of chili crab or spending a balmy afternoon watching container ships float just off shore, I miss it. Thankfully, with a little work in the kitchen, a handful of books and some time in front of the TV, there are ways to make you feel like you are in the Lion City for a night.

Singapore’s cocktail scene has come a long way since the invention of the Singapore Sling over a hundred years ago at the famous Raffles Hotel — even if the guidebooks that still encourage visitors to drop $20 on a so-so cocktail suggest otherwise. Try your hand instead at the imaginative creations of Singapore’s more contemporary mixologists. Sasha Wijidessa, the former bar manager at Operation Dagger, an award-winning speakeasy in Singapore, now lives in Copenhagen and often turns to one of her inventions, the Annin Nai, when she wants a taste of home. It’s a combination of almond milk, dried osmanthus flowers and spirits, inspired by almond jelly, a dessert she ate growing up. “Making and having this drink fills me with nostalgia,” Ms. Wijidessa said.

Be your own hawker

OK, OK; we’re not going to claim you can recreate generations of gastronomical knowledge by following a recipe. But it is possible to at least channel the culinary spirit of a city where people pledge their loyalty to hawker stalls selling chicken rice and bak kut teh (a revitalizing pork-rib soup) the way that others might to sports teams. For something relatively simple, New York Times Cooking recommends mee goreng, or fried noodles. If you’re feeling ambitious, there’s this braised duck. Be warned: just reading the recipe will have you salivating.

Dr. Leslie Tay, the Singaporean food blogger behind the popular ieatishootipost, says you cannot talk about Singapore’s syncretic cuisine without mentioning pandan, a fragrant plant that grows across Southeast Asia. “It is our equivalent of the vanilla bean,” Dr. Tay said. “The aroma of pandan adds a subtle but unmistakable fragrance to most of our desserts here.” The most sought-after recipe on his blog, he told me, is his meticulously researched formula for pandan chiffon cake, a light and fluffy dessert. To get it right, Dr. Tay consulted old recipe books and spoke to countless chefs and bakers in Singapore. He says he finally nailed it on his 30th attempt.

You will forgive me if I am stating the obvious, but anyone looking to experience what it is like to fall in love with Singapore’s flavors as an outsider must start with that superfan of the Lion City, Anthony Bourdain. The chef-turned-globe-trotter returned to Singapore many, many times before he died in 2018. But it is in a 2008 episode of “Anthony Bourdain: No Reservations” where you can see him truly grasp the city’s appeal as he learns that eating in Singapore is a national pastime. “This, if you like food,” Mr. Bourdain said, as he sampled one of an endless array of hawker dishes, “might be the best place in the world.”

For an insider lens on the culinary heritage of the city, watch the Singapore episode of “Street Food: Asia” on Netflix. Interspersed with mouthwatering shots of hawker dishes, the show takes a look at the lives of the hawkers themselves as they work to preserve family secrets that run the risk of disappearing as younger generations move away from the hawker trade.

See the city on film

Moving from television to film — but sticking, for a moment, to food — Mike Hale, a Times television critic, recommends the film “Ramen Shop,” by the Singaporean director Eric Khoo. In the film, a young man goes in search of a family bak kut teh recipe. Along the way, the film explores the close links between identity and cuisine and the history of Japanese occupation of Singapore during World War II. In the end though, according to the reviewer Ben Kenigsberg, the film is mostly about good cooking: “It demands only your appetite.”

It is impossible to talk about Singapore’s role in film without mentioning “Crazy Rich Asians,” the blockbuster portrayal of Singapore’s 1 percent, based on the novel by Kevin Kwan. But, while the film is entertaining, it doesn’t exactly capture life in Singapore for most people. For that, Mr. Hale points to “Ilo Ilo,” a small-budget Cannes winner, which tells the story of a middle-class Singaporean family and the Filipina housekeeper who works for them during the 1997 Asian financial crisis. Sui-Lee Wee, a China correspondent for The New York Times and a native Singaporean living there now, agrees that film can be one of the best ways to channel the spirit of the city.

“I have spent 10 years away from Singapore, and Singaporean movies always bring me back home,” she said. “I love those set in the 1990s because it reminds me of the Singapore of my childhood.” Along with “Ilo Ilo,” she recommends “Shirkers,” the true story of one woman’s hunt for lost footage.

Part of the appeal of spending time in Singapore, whether physically or vicariously, is gaining a more nuanced understanding of the city-state’s history. That means moving beyond the established “Singapore Story,” which paints a rosy picture of unfettered capitalism. Sonny Liew’s stunning graphic novel, “The Art of Charlie Chan Hock Chye,” is a good introduction to all the other forces — geography, colonialism, one-party rule — that played a role in Singapore’s meteoric rise. It follows the story of a fictional cartoonist, Charlie Chan Hock Chye, from colonial times to the present day, portraying a far more complex origin story for the independent nation than the government’s long-held narrative. Deftly switching between artistic styles, each a tribute to a different comic book legend, Mr. Liew, a writer and cartoonist, offers deceptively complex political analysis, unexplored takes of history and transportive snapshots of the city through the ages. The scenes leap off the page, and it will feel like you are traveling not only across continents but also across decades.

There is no better way to sync up with the pulse of a city than on a long walk. For the next best thing, try a virtual tour like the one being put on every Friday by P.S. Yeo of the Everyday Tour Company. While her city tour is based loosely on “Crazy Rich Asians,” Ms. Yeo says you don’t have to be a fan of the movie (or even have watched it) to appreciate Singapore’s sights.

Ms. Yeo told me that participants in some of her tours turn it up a notch, like ordering in some kopi, a hefty coffee roast spiked with condensed milk. Or, if that isn’t available, she recommends preparing something at home, like her own satay recipe. It really does always come back to food in Singapore.

How are you going to channel the spirit of Singapore in your home? Share your ideas in the comments.

END_OF_DOCUMENT_TOKEN_TO_BE_REPLACED

END_OF_DOCUMENT_TOKEN_TO_BE_REPLACED
We and our partners use cookies on this site to improve our service, perform analytics, personalize advertising, measure advertising performance, and remember website preferences.Ok