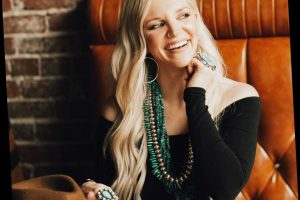 In a small community in the big state of Washington that former American Idol standout Britnee Kellogg has always called home, rumors spread fast. So, when she got word that her ex-husband might possibly be up to his old tricks with his new flame, the songwriter in her went to work.

And out came her very own viral song "Back of My Mind."

"It's a song that basically says that I feel for his new wife and I know what she might be going through," says Kellogg in a recent interview with PEOPLE about the warning cry of a song that has been viewed over 3.7 million times on TikTok. "Maybe I shouldn't feel like that, but I do. So, if she hears [this song], I want her to know that if she ever needs me, I'm here."

Indeed, she does. Because it was not more than 15 years ago that Kellogg found herself making the life-altering decision to put her dreams of a music career on hold in favor of marrying her high school sweetheart. And before she knew it, Kellogg was the young mother of one with another on the way.

She was also on the verge of divorce.

"It was just a real unhealthy marriage," Kellogg, now 36, remembers. "There was infidelity, and he was very mean and not supportive and very unkind." "From the outside looking in, he still hasn't changed," she explains. "But he's my boys' dad and they adore him. As much as I don't like the person he was in our marriage, I want my kids to see that we still have a level of respect for each other."

Following the couple's contentious divorce, Kellogg made the decision to audition for American Idol with two kids in tow, in the hopes that she could find a way to resurrect her musical dreams that she realized she had from the time she went to her first concert.

"I was 6 years old when my grandparents took me to see Johnny and June Carter Cash live in Portland," she recalls. "I remember every single thing about that night. I remember how the room smelled and what they were wearing. It gets me teary just thinking about it.

Kellogg adds with a laugh, "I remember leaving that concert and looking at my grandma and declaring that I was going to be a country singer and was not going to go to school anymore!" Kellogg started taking singing lessons and "performing everywhere," and at 15 years of age, she took her first trip to Nashville. And while the trip ignited within her a drive to ultimately become a country music star, life had other plans.

"I can't look back and wish I had done things differently, but yeah, there are times where I would now want to shake that 18-year-old and say, 'Get your ass to Nashville,'" she says quietly. "I chose to get married and have babies … and here I am. Looking back, I realize now that I spent far too much time sitting around waiting for him to give me some sort of permission to do what I had always wanted to do. I no longer have to do that."

And that, in part, makes Kellogg happier than ever. In 2017, she married an "amazing" new man, and they soon had a child together.

"After going through such an unhealthy relationship, I had a totally new set of parameters as to what I expected in a husband, and he hits all of them," says the now mother of three, whose oldest son is on the autism spectrum. "He's incredible." Kellogg's new husband is also the man that is now encouraging her to move forward in her pursuit of a country music career.

"My songs are 100% authentic, sometimes to a fault," admits Kellogg, whose wrote the revealing ballad "Back of My Mind" back in 2019 alongside Autumn McEntire and Eric Wickman. "Sometimes I will go into the writing room and I will have these lyrics that don't really rhyme, and I really don't care. I will fight with everything that I have to put music out there that is real and music that people want and need to hear."

And, in addition to being armed with a feisty attitude, Kellogg finds herself filling somewhat of a void in the genre as it stands right now.

"I think my music is touching a very untouched segment of the industry, those listeners over the age of 25 who are divorced and scared and hurt and feeling alone," says Kellogg, who makes the trip to Nashville to write and record at least once a month. "I'm hoping my music makes them feel not as alone anymore."

And personally, to have this song spark her career is nothing short of gratifying for Kellogg.

"For me, this song has turned into a totally full circle moment," she says. "I don't write songs for him to hear them and get upset. But for me to have this song be the one? It's like, I did it. I didn't need you. I did this myself. It's an amazing feeling."