Home » Travel » Jimmie Allen Teams with His Childhood Musical Heroes on His New EP: 'It's Been a Dream of Mine'

Jimmie Allen Teams with His Childhood Musical Heroes on His New EP: 'It's Been a Dream of Mine' 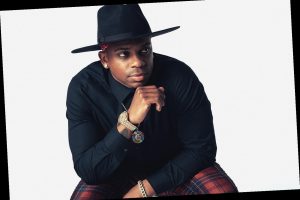 Though Jimmie Allen came up with the idea for his new collaboration project only a year ago, there's one track, "Why Things Happen," on the just-released EP that he's been wanting to do his whole life.

The yearning, R&B-infused song, which Allen co-wrote, teams him with perhaps the two most influential Black artists in all of country music history: Hall of Famer Charley Pride and genre-hopping hitmaker Darius Rucker.

"It's been a dream of mine since I was a kid to have a song with me, Darius and Charley," the 34-year-old artist tells PEOPLE. "For me, as a Black guy being a fan of country music, Charley Pride was 'the guy.' And then I grew up a huge rock fan, and Hootie and the Blowfish had a Black guy (Rucker), and it was one of the biggest rock bands of all time, and he's now one of the biggest country artists. So it was important for me to do something with both of them, and especially Charley."

Of course, the 86-year-old Pride, more than any other Black artist, broke down racial barriers in the white-dominated genre, forging a superstar career during the Civil Rights era of the 1960s. But for Allen, Pride's importance is more than historic. It's also personal: No one more than Pride reminds Allen of his father and grandmother, the two people who gave Allen his love for country music. He's named the EP Bettie James in memory of these two personal heroes. His dad, James Allen, died last year, and he lost his grandmother, Bettie Snead, in 2014.

"I wanted to start leaving some of their legacy through my music because they were super important to me," says Allen, "and they still are who I am as a person and who I look forward to continuing to become."

So how did "Why Things Happen" happen?

Allen's first connection was with Rucker back in 2008, a year after Allen's arrival in Nashville from his Delaware home.

"He played the Grammy block party and I wanted to meet him, so after the show, I snuck backstage and knocked on his tour bus," recalls Allen, who scored his second No. 1 in March with "Make Me Want To."

Rucker, 54, ended up inviting the then-unknown aboard for a chat and a photo. As Allen's star began its rise, their paths continued to cross. "We started talking on socials," Allen recalls, "and I gave him my phone number and we started talking and started our friendship over the last couple of years."

Allen was just as assertive in meeting his other idol, seeking out Pride at a Nashville industry event in 2017. The two hit it off, and the next year, they ran into each other again when Allen's Grand Ole Opry debut happened to fall on the same night as the celebration of Pride's 25th anniversary of Opry membership. Since then, a friendship also has blossomed.

Allen says their conversations are "like talking to a grandpa" — which can mean he's gotten his share of advice.

"One of the most important things he told me was 'be yourself,'" says Allen. "He said don't ever feel like you have to change who you are because of how you look. People might expect you to do something a certain way or sound a certain way. Be true to yourself and you will find your place. I just thanked him because, you know, he was living a country music dream at a time when Black people were getting hosed in the streets, still getting lynched. I don't know if I could have done it."

Allen first broached the idea of the multi-generational trio to Rucker, who got on board — as long as the song was a good fit. Allen's first pitch? Not so much.

"Darius said, 'I love this song,' but he was like, 'Man, I don't think the first song we do together should be a drinking song,'" Allen recalls with a laugh.

Back to the drawing board, Allen was seized by inspiration in January after the shocking death of basketball great Kobe Bryant. Along with co-writers Tate Howell, Cary Barlowe and Brandon Day, Allen wrestled in the lyrics with the "whys" of unspeakable tragedy: "It's hard not to question circumstances that leave you with nothing to say / Is there some kind of message? Some kind of lesson? Damn, life's hard to explain."

"You might not always get answers," Allen says, "but sometimes there's release in asking the question."

After he played the demo for Rucker, the "Wagon Wheel" singer declared it the perfect fit for the trio, and Pride quickly signed on.

The three artists recorded their tracks separately before the May 25 death of George Floyd that sparked racial justice protests across the country. Though the song wasn't intended to have a racial theme, Allen realizes it speaks to this moment, as well.

"I can definitely hear it now and how it definitely ties into kind of where we are," he says.

"Made for These," Allen's duet with Tim McGraw, is another EP song that's stirringly relevant to current events, with lyrics that offer a message of reassurance during struggle.

"I was taking the approach of just my journey and how I feel like the hard times prepared me for where I am now," says Allen, who co-wrote the song with Rob Grimaldi and Riley Biederer.

Allen says he immediately thought of McGraw as the go-to collaborator: "I called him and I said, 'Dude, remember you said you wanted to do a song? I'm cashing in my chip, bro.' The fact that all the artists said they would do a song, I was overwhelmed. To me, that's the greatest stamp of approval."

Allen cashed in more chips for other singing partners on the EP: Mickey Guyton, Nelly, Brad Paisley, and Noah Cyrus, who's featured on Allen's current radio single, "This Is Us."

One track, "When This Is Over," features a stellar tag team of artists — Rita Wilson, Christian artist Tauren Wells and the Oak Ridge Boys (another favorite of Allen's grandmother). The anthem, written by Zach Kale, Jon Nite and Laura Veltz, was written specifically in response to the pandemic: "When this is over / I hope I take a little less for granted / I hope I'm a little more understanding / when some things don't make sense."

"It got sent to me at the last minute by the label," Allen explains, "and I heard it and I loved it."

So what will Allen himself be doing "when this is over"?

Though famously a multi-tasking workaholic, Allen shies away from career talk and stays with the song's theme, saying he plans to keep striving "toward being a good person" and "look for ways to inspire" his 6-year-old son, Aadyn, his fiancée, Alexis Gale, and their daughter, Naomi, who was born in early March.

There's also a matter of a wedding, which was postponed in May because of the pandemic.

"Yeah, we pushed it back to next year, so I'm excited about that," Allen says with a grin. "Hopefully, it'll all be good."