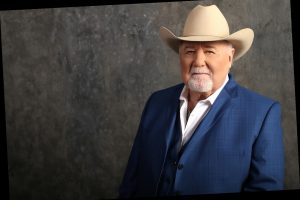 There are days in which country music legend Johnny Lee feels good, days when he can walk without his walker, his speech isn't slurred and he can sing as if the effects of his ongoing battle with Parkinson's disease has up and virtually disappeared.

But these days, those days are becoming somewhat fleeting. So Lee, 74, lives, and he performs, and he creates music that continues to showcase the strong, yet sweet voice fans have come to love via hit country songs such as "One in a Million," "Bet Your Heart on Me" and the No. 1 smash crossover hit "Lookin' for Love."

But he too knows all of our days are numbered, a reality that spurred him to finally record the one song that he has never been able to get out of his mind, even after all of these years.

"I heard Lee Ann Womack sing it on a show years ago and it just really hit me," Lee remembers of the song "Take Me Back to Texas," which premieres exclusively with PEOPLE. "So, when I found out they weren't going to release it, I was all over it," he says with a laugh. "I cut the hell out of it. I love that song." In its simplest terms, the song tells the story of a person reaching the end of their life and leaving a message behind as to what to do once they are gone.

"Yeah, I cried," the Texas native says of recording the song. "The first couple of takes, I was really having trouble keeping it together. But then, I was just like, 'OK Johnny, snap out of it. You gotta sing this song.' My brothers heard it and they tell me it feels like I'm leaving a message for them."

And just maybe, he is.

"I totally ugly cried when I heard my Papa Bear sing this song," recalls Cherish Lee, the daughter of Johnny Lee and his ex-wife, actress Charlene Tilton. "We talk about everything. I can tell him anything and he makes it better. And we have talked about what he wants after he moves on from us. It's a sad conversation but it's an important one to have. And originally, while my brother was still with us (Johnny Lee Jr. died in 2014), Dad wanted him and I to find the most beautiful field of blue bonnets in Texas."

"Then my Brother Bear and I would spread our father's ashes together. Plans have changed now that my brother has passed and it's going to be me," Cherish, 36, adds. "But I get it! Texas is different than any place I've been. It'll steal your heart if you're not careful." But make no mistake — at this very moment, Lee is feeling good. In fact, he recently played a show in Oklahoma City, albeit while sitting on a stool that he admits to downright loathing.

"I'm going to sing until I die," says Lee, who has undergone two brain surgeries in recent years to treat his Parkinson's disease. "I like to keep my band working. I'm fortunate that I still get to do this stuff. I look forward to going out singing. I don't look forward sitting on a stool while I am singing."

"But I don't think my fans mind," he adds — and the fans certainly do not. Back in November at the CMA Awards, Lee and longtime friend and collaborator Mickey Gilley were recognized for their contributions to the hit movie Urban Cowboy, with Old Dominion performing Lee's hit single "Lookin' For Love" from the movie. And based on feedback via social media from fans of all ages, they couldn't get enough of the Johnny Lee classic.

"They say that country music fans stick with you till the end," Lee chuckles softly. "Even after the end."

On the days not spent in the spotlight on a stage somewhere, Lee says he gets around just fine with his scooter or his walker, but he admits that he can't walk for a long time anymore.

And while his voice seems to be in top form on the new record — PEOPLE is also premiering his track "Pledge of Allegiance — he does deal with some hoarseness as of late, due to the simple fact that he hasn't performed as much as he would like due to the ongoing pandemic.

"I don't have any bad days, because every day is a gift," Lee explains. "A lot of my friends have had bad days, so I say prayers for them. But as far as I am concerned, every day on this side of the divot is a blessing."

"I'm just thankful that the music is left behind," he adds. "I feel like this album will forever show fans the real Johnny Lee."