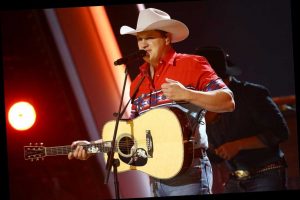 Joe Diffie will always be remembered.

At the 2020 CMA Awards Wednesday night, Jon Pardi gave a striking tribute to the late country star, who died in March from complications of coronavirus, with a performance of "Pickup Man."

Pardi, 35, hit the stage with a rendition of his most-recognizable song that had artists, including Ashley McBryde, dancing in the audience. The late legend's last name "Diffie" shone brightly behind Pardi as he performed.

The late star, who died at 61, told his fans that he had tested positive for coronavirus just two days before his death in March.

"I am under the care of medical professionals and currently receiving treatment after testing positive for coronavirus," he wrote on social media. "We want to remind the public and all my fans to be vigilant, cautious and careful during this pandemic."

Diffie, an Oklahoma native, became a household name in country music in the '90s with more than 20 Top 10 hits and 13 albums. The country hitmaker had five singles reach No. 1 on the charts, including his major hits "Home," "Bigger Than the Beatles," "If the Devil Danced (In Empty Pockets)," "Third Rock From the Sun" and "Pickup Man."

Diffie was a member of the Grand Ole Opry for 25 years and an Oklahoma Hall of Famer. He wrote for other country artists like Tim McGraw and was notably name-checked in Jason Aldean‘s 2013 single “1994” and Chris Young‘s 2019 single “Raised on Country."

Following his untimely death, many country artists paid tribute to the late legend on social media.

"Man… so sad to hear about @officialjoediffie passing. He was one of my country music idols," Thomas Rhett wrote on Instagram. "We played a few shows together back in the day. He was always so kind and encouraging. My prayers go out to his family and friends. Rest In Peace brother ill see you again one day🙌."

"Damn… this seems like yesterday, can't believe you're gone," added Luke Combs alongside a photo with Diffie and his dog. "Rest In Peace @officialjoediffie you were a legend."

Pardi, who won the new artist of the year award in 2017, is nominated in the album of the year category for Heartache Medication.

The 54th Annual CMA Awards are airing live from Nashville on Wednesday at 8 p.m. EST on ABC.