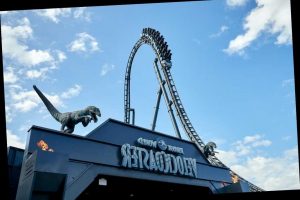 Jurassic World fans will have to wait another year for the concluding installment in the trilogy, which premieres next summer—but Chris Pratt, Bryce Dallas Howard and BD Wong are giving audiences something to hold them over.

The stars of the film will appear on Universal Orlando Resort's new VelociCoaster ride, which opens Thursday, June 10.

Located at the Islands of Adventure theme park, the new attraction will be Florida's fastest and tallest launch coaster. The ride soars 155 feet into the air, at 70 mph, as adrenaline junkies ride alongside Blue, Charlie, Delta and Echo, the Velociraptor pack from the movies.

The rollercoaster transports fans into a dynamic environment inspired by the Jurassic World films, bringing a new story to life with epic thrills and some familiar faces. Guests are greeted by Dr. Henry Wu (Wong), who introduces the ride as part of the park's newest "carnivore expansion." After some encounters with hungry Velociraptors, Claire Dearing (Howard) and Owen Grady (Pratt) offer some final words of warning, before the thrilling chase begins. Thrill-seekers will be catapulted through the raptor paddock, into the air, and just inches above water. A series of intense maneuvers includes near-misses, high speed launches, a barrel roll above the Island of Adventure lagoon and Universal's steepest drop yet, an 80-degree descent from the ride's peak.

Filming on the franchise's next chapter Jurassic World: Dominion wrapped in November, after 100 days of shooting and multiple international locations. The premiere was most recently pushed back a year to June 10, 2022. Universal Orlando reopened on June 5, with enhanced health and safety precautions in place. In addition to required face masks, temperature checks and social distancing, the park has implemented touchless payments and "virtual lines for some attractions, among other new measures."